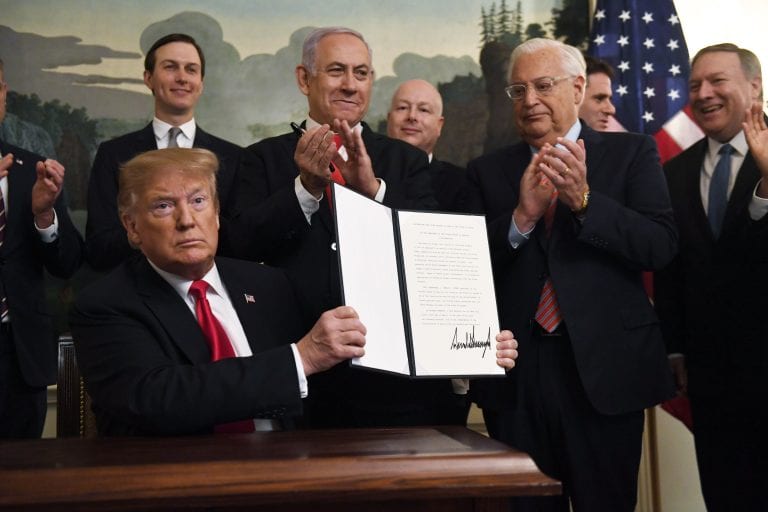 President Donald Trump holds up an executive proclamation recognizing the Golan Heights as Israeli territory at the White House in Washington DC on 25 March 2019 [Getty]
April 4, 2019 at 11:30 pm

International documents were adopted as an alternative to the military scenario on the Golan Heights, but after the US move this idea can be revived, she said at a news conference in Moscow.

"Washington's demarche in recognition of Israel's sovereignty over the Golan is so dangerous because it is a colossal strike at the international legal framework to address this issue," she said.

Documents, approved by the UN Security Council regarding the Golan Heights, have an international legal force and are mandatory to all UN members, she said.

The UN said the Golan's legal status would remain unchanged despite Trump's announcement and would still be considered an "occupied territory" under international law.

Israel occupied the Golan Heights from Syria during the 1967 Arab-Israeli War.

Turning to other issues, Zakharova announced Russian Foreign Minister Sergey Lavrov will meet the Egyptian president and king of Jordan during his visits to those countries on April 5-7.

Lavov will also meet the secretary general of the Arab League in Cairo.

"In the light of Egypt's chairmanship in 2019 in the African Union, it is planned to consider practical issues of coordination of actions for the preparation of the Russia – Africa summit scheduled for October this year in Sochi," she said.

The program will be continued in Moscow, where on April 8 Lavrov will take part in the opening ceremony of the 12th session of the Russian-Arab Business Council and 4th International Exhibition Arabia Expo 2019.