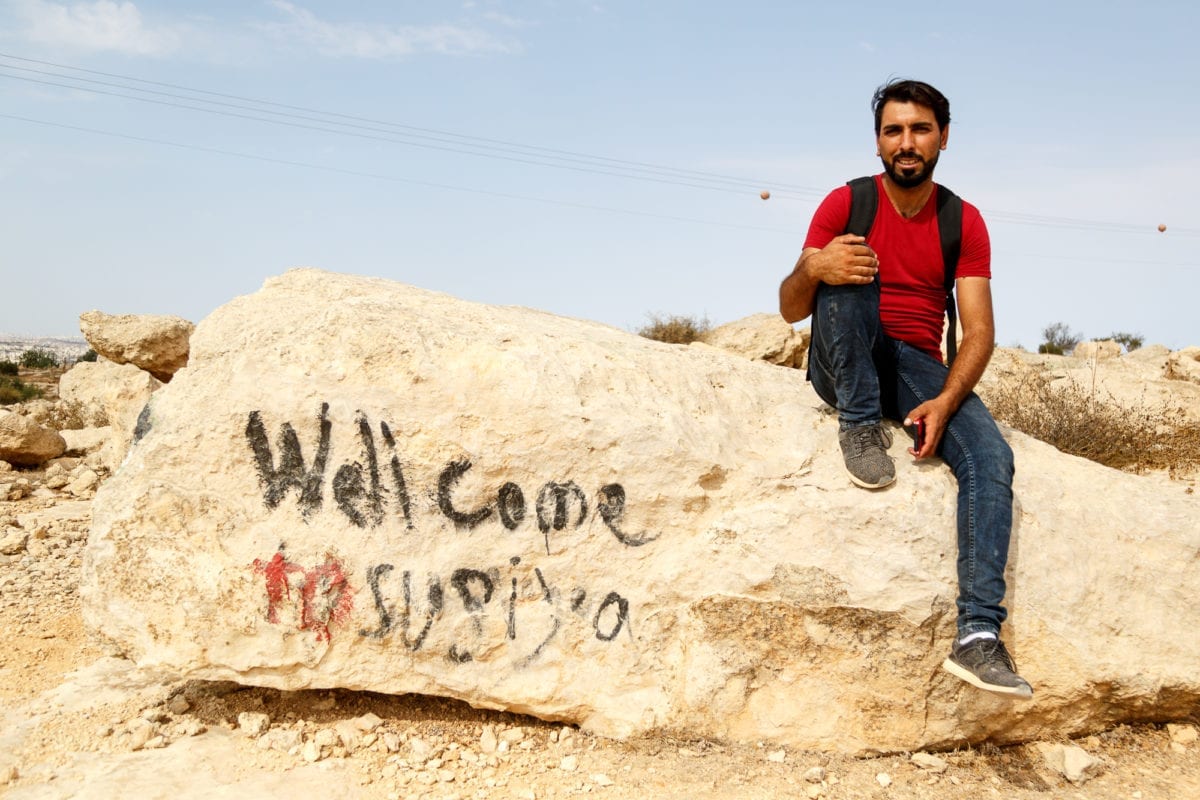 Ibrahim Nawaja, 30, has lived in Susiya his whole life, but now must live in Yatta with his wife as they cannot build in Susiya
Miriam Deprez
May 10, 2019 at 12:30 pm

A thin layer of white stone dust coats nearly every surface in the southernmost West Bank village of Susiya, situated in the South Hebron Hills.

The fine layer holds an added weight, occupying crevices, slowly encroaching under makeshift family homes, constantly being swept away only for it to return again.

But the dust is not the only force impinging on Susiya.

Thirty-year-old Ibrahim Nawaja gazed out over the brutal but idyllic rocky landscape of his home village and pointed to the Israeli military outposts punctuating the hillside horizon.

Perhaps only 200 metres from the village, olive trees planted by villagers now grow in no man's land. Ibrahim warned of the suffocating boundaries they must share with their new neighbours.

"We cannot walk or use the land there, once a man was shot by a settler just for walking his sheep. If I walk there now the Israelis will make trouble for me," he added.

Ibrahim Nawaja, 30, uncovers a rock which has the date of the 1997 Susiya demolitions inscribed into it

Shepherd walk with his sheep on the outskirts of Susiya

Susiya is home to about 300 Palestinians whose shanty-like village, like so many others within the Israeli-controlled Area C of the West Bank, is slated for demolition.

All "new" houses built in Susiya are the first ones to be demolished, Ibrahim explained. There are currently seven structures fighting in the high court to remain standing. But this cat-and-mouse game of partial demolitions and threats has been going on in Susiya for decades.

"We want to build more houses here," Ibrahim said. "I have been married for two years now, and I want to build a house for my wife and child next to my family home. But I can't, [the] Israelis will just come and knock it down."

But the entire town could be demolished at any moment, Ibrahim clarified, as it was all built without permits.

Under the Israeli thumb

The required building permits are virtually impossible to obtain forcing Palestinians to build houses "illegally" in the eyes of the Israeli government.

Even though Area C makes up 60 per cent of the land in the West Bank, UN figures show Israeli authorities have approved just 1.5 per cent of all permit requests by Palestinians between 2010 and 2014.

"Demolitions are part and parcel of a wider policy to get Palestinians to move out of specific areas, specifically Area C and East Jerusalem. This all comes hand in hand with the Israeli settlement enterprise," Abdallah said.

"Palestinians can challenge the military order in court, but it is very expensive," Abdallah said, adding that it is virtually impossible for a Palestinian to actually win their case.

It is not only the threat of demolition which makes life difficult for Susiya. Only a few months ago settlers forced a new family to leave their recently built house, Ibrahim explained.

"When I arrived there were 30 or 40 settlers sitting inside their home. The wife and children were forced outside, terrified, as the husband was at work."

"The husband then got a phone call from the Israeli police saying if they didn't leave, they would cancel his son's work permits for Israel," Ibrahim said.

The current pressure to demolish the Palestinian village of Susiya has been led by an illegal Jewish settlement, which is located near an ancient archaeological site from which both villages take their name.

The ancient Susiya site bears the remains of a 5th–8th century CE synagogue which was converted into a mosque in the early Islamic and crusader era in the 10th century.

In 1986, the site of Palestinian Susiya was declared an archaeological site by Israel, and Susiya was demolished. The residents rebuilt a few hundred metres southeast of the original site.

Since then, the old mosque has been converted back into a synagogue.

Scarring the village are the remnants of old cave dwellings and abolished structures where the community had been razed by Israel four times, in 1991, 1997 and twice in 2001.

The Palestinian Authority's Minister of the Commission Against the Wall and Settlements, Walid Assaf, said the future of Susiya is uncertain but believes the residents will rebuild if their homes are demolished.

"It's every Palestinian family's dream to own a house," Assaf exclaimed, explaining how many Palestinians are worn-out of being exiled by Israel.

At first glance, Susiya feels nomadic. The Bedouin style tent homes flap in the hot desert breeze. However, upon closer look the village itself has vital infrastructure, much of it donated by European aid.

German solar panels, Irish water pumps, and a children's playground funded by Italy, Norway and Belgium. The school, built in 2010 with help from Spain, now educates around 100 children from the village.

In December 2017, the EU itself called on Israeli authorities to halt plans for forced transfer of the population and demolition of Palestinian housing and infrastructure in Susiya.

But the international aid may not hold the political weight it used to. Assaf said a new tide of uncertainty under the Trump administration washes over Palestinians like never before.

According to Israeli organisation Peace Now, 14,454 settlement units in the West Bank have been approved since US President Donald Trump took office, three times the amount approved in the 18 months prior to his inauguration.

16-year-old Oudi walks through his home village of Susiya, one day he hopes to become an electrician

In 2001 Susiya was destroyed, including the cave dwellings where remnants remain

Assaf said since the Trump administration came to power, they have greenlighted the further annexation of Palestine.

Before Trump came, there was hope in negotiations. But with Trump now there is no hope, it is one-sided. He is supporting Israel in everything.

Assaf said they will never really know when the bulldozers will come rolling into town. "Where they will start and when they will do it, it depends on [the] political situation."

As the intense midday sun beat down on Susiya, Ibrahim stopped to kneel down and brushed the dust off a smooth rock face, uncovering chiselled Arabic writing in the stone.

"It has the date from 1997 when the village was destroyed once. Someone wanted to document what has happened here," he said, chuckling at the idea. "We have had to rebuild many times."

"We are not afraid of them demolishing our homes anymore. But we are tired," Ibrahim exhaled, the predicament of living under the constant unknown threat of Israeli bulldozers has taken its toll.

"We are tired of rebuilding over and over. We just want to be able to live in peace and use our land."