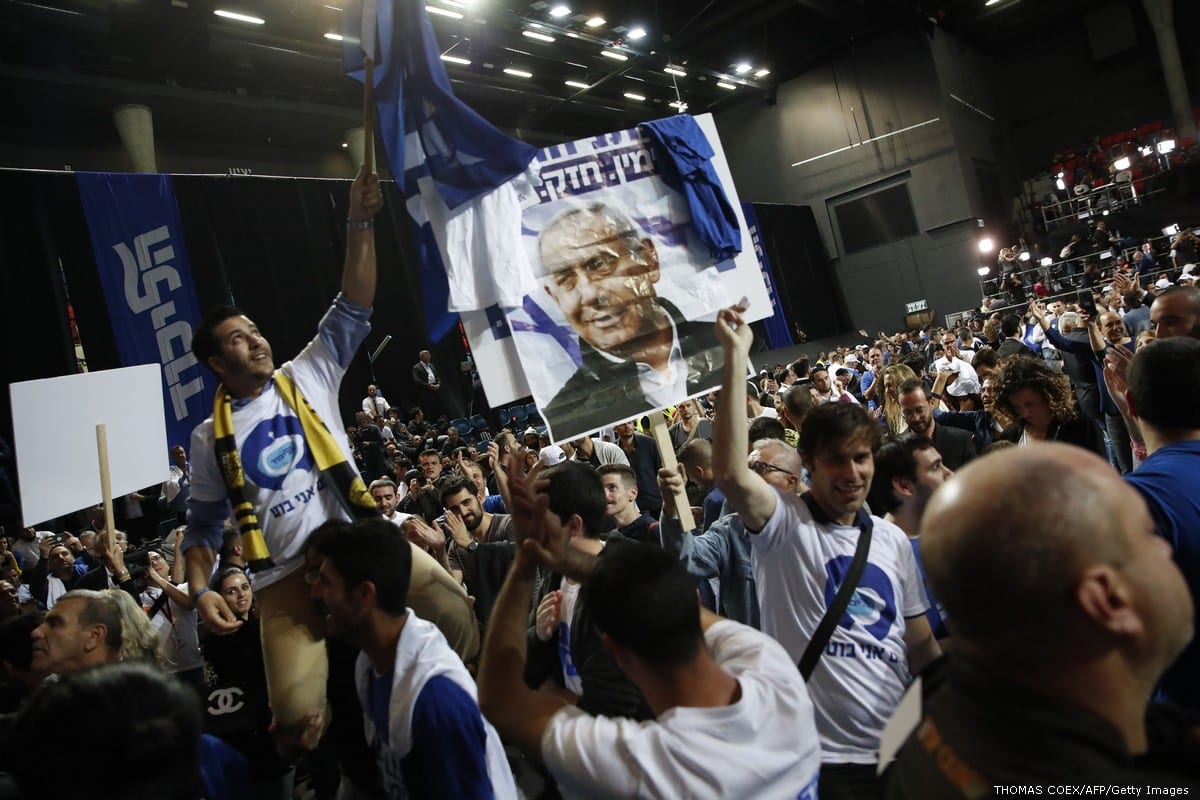 Supporters of Israeli Prime Minister Benjamin Netanyahu come together in Tel Aviv on election night on 9 April 2019 [THOMAS COEX/AFP/Getty Images]
May 31, 2019 at 12:23 pm

Israel's Prime Minister Benjamin Netanyahu will win more seats in September's upcoming election than he did in April, new polls have shown.

One poll â€“ conducted by Israeli newspaper Maariv â€“ showed that Netanyahu's Likud party would win 37 seats, two more than the 35 it won in April's general election. If Justice Minister Ayelet Shaked were to join the party, a deal which is reportedly in the making and widely expected to materialise, the Likud party could win as many as 41 seats.

This inflated Likud performance also relies on the centrist Kulanu party led by Finance Minister Moshe Kahlon, which earlier this week agreed to merge its four seats with Netanyahu's party. Though the pair have long been allies and Kulanu was expected to join the coalition before talks collapsed on Wednesday, Kahlon has been criticised for reneging on his promise that Kulanu would remain independent.

Meanwhile Netanyahu's main opposition, the Blue and White (Kahol Lavan) alliance, would win 33 seats, a two-seat decrease from the 35 it won on 9 April. A separate poll by Israel's Channel 13 also confirmed these numbers, suggesting that Netanyahu could yet again be tasked with forming the government after 17 September.

Perhaps most interestingly, former Defence Minister Avigdor Lieberman â€“ who Netanyahu is at pains to blame for blocking the formation of a government over his insistence on passing the Haredi draft law â€“ would increase Yisrael Beiteinu's seats from five to nine.

Onlookers had speculated that Lieberman could be punished at the ballot box for dragging Israel to elections for the second time in a year, but initial polls suggest otherwise. It is likely that his core support base â€“ Russian speaking, secular Jews, many of whom are relatively new immigrants to Israel â€“ will remain loyal and support his efforts to reduce the power of the ultra-Orthodox parties, Shas and United Torah Judaism (UTJ), in the Knesset.

READ: Trump says 'too bad' Israel will have to redo polls

If the polls prove accurate in September, Netanyahu could face the same difficulties in forming a coalition as he experienced in the past six weeks. Theoretically, if all right-wing factions â€“ namely Shas, UTJ, the Union of Right Wing Parties (URWP), Lieberman's Yisrael Beiteinu and the New Right (Hayemin Hehadash) party â€“ agree to join a Netanyahu-led government, the right-wing bloc would hold 72 seats (based on the more conservative estimate of 37 Likud seats). This would give them a strong majority in the 120-seat Knesset, where only 61 seats are needed for a governing coalition.

Even without Lieberman's nine seats, a Netanyahu-led coalition would hold 63 seats. Although this would be a precarious majority, it would prevent a recurrence of the past six weeks' deadlock, in which Lieberman held the exact number of seats needed to block the prime minister from forming a government.

However, should any one of the smaller parties drop below the 3.25 minimum threshold needed to gain seats in the Knesset, Netanyahu could find himself in hot water once again. The New Right party, for example, failed to cross the threshold in April, plunging Education Minister Naftali Bennett and his co-chair Shaked into political oblivion.

Bennett is still expected to head the New Right party, despite Shaked's moves to join Likud. In this, he could join with other fringe parties like the hard-line Zehut party and the highly controversial Otzma Yehudit party, an ideological descendent of the outlawed Kach party of Rabbi Meir Kahane.

Though these alliances could bring Bennett enough votes to squeeze the New Right over the minimum threshold, separating Otzma Yehudit from its current alliance with the URWP may, in turn, put its existence in jeopardy. With URWP predicted six seats, it will likely be unwilling to see valuable candidates prised away that could leave it short of the four usually needed to sit in the Knesset.

READ: 4 things to watch ahead of Israel's September election