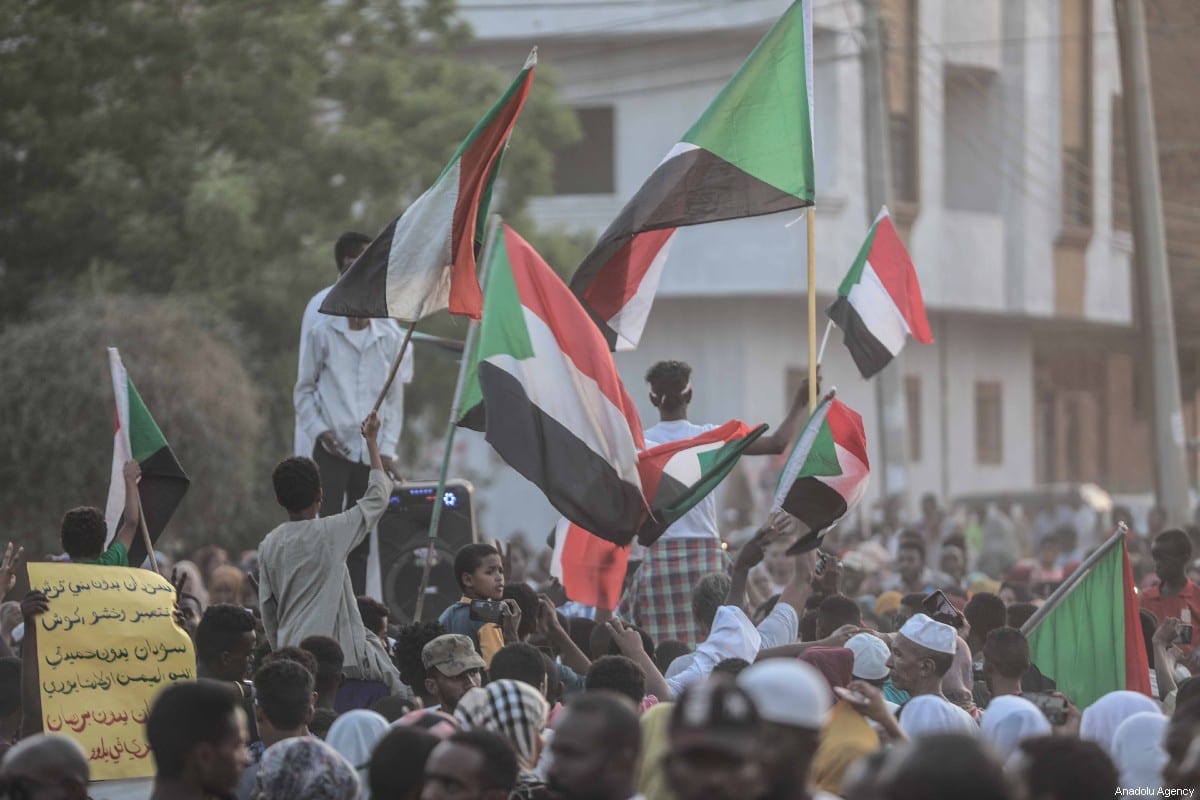 Sudanese people gather to celebrate the ongoing negotiations between Transitional Military Council and the Forces for Freedom and Change opposition alliance, in Khartoum, Sudan on 5 July 2019. [Mahmoud Hjaj - Anadolu Agency]
August 5, 2019 at 2:23 am

The Sudanese National Congress Party described the constitutional declaration document agreed upon by the Military Council and the forces of the Declaration of Freedom and Change as "bilateral and excludes all political and social components."

This came in a statement issued on Saturday night by the party that used to be led by the ousted President Omar Al-Bashir, and Anadolu Agency monitored.

"This bilateral agreement has excluded all the components of political and social life, which would complicate the future of the transitional period with political practices based on exclusion, isolation and inclusiveness," the statement said.

The statement continued: "The agreement has overridden the Constitution of 2005, which came with a consensus of all political parties without exception."

"Contrary constitutional requirement to adhere to Islamic Sharia reference in legislation, this agreement has been silent about this. It, therefore, makes room for broad secular trends." the statement added.

It also pointed out that the agreement has intentionally changed the ruling regime from a presidential system to a parliamentary system without any popular mandate through an elected parliament.

The party stressed that any document called constitutional fails to separate between the sovereign, legislative, executive and judicial authorities, which are the ABCs of political science and constitutional jurisprudence. It is a not worth seeing document, and its adoption during the extended transitional period is a failure.

The National Congress Party held "the Military Council, which seized power in the country, responsible for handing over power to an elected civilian government by the end of the transitional period."

The part stressed its unwillingness to participate at any level of governance in the transitional period for known considerations.

On Saturday morning, the African Union mediation in Sudan announced an "agreement between the Military Council and the Forces of Freedom and Change on all points of the constitutional declaration," hours after the start of a meeting in the capital Khartoum.

On 17 July, the Military Council and the Forces of Freedom and Change reached an agreement on the "Political Declaration." It allows for the formation of a council of sovereignty composed of 11 members, five of whom to be soldiers selected by the military council and five civilians are to be chosen by the Forces of Change, in addition to one civilian figure selected by consensus.

A military member would head the Council for 11 months, starting from the signing of the agreement, which then will be followed by the presidency of a civilian member for the remaining 18 months of the transitional period.