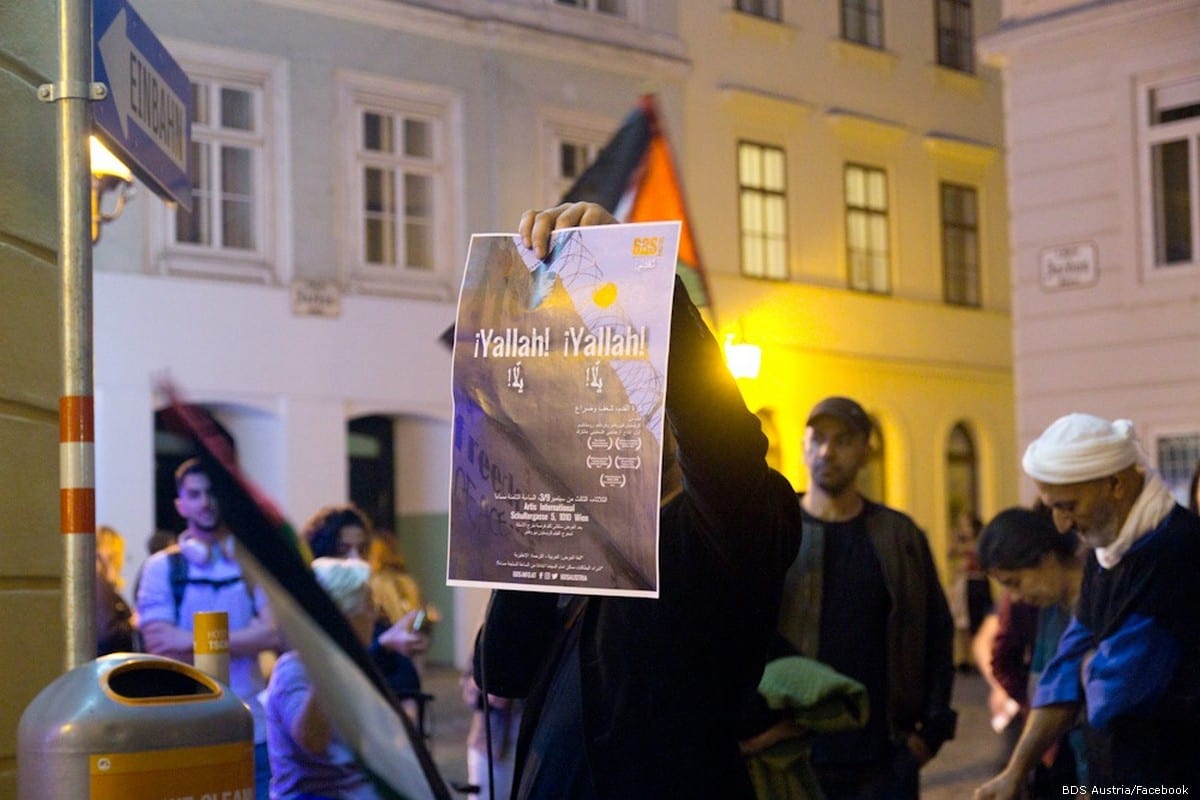 A protests following the cancellation of the premiere of the film ¡Yallah! ¡Yallah! in Vienna, Austria on 4 September 2019 [BDS Austria/Facebook]
September 6, 2019 at 2:16 pm

The Austrian branch of the Boycott, Divestment and Sanctions (BDS) movement has slammed the cancellation of a Palestinian film screening as an attack on free speech and an example of institutional racism.

The ARTIS Cinema in the Austrian capital Vienna had been slated to screen the premiere of "¡Yallah! ¡Yallah!", an Argentinian-Palestinian co-production by film director Cristian Pirovano, this week. Pirovano is currently touring Europe to promote the film, and was due to address the audience after the film screening.

However, at the last minute ARTIS Cinema announced that it would not screen the film, saying that "in recent days we increasingly received information and messages which pointed out the politically controversial statement not so much of the film as such, but of the movement supported by BDS."

"¡Yallah! ¡Yallah!" follows the lives of seven Palestinians and their passion for football under Israel's 52-year old occupation and continued forced displacement. It has won awards at numerous film festivals across Latin America and Europe, having been screened in over 100 cities.

In a lengthy Facebook post, BDS Austria accused ARTIS Cinema – which belongs to Cineplexx Ltd., the largest cinema operator in Austria – of "attempting to hide the pressure it has received from Zionist institutions" and argued that it was thus engaging in "censorship". 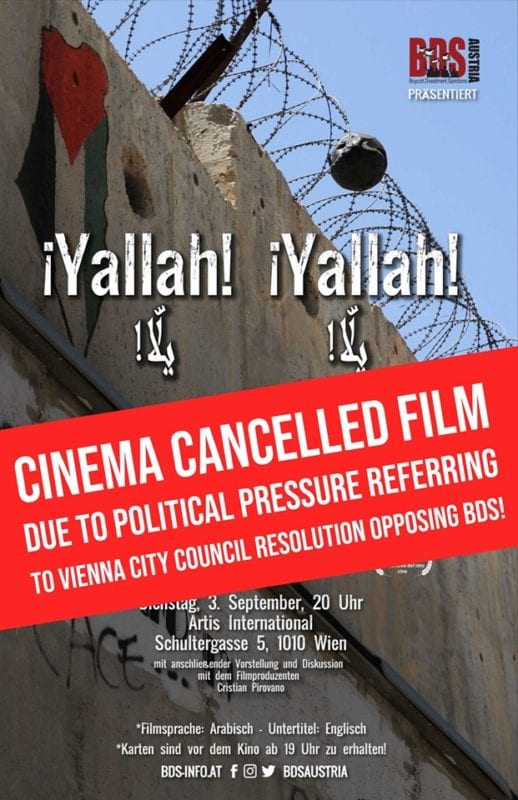 Activists on Wednesday protested against the decision outside ARTIS Cinema, waving Palestinian flags and donning keffiyehs, the traditional Palestinian headdress.

The cinema also cited a resolution adopted by the Vienna City Council in 2018, which called for "no cooperation with the antisemitic BDS movement" and sought to prevent public institutions and venues from hosting events affiliated with BDS.

"It is clear that ARTIS cinema's cancellation is a direct effect of the Vienna city council resolution, thus, determining an unreasonable and disproportionate restriction on freedoms of expression and peaceful assembly. This form of organized and institutional racism is unacceptable."

The city is attempting to dictate what can and cannot be discussed amongst civil society. This is intolerable.

BDS Vienna is not the first pro-Palestine movement to find that its events were threatened with cancellation under pressure from Israel lobby groups.

In July, it was revealed that UK Lawyers for Israel (UKLFI) – a pro-Israel legal group – had made several attempts to cancel the Palestine Expo, one of Europe's biggest Palestinian cultural fairs. UKLFI claimed that the organisers of the event – UK-based NGO Friends of Al-Aqsa – were "major promoters" of BDS, using this accusation as a pretext to demand that the event venue's German co-owners cancel the exhibition.

In its efforts, UKLFI cited a non-binding motion passed in May by the German parliament, which labelled BDS "anti-Semitic". The motion was widely condemned, with Israeli and Palestinian NGOs, Israeli academics and the director of the Jewish Museum in the German capital Berlin all criticising the decision.

Erdan has also praised the role played by the IHRA definition of anti-Semitism in his anti-BDS effort, boasting that as a result "courts in Spain and France have ruled anti-Israel boycotts illegal and convicted BDS activists". "There have been more than 50 lawsuits against BDS over the last several years, many of which have been successful," Erdan added.

READ: Comparing Israel to Nazis is 'anti-Semitic' in revised US definition