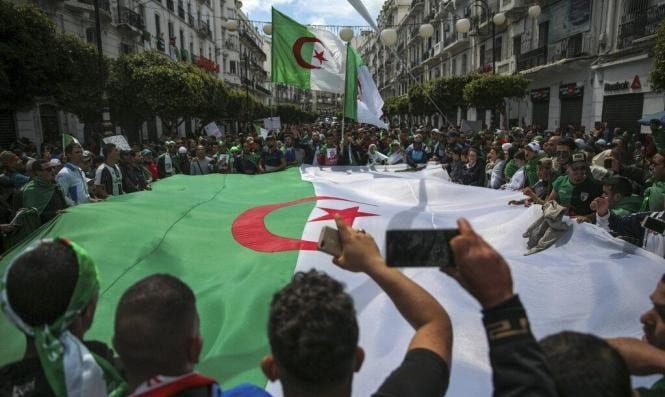 Algerian calls for France to "recognize, apologize and compensate" for its colonial crimes were renewed, with the 65th anniversary of the Algerian War of Independence  (1954-1962) beginning in November, in the light of a French official refusal to recognize attempts to erase the Algerian identity, looting, torture, murder and carrying out nuclear experiments during the years of occupation (1830-1962).

During every anniversary of the Algerian War of Independence, voices demanding the French to recognise colonial crimes renew their call. However, this year and with the ongoing popular movement in Algeria since 22 February, which forced Abdelaziz Bouteflika, to resign from the presidency (1999-2019), on 2 April, the situation was not the same.

Demonstrators demand, at every Friday march, to break with France at cultural and political levels, cancel the use of the French language in the state establishments, schools and universities, and even hold France responsible for the current political and economic situation in Algeria. 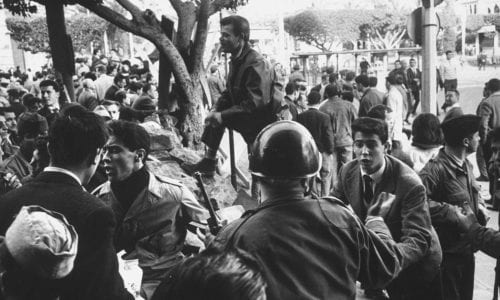 The most prominent colonial crimes committed by the French occupation in Algeria are as follow:

Since occupying Algeria, on 5 July 1830, France has worked to obliterate the different components of Algerian identity, launched a fierce campaign on mosques and Koranic schools, and built the first missionary school, in 1836. The French occupation also enacted apartheid laws, labelled the Algerians as the locals, Muslims or Arabs, and exploited them to serve the colonists, after usurping their land.

Across Algeria, the French colonial campaign was faced by popular resistance that did not succeed in achieving independence. France sent the skulls of the executed leaders of those revolutions to the Musée de l'Homme in Paris in 1880 and 1881. Since 2011, Algeria has demanded that France return these skulls, after identifying 31 among them. However, Paris still refuses to meet such demand.

Third: The Sétif and Guelma massacre

On 8 May 1945, hundreds of thousands of Algerians celebrated the end of World War II (1939-1945) and demanded that France fulfil its promise to grant them independence. However, the colonial forces used live ammunition, killing 45.000 unarmed demonstrators, in a crime against humanity.

The Algerian War of Independence broke out in 1954 and ended with independence from France in 1962. During that period, more than a million and a half Algerians were killed, and Algeria became known as the " one-million martyr country". In 2015, Algeria announced a comprehensive census of colonial crimes. France also used civilians as hostages and human shields in its fight against the Algerian National Liberation Army.

The Algerian League for the Defence of Human Rights revealed in a 2017 report that the number of victims of the French occupation exceeded ten million.

On 17 October 1961, some 60.000 Algerians marched in France to demonstrate against the French occupation of their country. The French authorities confronted the protesters with live ammunition and threw many of them into the Seine, with a total of 1500 dead and 800 missing, in addition to thousands of captives.

The French occupation authorities conducted a series of nuclear experiments under and above the Algerian desert between 1960 and 1966. During this period, 17 nuclear trials had been done, according to French officials, while Algerian historians said that the number of experiments is far more significant.

The Gerboise Bleue experiment was the first nuclear trial conducted in 1960 in the Reggane region, Bechar province, and southwest of Algeria. Colonial nuclear tests resulted in the death of 42.000 Algerians and caused permanent impairments due to atomic radiation that continues to pollute this location until today.

French colonialism practised the most heinous abuse and torture against Algerians, according to Algerian victims and historians. The occupiers electrocuted prisoners, used water wells as prisons, and threw detainees from helicopters.

The Algerian National Archives which contained millions of documents and artefacts, and was looted by the French occupier, is among other pending files between the two countries, as France still refuses to hand looted possessions over to Algeria, in addition to the file of 2200 missing Algerians during the revolution; a number deduced by the Algerian authorities.

The Anadolu Agency quoted the Algerian history professor Mohamed Lamine Belghith saying that "France will have to recognise the genocide committed against the Algerian population since 1830" and that "the occupier looted the treasury of the Algerian state. The amounts of robbed money and treasures, i.e. five French full-load ships in the first months of the occupation are recorded in the French official archives.

Read: 5 candidates to run in Algeria's presidential election next month