'US is entitled to defend itself' says UK, urges Iran to 'take diplomatic route' 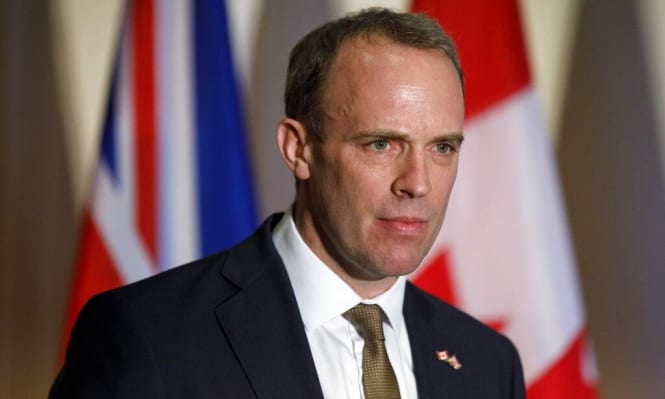 British Foreign Secretary Dominic Raab on Sunday urged Iran to "take a diplomatic route" to de-escalate rising tensions following the killing of Iranian general Qasem Suleimani by a US strike.

Speaking on the BBC, Raab said US President Donald Trump and his French counterpart Emmanuel Macron "left the door open to a diplomatic route through this, to a better place for Iran", but that Tehran decided "not to take it".

He stressed the need to "de-escalate the tensions and try and restore some stability" as well as to contain Iran's "nefarious actions".

"Iran has for a long period been engaged in menacing, de-stabilising activities," he added.

Raab on Sunday spoke separately to Sky News, saying the UK was "on the same page" with the US in relation to Friday's killing of Suleimani.

"Let's be very clear: he was a regional menace, and we understand the position that the Americans found themselves in, and they have a right to exercise self-defence," Raab said. "They have explained the basis on which that was done, and we are sympathetic to the situation they found themselves in," he added.

Meanwhile, the Foreign and Commonwealth Office (FCO) updated the travel advice to Iraq for British citizens.

"The first job of any government is to keep British people safe," Raab said an a statement.

He added that given "heightened tensions" in the region, the FCO advised UK nationals not to travel to Iraq, with the exception of the Kurdish regional government, and to "consider carefully whether it's essential to travel to Iran". "We will keep this under review," Raab said.

Two British warships are on their way to the Persian Gulf to "protect" ships and citizens, Secretary of Defence Ben Wallace announced Saturday.

"Under international law the United States is entitled to defend itself against those posing an imminent threat to their citizens," Wallace said.

The UK Royal Navy escorted British-flagged vessels through the Straight of Hormuz in July 2019, following Iran's seizure a British-flagged ship. The seizure came in retaliation of the seizure of an Iranian-flagged tanker near Gibraltar, a British territory.

The Pentagon accused Soleimani of plotting the embassy attack and planning to carry out additional attacks on US diplomats and service members in Iraq and the region.

Qassem Soleimani was the head of Iran's elite Quds Force and the mastermind of its regional security strategy. He was killed early Friday near the Baghdad international airport along with senior Iraqi militants in an airstrike ordered by President Donald Trump. The attack has caused regional tensions to soar and tested the US alliance with Iraq. Fearing escalation, NATO has suspended it's training activities in Iraq.

Showing no signs of seeking to reduce tensions, the US president has since issued a stern threat to Iran on Twitter, saying that the US has targeted 52 Iranian sites that it would strike if Iran attacks Americans or US assets in response to the US drone strike that killed Soleimani. He later added that the US will use 'new' equipment to strike Iran.