Listing companies to boycott over Israeli war crimes is a start… 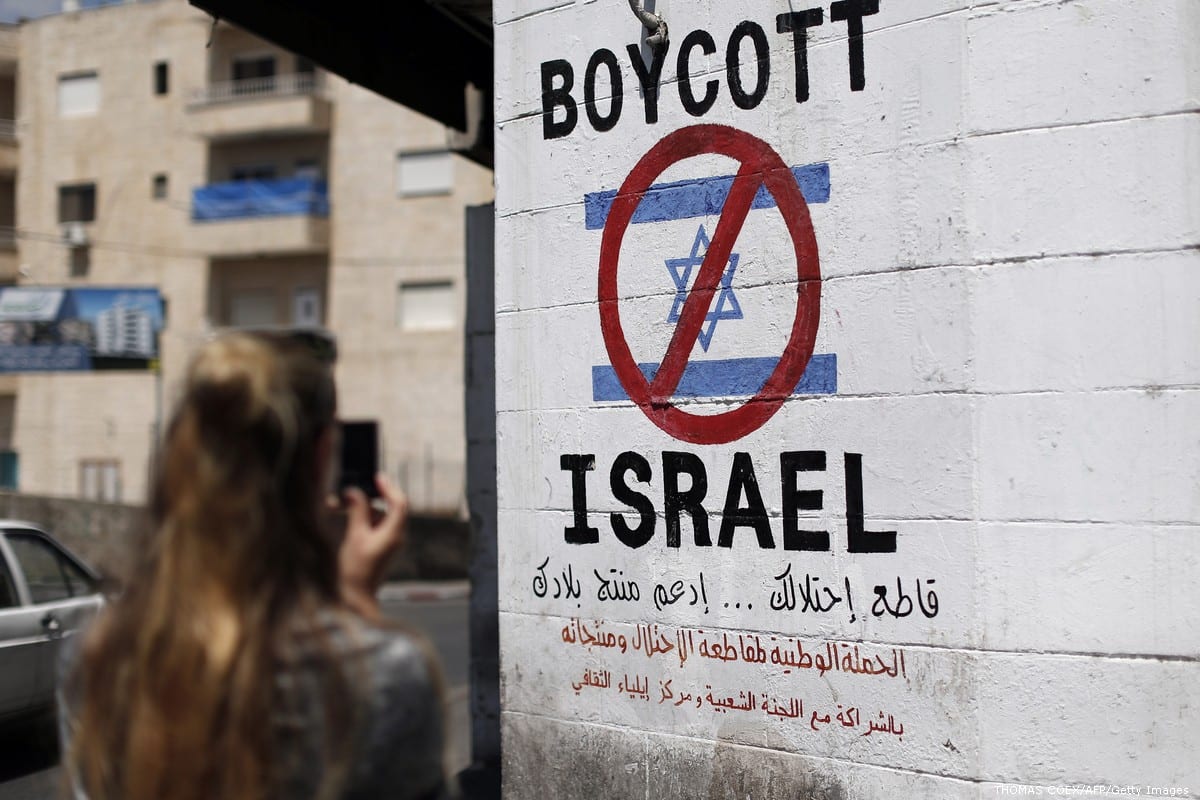 A tourist photographs a sign painted on a wall in the West Bank town of Bethlehem on 5 June 2015, calling to boycott products coming from Israeli settlements [THOMAS COEX/AFP/Getty Images]

The UN finally published its database this month listing companies which profit from Israel's brutal military occupation of the West Bank. This move was only made after years of unexplained delays. Rather helpfully, though, the Zionist Federation – an anti-Palestine, pro-Israel lobby group in Britain — admitted that, "The United States and Israel worked for over three years to stop its publication." This confirms that such a list is likely to hurt Israel's economy if suitable action follows its publication.

The Israeli response to the list has thus been predictable. Minister of Strategic Affairs Gilad Erdan reacted by smearing the UN as being guilty of "anti-Semitism". Prime Minister Benjamin Netanyahu threatened to retaliate against the UN, saying that, "Whoever boycotts us will be boycotted." He announced that he had already withdrawn Israel from the UN body behind the list, the Human Rights Council.

At exactly the same time that Israel's propagandists in the West want to bamboozle us, by claiming that it is anti-Semitic to even use the term "Israel lobby", Netanyahu boasted that in recent years he and Trump had "promoted laws in most US states, which determine that strong action is to be taken against whoever tries to boycott Israel."

The Israel lobby wants to gaslight us into believing that it is both powerful and influential while simultaneously not existing. This really is cloud cuckoo land, a bizarre state of affairs that has not only been adopted by right-wing governments like those led by Netanyahu and Trump, but also by Britain's supposedly left of centre Labour Party, which is in the grip of the same mass delusion.

Papers sent to me from Labour's disciplinary bodies earlier this month threatened me with further sanction and punishment should I continue my reporting on Israel and its lobby in Britain. Of course, as always, the facts were not contested by the party. Instead, I was attacked for reporting accurately the fact that the Israel lobby exists, and that it has been at the forefront of the smear campaign against Jeremy Corbyn since 2015. I resigned in protest at this blatant censorship by the dead hand of Labour's oppressive, right-wing bureaucracy.

Despite all the Israeli bluster about the evil UN supposedly boycotting the state, the database in question is actually quite timid — far too mild, I believe — and does not even call for a boycott of the companies listed. Furthermore, it appears to take a quite narrow view of what constitutes complicity with the Israeli occupation.

For example, the list excludes some longstanding strategic targets of the Palestinian boycott, divestment and sanctions – BDS – movement, including Volvo, Caterpillar, G4S and HP. Nevertheless, it does include many Israeli firms and some well-known international brands, including Airbnb, Booking.com and TripAdvisor, as well as construction equipment maker JCB, estate agent Re/Max and electronics firm Motorola. 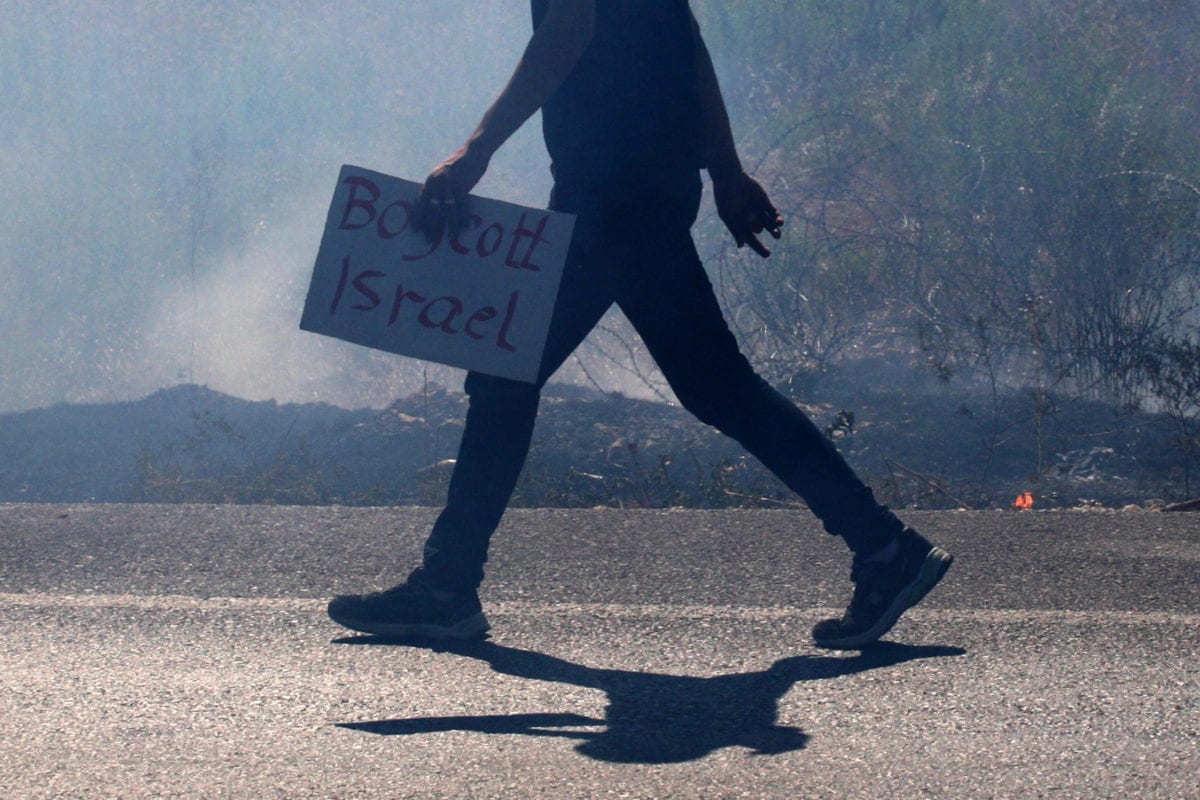 A Palestinian protester hold a placard reads "Boycott Israel" during a demonstration against the Israeli military action in Gaza, near the West Bank town of Nablus, on 16 July 2014. [Nedal Eshtayah|Apaimages]

The BDS National Committee in Palestine welcomed the UN database as "a very significant first concrete step by any UN entity towards holding to account Israeli and international corporations that enable and profit from Israel's illegal settlements, which constitute a war crime."

At last, the UN released a database of companies complicit in Israel's illegal settlement enterprise, despite bullying by Trump and Israel's far-right government.

These companies must be held to account, including through strategic boycotts and divestment campaigns. pic.twitter.com/G6DhnfYKLk

The committee noted that the database was incomplete. The UN itself is expected to update the list annually. Crucially, companies can be removed from it if they divest from settlements; from their direct involvement in Israeli war crimes. This factor alone makes these companies good targets for strategic, achievable boycott campaigns.

The BDS movement is proving once again that it is the main strategy of the international solidarity movement with Palestinians that can have the single biggest effect over the long term.

The UN has released its list of companies operating in illegal Israeli settlements, and 3 UK companies – @JCBmachines, @opodo and Greenkote PLC – have been named.

Tell these companies to end their complicity in Israel's war crimes!

This new UN database, although not explicitly part of the BDS movement, can be a useful tool for BDS activists in Britain and around the world.

Another useful new database is explicitly part of the BDS movement; the one produced recently by the Palestine Solidarity Campaign looking at British universities and their investments in companies involved in the occupation of the West Bank. As part of its impressively detailed research into the universities' financial affairs, the PSC found a staggering £450 million worth of investments in, and institutional ties with, companies complicit in Israel's arms trade and illegal settlement economy. The group cross-checked its research with the new UN database and found that a significant number of British universities are implicated.

The PSC announced this week that it has written to 10 British universities, including the University of Manchester, University College London and the London School of Economics, urging them "to immediately end these investments and financial ties, and to take urgent steps to end all investments in companies complicit in Israel's apartheid regime."

Student activist should step in to compel their institutions to listen, and then take action by divesting from Israeli apartheid. Listing companies to boycott over Israeli war crimes is a start, but getting them to divest has to be the next step.