Despite a declared truce from Saudi Arabia, battles intensify on multiple fronts in Yemen 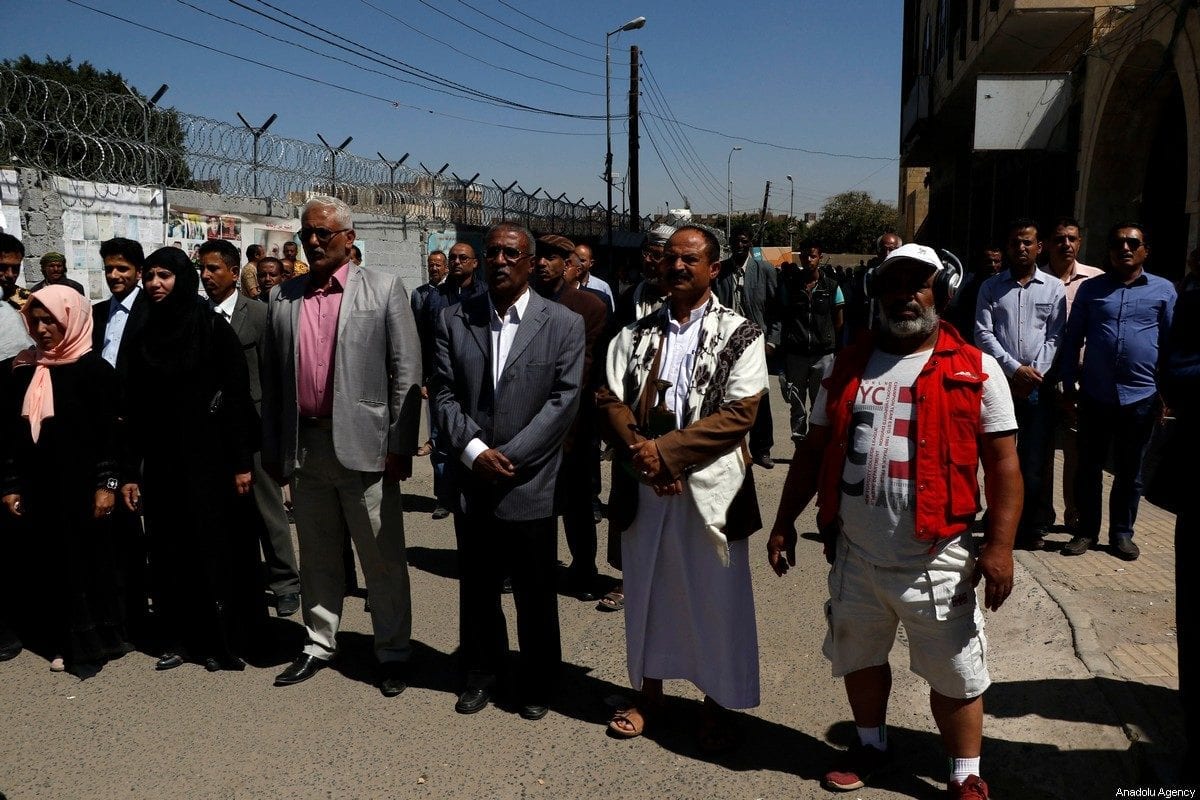 People gather in front of United Nation's office in Sanaa to stage a protest against airstrike carried out by war planes of coalition forces led by Saudi Arabia over Al Jawf, in Sanaa, Yemen on 19 February 2020 [Mohammed Hamoud / Anadolu Agency]
April 16, 2020 at 1:00 am

Despite Saudi Arabia's declaration of a comprehensive truce in Yemen, the battles have intensified and the fronts have expanded, while Saudi official statements continue discussing Riyadh's commitment to the truce. Meanwhile, Saudi Arabia and the Ansar Allah Movement have been exchanging accusations about which side is violating the truce, as the Ansar Allah Movement has repeatedly announced this week that Saudi Arabia had not suspended the fighting, but it rather intensified the attacks.

Saudi military reinforcements arrived yesterday in the eastern governorate of Mahra on the Saudi-Omani border, indicating the intensification of battles. This, however, might be only on the external level, as sources suggest that these Saudi military moves are an attempt to pressure for better negotiations. Even the firings on the fronts of the Sirwah District, the Qaniyah and Al-Zahir regions in Al-Bayda, the western Taiz fronts, and in Almalaheeth in the Saada Governorate, near the Yemeni-Saudi border, may not indicate a Saudi determination to continue the war.

All indications suggest that Saudi Arabia is going to end the war, for several reasons, perhaps the most important of which is the US' desire to pacify burning fronts while it is busy facing the threat of the coronavirus pandemic and the approaching of the US presidential elections at the end of the year. This comes in addition to Saudi Arabia being affected by low oil prices and the war depleting its financial capabilities, as well as facing the threat of the coronavirus spread in the kingdom.

Houthi prisoner exchange with Saudi: The difference between 'seriousness' and posturing

Sources have indicated there may be indirect negotiations between the two sides in Muscat with the help of international parties, despite the apparent escalation. The negotiations aim at this time to reach a ceasefire agreement that could pave the way for political negotiations.

According to official data, it is certain that the Ansar Allah Movement is not satisfied with only a ceasefire without measures to lift the siege on Yemen, given that the truce and the initiative of the UN Special Envoy for Yemen Martin Griffiths came on a humanitarian backdrop due to the coronavirus pandemic. The movement believes that facing this danger requires lifting the siege so that the Yemenis can counter this pandemic and the effects of the devastating war over the past years.

The United Nations announced yesterday that it had received positive indications from the Yemeni government and the Houthi group about an initiative put forward by Griffiths, to end the war, without disclosing the nature of which side it came from.

Griffiths announced last Friday that the proposals he sent to the parties of the conflict include: "The urgent resumption of the political process, economic and humanitarian measures to alleviate the suffering of the Yemenis, building confidence between the parties, and supporting the ability to confront the coronavirus."

The Saudi-led Arab Coalition has previously announced a comprehensive ceasefire in Yemen that started last Thursday and would last for two weeks, with the possibility of renewing it.

Well-informed sources confirm Saudi Arabia's seriousness in ending the war, but Riyadh appears to be avoiding paying its costs.

In another context, Saba News Agency, quoting a Yemeni security source, mentioned that the security services would publish details about the activity of a sabotage cell that had established a media centre affiliated with the aggression countries and operating from inside the capital of Sanaa. According to Saba News Agency, the source explained that the documents and talks between the cell elements belong to the Islah party, which is involved in treachery and promoting news and crimes of the so-called Azal Resistance cells.

The source also indicated that those documents, talks and other details will be distributed to various media outlets, and confirmed that the judicial rulings issued against the members of this cell, which were announced a few days ago, came in accordance with the provisions of legal articles of the criminal law and the criminal penalties for these activities.

The source called on all his country's people to cooperate in reporting any suspicious movements and work to spread awareness to immunise society from the dangers of the activities of those cells, which support the aggression countries. The source further stressed on the necessity of spreading legal awareness of the dangers of spreading rumours and public-disturbing news and the approved penalties for that.