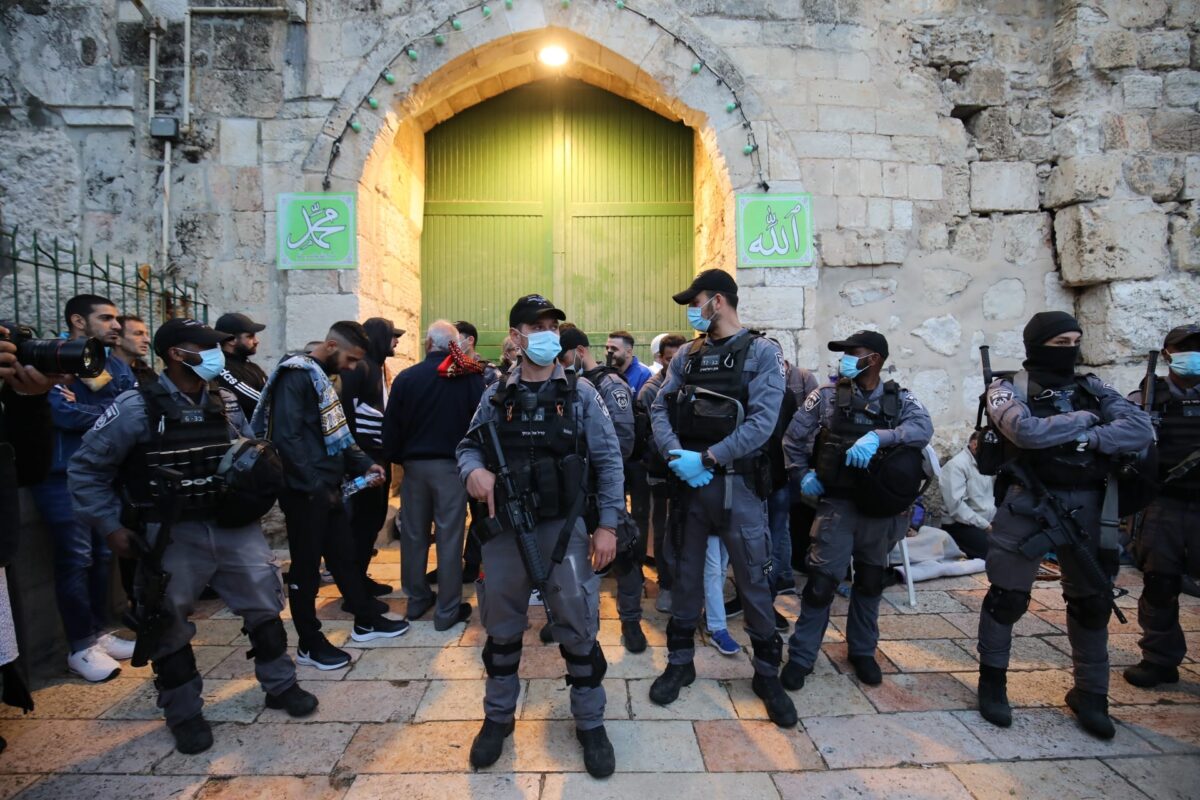 Israeli police stand guard in front of doors as Palestinian Muslims gather to perform Eid al-Fitr prayer at Al-Aqsa Mosque, which is closed as a precaution against the novel coronavirus (COVID-19) pandemic in Jerusalem on May 24, 2020. [Mostafa Alkharouf - Anadolu Agency]
May 30, 2020 at 2:00 pm

Dr Hanna Eisa, secretary-general of the Christian-Islamic Commission to Support Jerusalem and the Holy Sites, called on Friday for the United Nations (UN) to urgently stop Israel's expropriation of Palestinian lands in occupied Jerusalem.

In a press release reported by Al-Quds Al-Araby, Eisa called on the UN to prevent Israel from carrying out geographic and demographic changes in the occupied city of Jerusalem, or to carry out any other measure that might undermine the outputs of the final status negotiations.

Eisa stated that Israel adopts the policy of imposing a de facto reality which is rejected by the international community and was denounced by several international resolutions and conventions, including the Fourth Geneva Convention and the founding regulations of the International Criminal Court (ICC) ratified in 1998.

He noted that Israel is carrying out "illegal" actions such as the Judaisation of Jerusalem and building settlements. "Keeping the situation unchanged is a continuous violation of the Palestinian rights protected by the international conventions," he asserted.

In his press release, Eisa reiterated that the Israeli military occupation of Jerusalem does not give it sovereignty over the occupied city, pointing out that international law gives limited authorities to the occupation power that enables it to run the occupied areas.

"This means that all the administrative and legislative measures carried out by the Israeli occupation authorities in the occupied Jerusalem to change the reality are invalid," according to Eisa.

Eisa also noted that there are tens of international resolutions which were issued by the UN Security Council that call on Israel to respect Jerusalem, as these decisions reiterate that the holy city is part and parcel of the Palestinian lands occupied in 1967.

The city of Jerusalem has been subjected to a fierce settlement campaign which includes demolition of Palestinian homes and displacing their residents, in order to build Israeli Jewish settlements and replace the Palestinians with Israeli settlers.