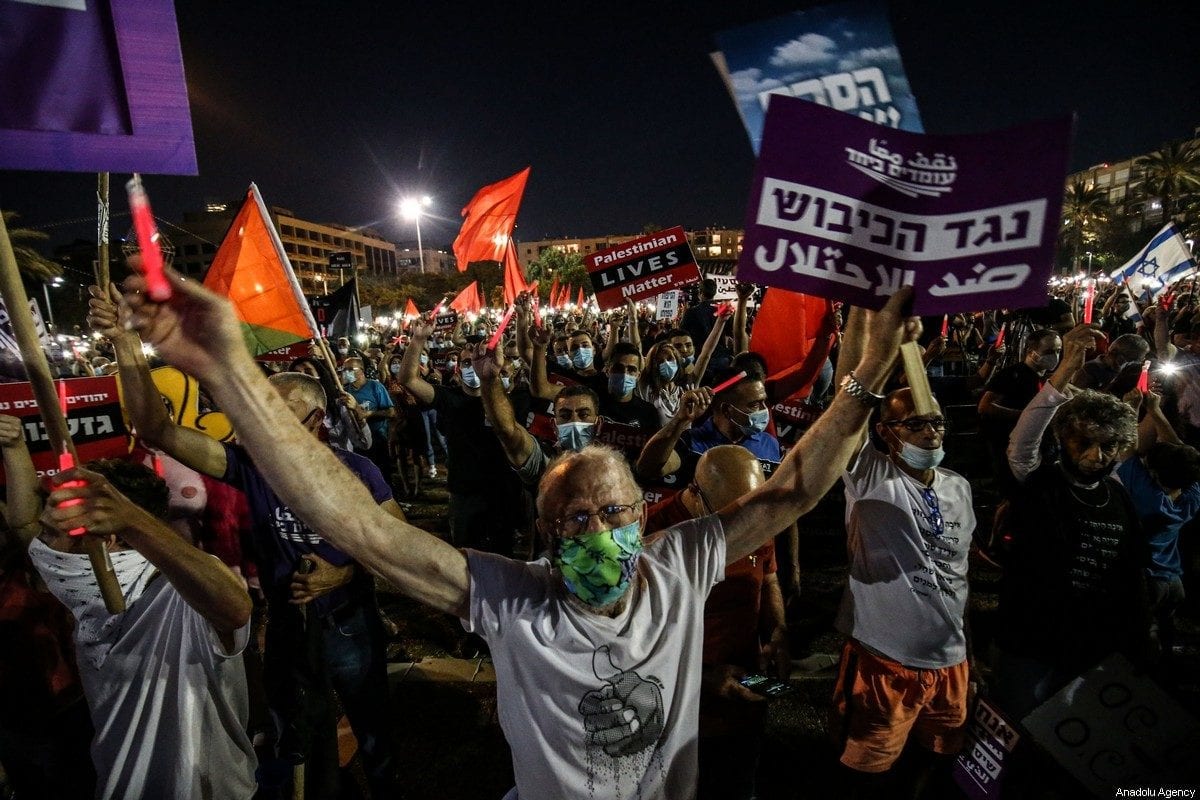 Demonstration to protest against Israel's annexation plan for the illegal settlements in West Bank and Jordan Valley, in Tel Aviv on 6 June 2020 [Mostafa Alkharouf / Anadolu Agency]
July 13, 2020 at 3:13 pm

Palestinian resistance factions in the West Bank have called for a renewed popular uprising against the illegal Israeli occupation amid continued "colonial settlement and ethnic cleansing activities" reports the Palestinian Information Centre (PIC).

In a press release issued on Saturday in Ramallah, national and political parties voiced their rejection of any proposals which legitimise the on-going occupation, including plans for further annexation of Palestinian land.

They stressed that the only acceptable solution by the Palestinians, is to end the occupation outright, including enabling Palestinians the right to return to their homes, self-determination and the realisation of an independent, sovereign state with Jerusalem as its capital.

Palestinians were urged to participate in marches and protest rallies aimed at confronting Israel's annexation plans, including one scheduled tomorrow at the Ahmed Al-Shukeiri Rotary in Al-Bireh city.

Plans to annex illegal Israeli settlements in the West Bank and the Jordan Valley have been endorsed by the controversial Middle East peace plan, dubbed as the "deal of the century" by US President Donald Trump and refers to Jerusalem as Israel's "undivided capital". Many foreign ministries, including those of France, Germany, along with Egypt and Jordan warned last week against the provocative proposal.

Lebanon's Hezbollah and the Palestinian Hamas movement have also said Israel's ambition to annex the West Bank is "aggression against the Palestinian people" and have called for unity to confront it. Head of Hamas' political bureau, Ismail Haniyeh sent a letter to Hezbollah's Secretary-General Sayyid Hassan Nasrallah in which he said that the Palestinian cause is facing "grave dangers".

A statement by Hezbollah meanwhile stated: "The Palestinian people are capable of confronting this plan." It called on Arab and Muslim nations and "free people of the world to quickly move to stop the occupation's continuous aggression against the Palestinian people."

READ: The next Palestinian Intifada will involve more support from Iran