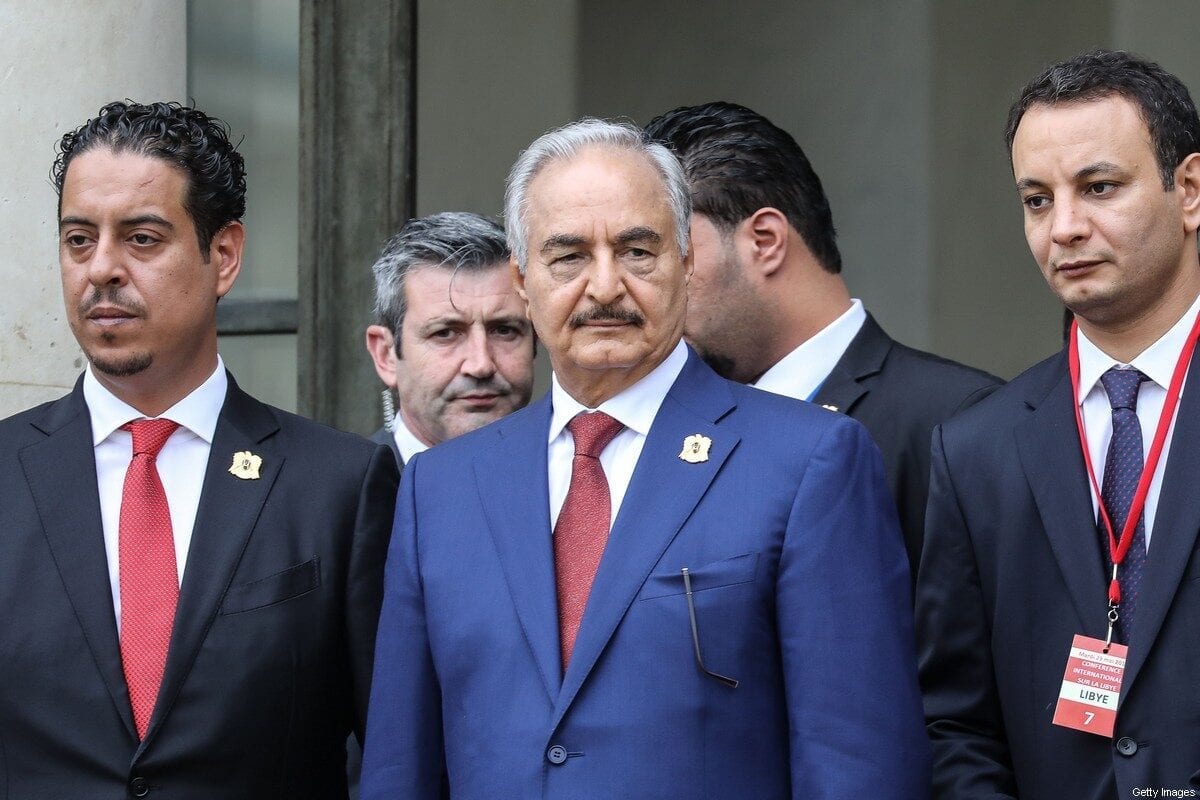 Libya Chief of Staff, Marshall Khalifa Haftar, whose rival Libyan National Army dominates the country's east, stands at the steps of the Elysee Palace with his delegation as they leave following the International conference on Libya in Paris on May 29, 2018. [LUDOVIC MARIN/AFP via Getty Images]
August 18, 2020 at 3:31 pm

A former senior British diplomat is revealed to have been involved in a plan to improve the image of Libyan warlord Khalifa Haftar after it was proven that he committed war crimes in his quest to dominate the country.

Jolyon Welsh, who was previously the deputy director for the Middle East and North Africa at the UK Foreign Office, was working at the public relations company Consulum at the time when he was assigned the task of improving Haftar's image.

According to the London-based news organisation Middle East Eye (MEE), Consulum said that it started to come up with a draft communications strategy for the warlord after being approached by his unnamed intermediary in May last year.

The plan, which MEE saw in the form of a document by the firm, was reportedly aiming to show Haftar in the position of a credible and legitimate leader of Libya in order to bolster his campaign to rule the North African country.

The project plans were allegedly abandoned, however, after Welsh examined whether Haftar was a suitable client in a "due diligence" exercise. It came as the United Nations warned of his potential war crimes during his offensive against Tripoli and its civilians, as well as the International Criminal Court's arrest warrants for one of his senior commanders, Mahmoud Al-Werfalli.

Those reports culminated in the discovery in June this year that Haftar's forces had committed numerous war crimes and human rights violations, with mass graves of civilians having been discovered in areas liberated by the Libyan government after it defeated Haftar's offensive.

After Consulum's lawyers first denied MEE's findings and threatened to sue for libel, it finally acknowledged its role in a series of letters that the document the outlet acquired was merely a "first draft" which, if developed after "many stages," would have influenced British public opinion, politics, and media to view Haftar as the future leader of Libya.

The firm reportedly aimed to attain "broad support across the Western political establishment" for the rouge Field Marshall by showing him as "the only credible solution to Libya's civil war" and one who would be a "pro-Western bulwark against terrorism" while serving as Libya's "transitional leader".

Some of the methods that the draft suggested the firm use in that goal were to professionally train his spokespeople, produce pro-Haftar content on sites such as Google and Wikipedia, and to write several opinion pieces which it would then place in Western media.

The company insisted, however, that these plans were drawn up by a junior employee and never found its way out of its offices.

Improving Haftar's image was not the only project Consulum was involved in, but the firm has participated in a series of controversial projects such as generating positive media coverage for Saudi Arabia despite human rights violations such as its murder of the exiled Saudi journalist Jamal Khashoggi in October 2018.

Another project it has worked on was public relations work for the authorities in Hong Kong, following China's imposition of its new security law and the brutal crackdown of protestors there.

A key concern that the revelation has raised is whether the involvement of Welsh, as a former diplomat, indicated the involvement of the British government as well. Consulum was firm in its guarantee that that was not the case, though, with a spokesman stating that he "has been a full-time employee of Consulum since 2014. His employment was entirely transparent and in full accordance with all relevant FCO rules and procedures and remains so."

Despite its confirmation that Welsh joined the company in 2014, however, it declined to say when he left the Foreign Office, with the official narrative being that he was on unpaid leave at the time.