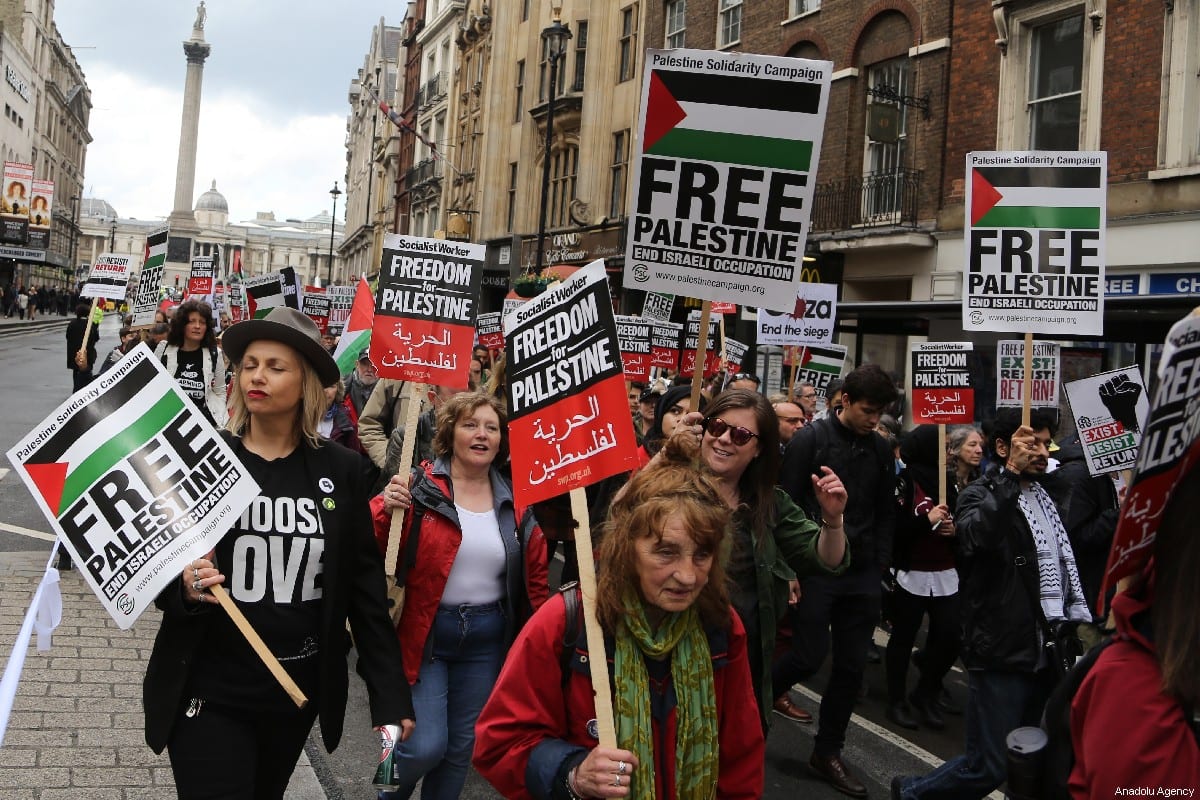 Thousands attend a protest organised by the Stop the War Coalition and Palestine Solidarity Campaign in support of the Palestinian people, to mark the 71st anniversary of the Palestinian Nakba, on May 11, 2019 in London, England [Tayfun Salcı / Anadolu Agency]
August 25, 2020 at 1:33 pm

Over 35 protests took place across Britain at the weekend to mark the sixth anniversary of Israel's 2014 military offensive against Palestinian civilians in the Gaza Strip. The 50 day onslaught — "Operation Protective Edge" — killed 2,251 people, 500 of whom were children, and wounded more than 11,000.

The protests were coordinated by the Palestine Solidarity Campaign, Campaign Against the Arms Trade (CAAT) and War on Want. They called for the British government to place a two-way arms embargo on Israel and an end to Britain's complicity in Israel's war crimes and violations of human rights. Britain has licensed £376 million ($496m) worth of arms to Israel since 2015.

"Israel's 2014 massacre of Palestinians in Gaza brought worldwide condemnation," explained the chair of the PSC, Kamel Hawwash. "Yet, the British government continues to licence weapons to be exported to Israel. It is a national shame. The shocking two-way arms trade must end."

Activists also drew attention to the complicity of financial institutions, such as HSBC, which provide loans and financial services to companies that sell arms to Israel, such as Raytheon and BAE Systems. Moreover, recent research by the Palestine Solidarity Campaign has revealed that British universities and local authority pension funds have a raft of investments in companies arming Israel.

The protests coincided with a renewed Israeli onslaught on Gaza which remains under a crippling land, air and sea blockade. The two million Palestinians living in the besieged territory face an uphill struggle to rebuild their lives. The cost of the destruction of Gaza's homes and infrastructure by Israel in 2014 alone was estimated at $7.8 billion.

Government statistics collated by CAAT show that, since 2015, Britain has been involved with Israel in buying and selling aircraft, helicopters, drones, grenades, bombs, missiles, armoured vehicles and tanks. As well as the fixed licences for such arms, there are also 31 open licences for Israel, mainly for aircraft equipment. Such licences allow for an unlimited number of exports, so the real statistics are likely to be significantly higher in terms of value and numbers.

"By arming and supporting Israeli forces," said Caroline Jones of CAAT, "the UK government is making itself complicit in the atrocities that are being inflicted on Palestinian people. UK arms sales do not just provide military support, they also signal political support for the illegal occupation of Palestine, including the proposed immoral and illegal annexation of yet more Palestinian land, which will only inflame tensions and lead to further bloodshed. British governments must stop putting arms sales ahead of the rights and lives of Palestinians."

Business continues as usual despite Israel being condemned widely for its indiscriminate use of force against Palestinian civilians in Gaza. In 2018, for example, demonstrators began the weekly Great March of Return protests calling for their fundamental human rights and were met with deadly force by Israeli troops. More than 280 Palestinian protesters have since been killed by snipers during the protests.

Most of the Palestinians living in the Gaza Strip are refugees from other parts of occupied Palestine. They or their families were driven out by armed Zionist militias when almost 750,000 people were ethnically cleansed in the run up to the creation of the state of Israel on Palestinian land in 1948. Hundreds of thousands more Palestinians were driven out in 1967.