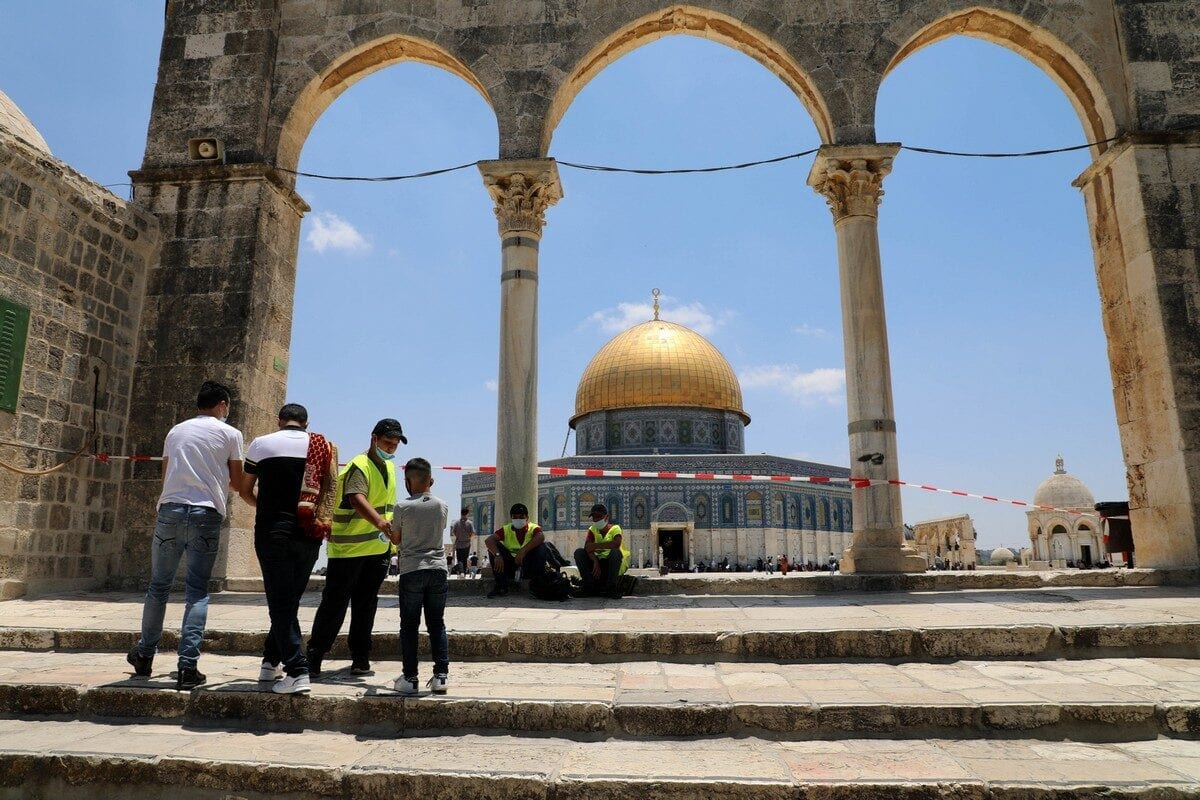 We have lived to see Arabs enter Al-Aqsa Mosque under Israeli protection. It is shameful.

Is there any real difference between an Arab delegation visiting Al-Aqsa Mosque under Israeli protection and hordes of extremist Israeli settlers whose incursions and practice of Talmudic rituals there take place under the protection of the same security forces? The crime of these Arabs is arguably greater.

The storming by Israeli extremists under the guns of the Israeli occupation does not whitewash the image of the occupation in the eyes of the world, nor does it give it legitimate sovereignty over the Noble Sanctuary of Al-Aqsa. The Arabs' visit does, however, whitewash the image of the military occupation and is "evidence" that all Muslims can go to Al-Aqsa Mosque. It also shows the world the false image of Israel providing protection for religious sites and allowing religious freedom.

A delegation from normalising Arab countries entered Al-Aqsa last week under the protection of the Israeli police and intelligence agencies, despite the occupation authorities' closure of the mosque to Palestinian residents of Jerusalem. More dangerous than that, the normalisation delegation entered Al-Aqsa without informing the Religious Endowment Department there, and this ignored the authority of the Hashemite Kingdom of Jordan over the holy sites in Jerusalem. According to Jerusalemite activist and member of the Silwan Defence Committee, Fakhry Abu Diab, this also withdraws any recognition by these Arab countries of Jordan's guardianship; instead, these states demonstrated their acceptance of Israeli sovereignty over the holy sites, especially Al-Aqsa.

This exploratory delegation was a faithful implementation of the deal of the century, which speaks with admiration of the Zionist occupation's management of the Noble Sanctuary. This is a deliberate and blatant falsehood belied by the facts on the ground. "The State of Israel has been a good custodian of Jerusalem," claims the Trump deal. "During Israel's stewardship, it has kept Jerusalem open and secure." This is a lie.

OPINION: This is what the Palestinians need to do to confront Arab normalisation

"Unlike many previous powers that had ruled Jerusalem, and had destroyed the holy sites of other faiths, the State of Israel is to be commended for safeguarding the religious sites of all and maintaining a religious status quo," the text continues. "Given this commendable record for more than half a century, as well as the extreme sensitivity regarding some of Jerusalem's holy sites, we believe that this practice should remain and that all of Jerusalem's holy sites should be subject to the same governance regimes that exist today. In particular, the status quo at the Temple Mount/Haram Al-Sharif should continue uninterrupted."

Unfortunately, the normalising delegation was loyal to its masters by implementing this deal, which was rejected by all the Arab and Muslim peoples who were able to express their opinion freely. It is a deal that buries the right of the Muslims to the third holiest site in Islam, after the Two Holy Mosques in Makkah and Madinah, and hands it over to the Israeli occupation on a silver platter. Sadly, it also demonstrated the urgently-issued religious and political opinions urging Muslims to visit Al-Aqsa Mosque with permission from Israeli embassies.

Continuing this naivety and even foolishness, even more Arab delegations are likely to enter Al-Aqsa in collaboration with the Israeli occupation forces and intelligence agencies. They will provide implicit recognition of the occupation's sovereignty over Al-Aqsa Mosque giving Israel the right to determine who enters the mosque and who is turned away. Everyone already knows the serious restrictions imposed by the Israelis on Jerusalemites and other Palestinians regarding prayers at Al-Aqsa.

The new situation places a great responsibility on Jordan, which is the guardian of the holy sites, and its diplomats must act quickly in those Arab countries and explain the threats to the Noble Sanctuary that these delegations pose. If Jordan does not get a response in this regard, then it must tell the Arab and Muslim people explicitly, beginning with the Jordanians and Palestinians, of the dangerous situation that threatens its sovereignty over the sanctities. This is not to absolve itself of responsibility, but to stand together against the danger that is being hatched against Islamic sanctities in Jerusalem in the name of the odious deal of the century.