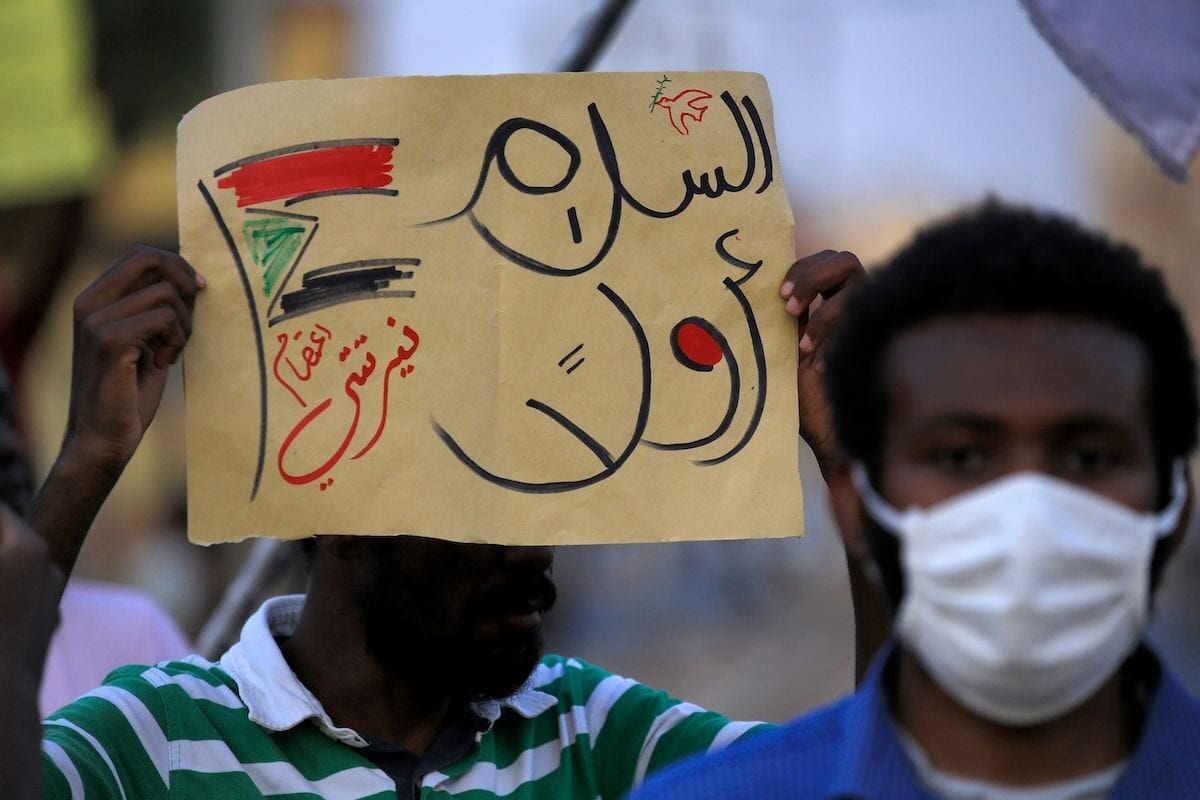 A demonstrator holds up a sign reading in Arabic "peace first, Nertiti sit-in" along with a drawn Sudanese flag, during a protest outside the Sudanese Professionals Association in the Garden City district of Sudan's capital Khartoum on 4 July 2020 [ASHRAF SHAZLY/AFP via Getty Images] 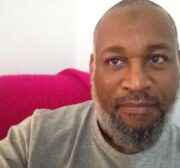 Despite the latest peace agreement signed earlier this month, journeying through Darfur in the heart of a 17-year armed conflict area is an arduous task. There are still major concerns about safety and security.

For the people of Darfur, especially those in the camps filled with internally displaced people and formerly administered by a plethora of international NGOs spread around the cities of Niyala and Geneina, the conditions are as bad as they have ever been. There are growing complaints about the lack of potable water, adequate medicine, healthcare services, education and jobs.

Peace is just another word with no real meaning. Nothing has changed on the ground. A new generation is growing up in the camps with no viable future despite, in some cases, having graduated from universities with distinction. One of the camps around Niyala is called Odash; it covers a vast area and is divided into 14 different zones. It was there that I met 50-year-old Fatima Mango, who lost both parents, uncles, aunts and her brother when mounted militiamen — the Janjaweed — rode into her village and slaughtered them in 2003. "I want real peace today before tomorrow," she said. "I want to go back to my home. I want justice and peace on the ground."

Also feeling the effects of the fighting is 25-year-old Ameer, an English graduate who has lived in the camp most of his life. With no job and very few, if any, future prospects, he has set up a committee to raise awareness and campaign for the rights of the young. "I keep telling others like me not to go abroad to fight in Libya or try to go to Europe," he explained. "We have to fight for our rights right here in Sudan, but no one is listening to me."

READ: The trial against Bashir for 1989 coup d'état is against Sudan law

The official agreement signed in Juba on 3 October between Sudan's transitional government and several rebel groups negotiating under the banner of the Sudan Revolutionary Forces was missing some key players. Two major factions were not party to the deal. The Sudan Liberation Movement under Abdel Wahid Abdul-Nur, and the Sudan People's Liberation Movement under Abdul-Hulu refused to sign, although the latter has made a separate agreement to maintain a ceasefire conditional upon Sudan being declared a secular state. Al-Hilu says that he will fight for self-determination if his demand is not granted.

Some $750 million per year for the next 10 years will be allocated to Darfur and other conflict areas in the country. Economic and land rights have been promised to relocate or rehabilitate those evicted forcefully from their homes. However, many believe that the agreement does not go far enough as it does not give the automatic right for displaced persons to return to their homes, nor disarm the former militias until they are integrated into the national security and armed forces. The instability means that thousands of Sudanese are still willing to risk their lives to fight as mercenaries across the border in Libya or attempt the perilous journey to Europe as economic migrants.

At the centre of the continued unrest are the Rapid Support Forces who struggle to protect Sudan's borders. The international community associates them with the banditry of the Janjaweed that fuelled the Darfur conflict, but they insist that this is an unjust view, even though the RSF grew out of the militia. One commander told me that the job is made all the more difficult by the absence of technology such as drones and satellite equipment to patrol the border. This, he said, forces them to use traditional methods to prevent human trafficking and the recruitment of Sudanese mercenaries. 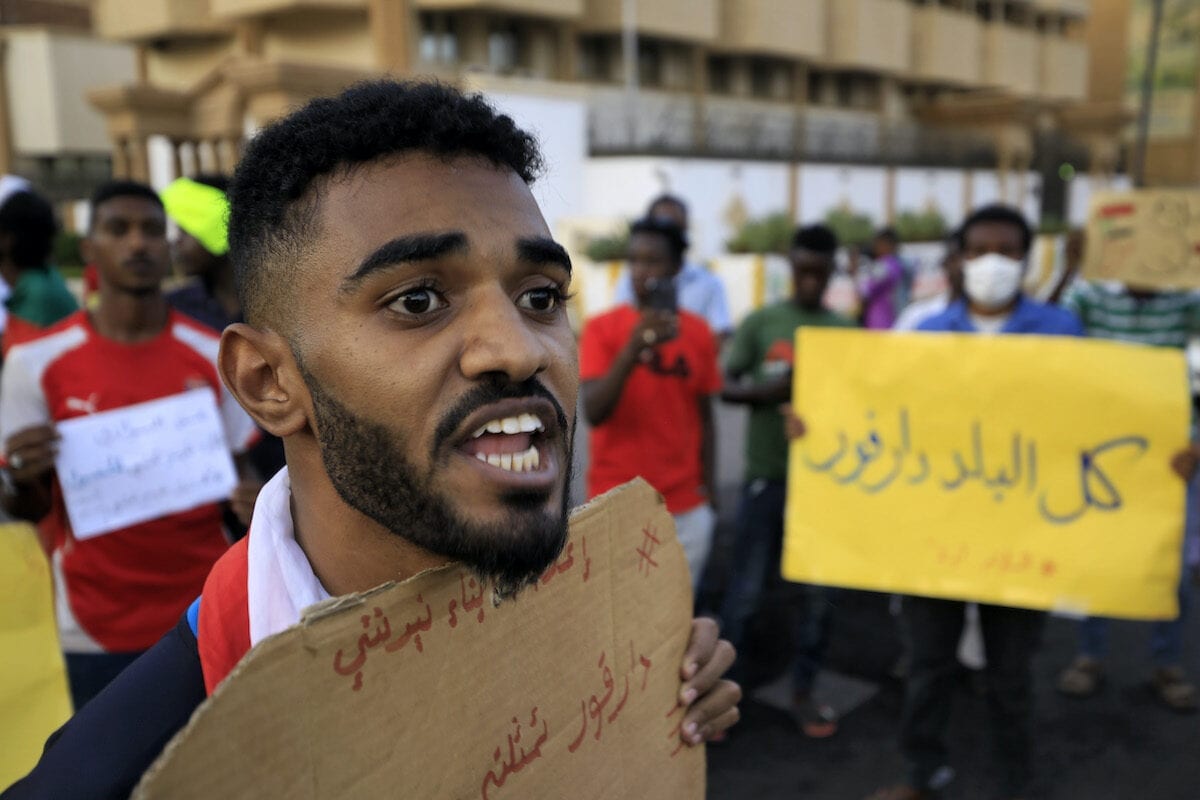 A demonstrator chants slogans during a protest outside the Sudanese Professionals Association in the Garden City district of Sudan's capital Khartoum on 4 July 2020, in solidarity with the people of the Nertiti region of Central Darfur province in the country's southwest. [ASHRAF SHAZLY/AFP via Getty Images]

At one of Darfur's regional administrative offices, officers privately expressed disappointment at the transitional government in Khartoum. One jokingly asked me to find the Qur'anic verse which prohibits making friends and protectors with enemies: "Burhan's transitional government are with the enemies," he laughed, a reference to the news that Sudan looks to be on the way to normalising relations with the Zionist state of Israel.

However, he was more serious about claiming responsibility for the ouster of President Omar Al-Bashir through the December 2018 Revolution. "We [the RSF] removed Al-Bashir and our leader Mohammed Hamdan has the support of the Sudanese public."

He described the RSF as the "guardians of peace". It would be fair to contest his claim given the volatility of Sudan's Darfur region. It is also fair to suggest that strong intervention is essential to neutralise the threat to the stability of Sudan as a nation.

Last month in Geneina, a disagreement over a seemingly frivolous matter resulted in the death of almost 40 people. Such incidents are not uncommon. The region continues to be awash with weapons, as if Sudan has a Second Amendment to the Constitution guaranteeing citizens the right to bear arms. No such amendment exists.

Moreover, not everyone is happy about the peace. The instability in Darfur means that young men with no future are risking their lives to travel abroad and are willing to pay hundreds of thousands of dollars in the process. Someone is making a lot of money from their despair.

The fact remains that a culture and mindset of peace has yet to materialise in some parts of Sudan. Meanwhile, a culture of revenge and retribution seems to dominate the social landscape. Darfur in particular, and Sudan in general, therefore, remain caught uneasily between war and peace. There is still a long way to go until all of the weapons will be laid down.

READ: Sudan stumbles into the future with no expectation of real change