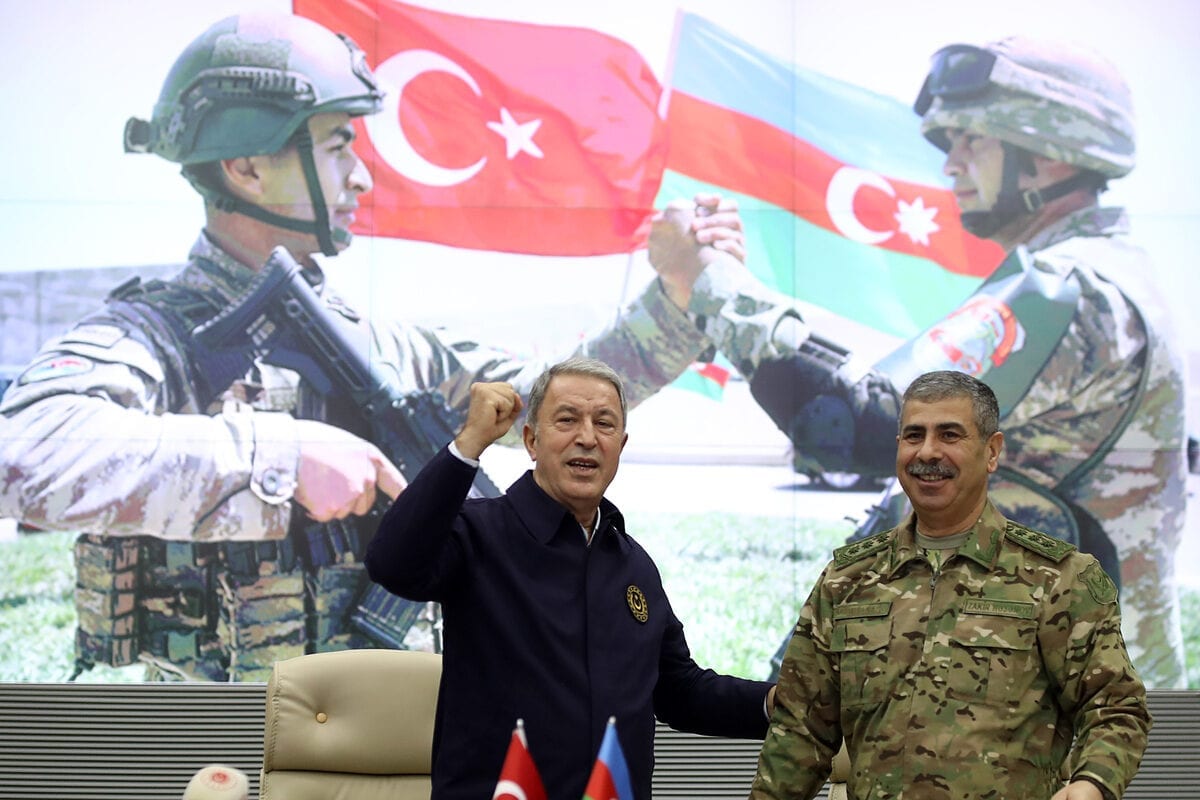 Russian President Vladimir Putin declared on Tuesday that Azerbaijan and Armenia had signed a peace agreement, ending six weeks of fierce fighting between the two countries over Nagorno-Karabakh. The mountainous region is internationally-recognised as part of Azerbaijan but has been occupied and run by ethnic Armenians since 1994.

The agreement stipulates that Azerbaijan will hold on to areas of Nagorno-Karabakh that it liberated during the war and Armenia is to withdraw from several other areas over the next few weeks. Russia, meanwhile, will deploy 1,960 peacekeepers to guard the Lachin Corridor, which links the Karabakh capital, Stepanakert, to Armenia. Azerbaijan will also gain a road link to Nakhchivan, an Azeri enclave on the border with Turkey.

"I have signed a statement with the presidents of Russia and Azerbaijan on the termination of the Karabakh war," said Armenian Prime Minister Nikol Pashinyan. He described the signing of the agreement as "unspeakably painful" for him and for the Armenian people. "I have taken this decision as a result of an in-depth analysis of the military situation."

The Armenian leader in Nagorno-Karabakh, Arayik Harutyunyan, said that the ceasefire had been "unavoidable" after the loss of Shusha, the second largest town in Karabakh.

READ: Turkey to monitor ceasefire in Karabakh along with Russia, Erdogan says

In a televised speech, Azerbaijan's President Ilham Aliyev said that, "An iron hand forced him [Pashinyan] to sign this document… This is essentially a capitulation."

Turkey was Azerbaijan's main supporter in this war, but it was probably absent from the final negotiations of the peace agreement. However, it looks like it achieved its own victory. According to Aliyev, the deal followed a phone call between Putin and Turkish President Recep Tayyip Erdogan on Sunday.

"We will continue to stand with Azerbaijan," explained Turkish Foreign Minister Mevlüt Çavuşoğlu. "This is a great success and victory for Azerbaijan."

Erdogan's Spokesman İbrahim Kalın tweeted: "Karabakh is now free. Karabakh is Azerbaijan. Turkey will remain by Azerbaijan's side both in the field and on the table." Defence Minister Hulusi Akar added, "We congratulate our Azerbaijani brothers and sisters who have fought to reclaim their own lands that have been occupied for nearly 30 years, and to end Armenia's barbarous attacks." 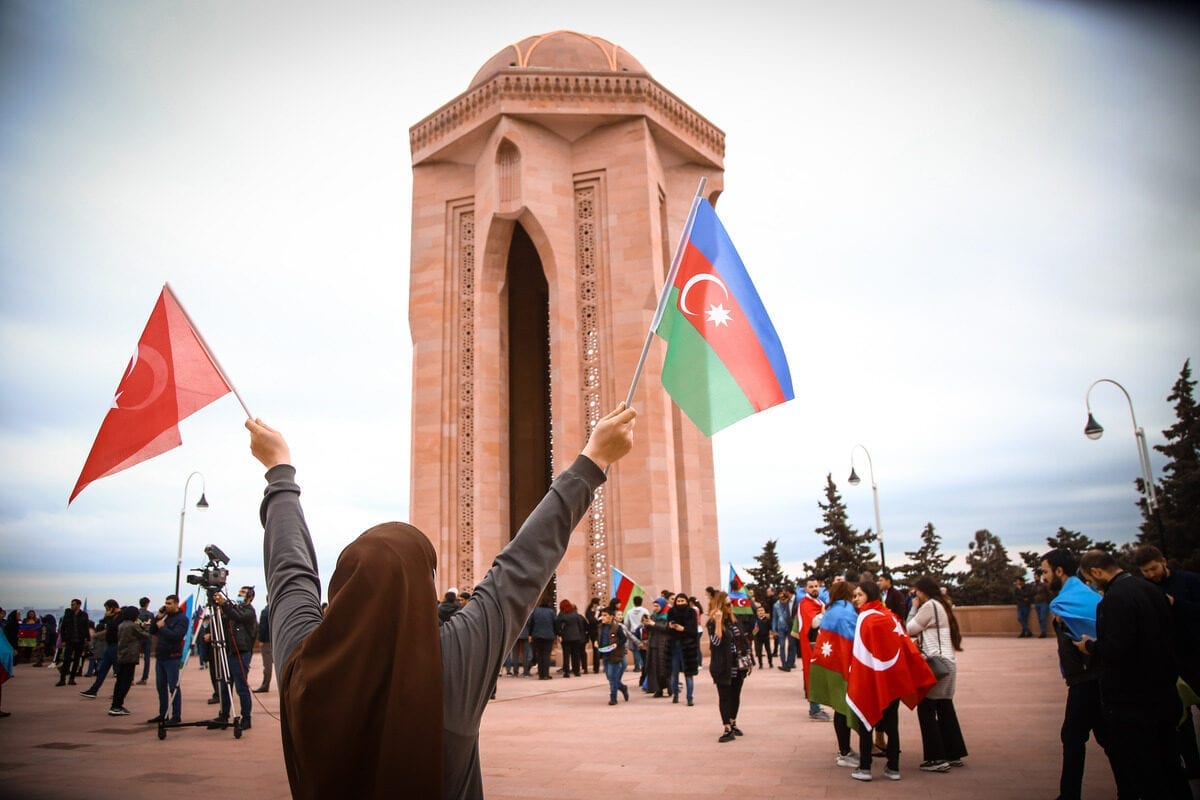 Azerbaijani people visit Alley of Martyrs, a cemetery and memorial dedicated to those killed by Soviet troops during the 1990 Black January, as they gather to celebrate the deal reached to halt fighting over the Nagorno-Karabakh region as the defeat of Armenia, in Baku, Azerbaijan on 10 November 2020. [Resul Rehimov – Anadolu Agency]

The peace deal was also welcomed by Kemal Kılıçdaroğlu, the chairman of the main Turkish opposition Republican People's Party (CHP): "I welcome with pride the truce agreement, which legitimises Azerbaijan's rightful fight against the occupation of its lands, and congratulate Azerbaijan's victory cordially."

Contacts in Turkey told me that the victory celebrations there were no less impressive than those in Azerbaijan. Why did Turkey stand with Azerbaijan and why are the Turks so jubilant?

First and foremost, the victory means that Turkey will have a direct land route across Azerbaijan and thus regains its historical contiguity with all the Turkic nations of Azerbaijan, Kazakhstan, Kyrgyzstan, Tajikistan, Turkmenistan and Uzbekistan. "Many countries did their best to undermine the achievement of this geostrategic goal," Rasul Tosun, a senior official of the ruling Justice and Development Party, told Al Jazeera Arabic.

Turkish Journalist Hamza Tekin told me that Turkey is now part of a very large region dominated by ethnic Turks from the Aegean Sea to China. "All the nations between these two points are Turkic," he pointed out. "This has economic, political and strategic benefits for Turkey, the strongest of the region's countries."

Tekin noted that Turkey offered Azerbaijan "military, intelligence, information and media support" in its fight against the Armenian occupation. "This was a Turkish victory from the perspective of its politics, interests, goals and strategic vision."

Sources in the Turkish presidency were reported by Al Jazeera as saying that Turkey is also interested in the land link with Afghanistan and Pakistan without having to pass through Iran.

According to a report in the Telegraph in Britain, it seems that Turkey has already influenced the states in the region. "Ankara has also pushed Central Asian governments, with their Turkic and Islamic connections, to support Azerbaijan," wrote James Kilner this week.

The French daily L'Opinion, reported Anadolu, believes that this is a Turkish victory against France, which backed Armenia. Moreover, said L'Opinion, Russian military equipment proved to be weak in the face of Turkish defence technology. "Azerbaijani superiority over Armenia became clear in the opening days of the armed clashes. The efficiency of Russian equipment against Turkish technology stayed rather limited."

"This is a message to everyone that Turkey stands beside its allies until they achieve their goals," added Tekin. "The world should understand that it is not easy to push Turkey to give up its rights whether in the Mediterranean or anywhere else."