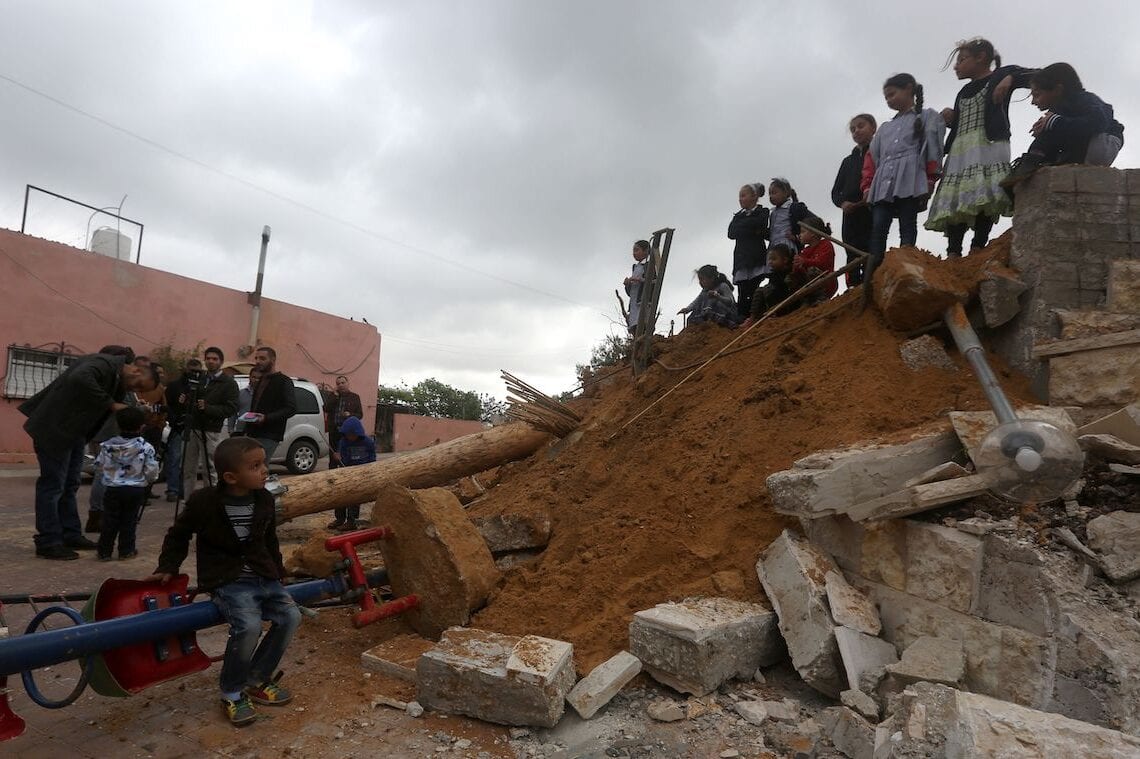 Palestinian children check the destruction in a children's playground, that was built with funding from Belgium, in the Zatarah village, south of the West Bank city of Nablus, after it was demolished on 12 April 2016 by Israeli authorities who said it was built in the so-called Area C, a closed military zone where Israel exercises full control. [JAAFAR ASHTIYEH/AFP via Getty Images]

Belgium is furious. On November 6, the Belgian government condemned Israel's destruction of Belgian-funded homes in the Occupied Palestinian West Bank. Understandably, Brussels wants the Israeli government to pay compensation for the unwarranted destruction. The Israeli response was swift: a resounding 'no'.

The diplomatic row is likely to fizzle out soon; neither will Israel cease its illegal demolitions of Palestinian homes and structures in the West Bank nor will Belgium, or any other EU country, receive a dime from Tel Aviv.

Welcome to the bizarre world of European foreign policy in Palestine and Israel.

The EU still champions a two-state solution and advocates international law regarding the legality of the Israeli military occupation of the Palestinian territories. To make that possible, the EU has, for nearly four decades, funded Palestinian infrastructure as part of a state-building scheme. It is common knowledge that Israel rejects international law, the two-state solution and any kind of outside 'pressure' regarding its military occupation.

To back its position with action, Israel has been actively and systematically destroying EU-funded projects in Palestine. In doing so, it aims to send a message to the Europeans that their role in supporting the Palestinian quest for statehood is vehemently rejected. Indeed, in 2019 alone, 204 Palestinian structures were demolished just in Occupied East Jerusalem, according to the Euro-Med Monitor. Included in this destruction – in addition to similar demolition in the West Bank Area C – are 127 structures that were funded mostly by EU member states.

Yet, despite the fact that Israel has been on a crash course with the EU for years, Europe remains Israel's number one trade partner. Worse, Europe is one of Israel's largest weapons suppliers and also main market for Israel's own weapons – often touted for being 'combat-proven', as in successfully used against Palestinians.

The contradiction does not end here.

In November 2019, the European Court of Justice ruled that EU countries must identify on their labels the specific products that are made in illegal Jewish settlements, a decision that was seen as an important first step to hold Israel accountable for its occupation. Yet, bizarrely, European activists who promote the boycott of Israeli products are often tried and indicted in European courts, based on the flimsy claim that such boycotts fall into the category of 'anti-Semitism'. France, Germany and others have repeatedly utilized their judicial system to criminalize the legitimate boycott of the Israeli occupation.

And here, again, European contradictions and confused policies are evident with total clarity. Indeed, last September, Germany, France, Belgium and other EU members spoke firmly at the United Nations against Israel's policy of demolition, which largely targeted EU-funded infrastructure. In their statement, the EU countries noted that "the period from March to August 2020 saw the highest average destruction rate in four years."

Because of the absence of any meaningful European action on the Palestinian front, Israel no longer finds the European position, however rhetorically strong, worrisome. Just consider the defensible Belgian position on the destruction of Palestinian homes that were funded by the Belgian government in the village of Al-Rakeez, near Hebron (Al-Khalil).

"This essential infrastructure was built with Belgian funding, as part of humanitarian aid implemented by the West Bank Protection Consortium. Our country asks Israel for compensation or restitution for these destructions," the Belgian Foreign Ministry said in a statement on November 6.

Now, marvel at the Israeli response, as communicated in a statement issued by Israel's foreign ministry. "Donor states should utilize their tax payer's (sic) money towards the funding of legal constructions and projects in territories that are controlled by Israel, and make sure those are planned and executed in accordance with the law and in coordination with the relevant Israeli authorities."

But are Europeans violating any law by helping the Palestinians build schools, hospitals and homes in the Occupied Territories? And what 'law' is Israel following when it is systematically destroying hundreds of EU-funded Palestinian infrastructures?

Needless to say, the EU support for Palestinians is consistent with international law that recognizes the responsibility of all UN member states in helping an occupied nation achieve its independence. It is, rather, Israel that stands in violation of numerous UN resolutions, which have repeatedly demanded an immediate halt to Israel's illegal settlement activities, home demolition and military occupation altogether.

READ: Israeli settlement expansion sees the UN shy away from its duty, as usual

Israel, however, has never been held accountable for its obligations under international law. So, when the Israeli foreign ministry speaks of 'law', it refers only to the unwarranted decisions made by the Israeli government and Knesset (parliament), such as the decision to illegally annex nearly a third of the West Bank, a massive swathe of Palestinian land that is located in Area C – this is where most of the destruction is taking place.

Israel considers that, by funding Palestinian projects in Area C, the EU is deliberately attempting to thwart Israel's annexation plans in this region. The Israeli message to Europe is very clear: cease and desist, or the demolition will go on. Israeli arrogance has reached the point that, according to Euro-Med Monitor, in September 2014, Israel destroyed a Belgian-funded electrification project in the village of Khirbet Al Tawil, even though the project was, in fact, installed in coordination with Israel's civil administration in the area.

Alas, despite the occasional protest, EU members are getting the message. The total number of internationally-funded projects in Area C for 2019 has shrunk to 12, several folds lower than previous years. Projects for 2020 are likely to be even lower.

The EU may continue to condemn and protest the Israeli destruction. However, angry statements and demands for compensation will fall on deaf Israeli ears if not backed by action.

The EU has much leverage over Israel. Not only is it refusing to leverage its high trade numbers and military hardware, but it is also punishing European civil society organizations for daring to challenge Israel.

The problem, then, is not typical Israeli obstinacy alone but Europe's own foreign policy miscalculation – if not an all-out failure – as well.