Hamas and Al-Sisi: A new page? 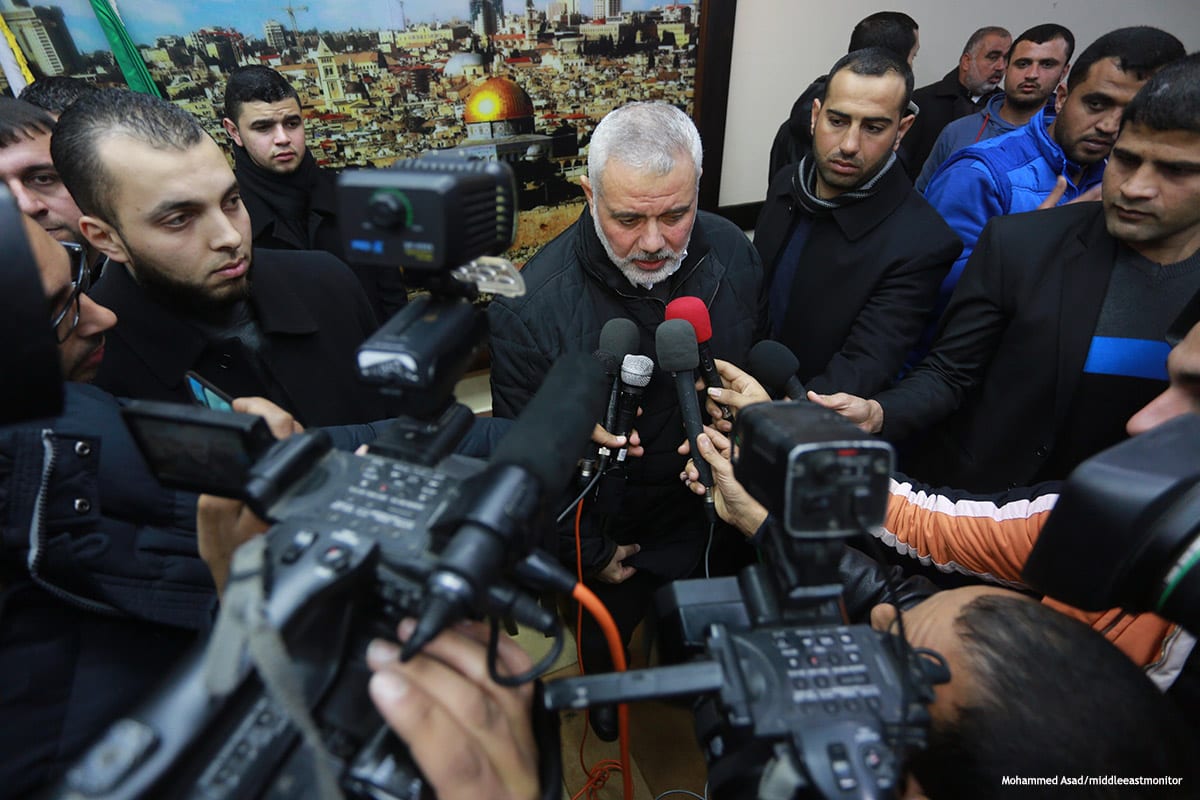 Spokespersons for the Palestinian Islamic Resistance Movement — Hamas — have given the impression that their movement's relationship with Egypt is on the verge of dramatic shifts that will put an end to the tense relations between the two since the coup that deposed President Mohamed Morsi in 2013. Hamas has indicated that the recent visit to Cairo by the Deputy Head of the movement's political bureau, Ismail Haniyeh, has paved the way to turning a new page in these relations. Hamas officials have attributed this "radical" change to a "strategic" shift in the position of Abdel Fattah Al-Sisi's government towards the movement. They believe that this shift will manifest itself in the improvement of the economic and living conditions in the Gaza Strip.

However, what the Hamas officials are promising contradicts with the voices in Cairo, as media mouthpieces linked to Al-Sisi's government have attributed the rapprochement between Egypt and Hamas to a deal which stipulates that Hamas should take measures on the border that the Egyptian government view as necessary to improve its ability to deal with the growing security challenges in northern Sinai. This will be in exchange for Egypt reducing the impact of the blockade on the Gaza Strip as well as taking measures to improve the economic and living situation in the besieged territory.

It is clear that if the purpose of these measures is to restrict the ability of members of Salafist jihadi groups to move across the border separating Gaza and Sinai, then this would also serve Hamas's interests, as it is the target of hostility from these groups, a number of which have "excommunicated" the movement. In addition, Hamas is facing the consequences of what was a catastrophic mistake in trying to combine government of the enclave with resistance to the occupation, which gave Israel, as well as regional and international parties, another justification for imposing the suffocating siege on Gaza. The Islamic movement is concerned about improving the economic situation in Gaza, which has deteriorated so much that there could be an explosion of public anger against it.

However, in the event that a positive change does occur in the Egyptian government's position towards Gaza, the rationale for this transformation will go beyond all considerations regarding the security situation in Sinai. Important circles in the Egyptian security institution have acknowledged the failed strategy adopted by Cairo towards Hamas in the form of the siege, security measures aiming to dry out the sources of its military strength, political boycott, demonisation in the media, and delegitimising the movement by means of pushing the Egyptian judiciary to consider its military wing to be a terrorist entity. According to Palestinian figures who have visited Cairo recently, some officials from the security institution in Cairo are pushing for a new approach to be adopted that aims to contain Hamas by alleviating the siege and improving the economic situation, while using the shift in Egypt's position to influence the balances of power within the movement. This is especially due to the fact that Hamas is on the verge of holding critical internal elections, and therefore Egypt may influence one side over the other.

We can't imagine that Al-Sisi's government would make any change in their policies towards Gaza without coordinating with Israel, since it relies on the extremist, right-wing Israeli government in Tel Aviv to continue to provide it with international legitimacy. The Israeli position on Hamas is also subject to its own interests, and it seems apparent from the recent internal discussions that Tel Aviv's interests currently lie in improving the economic situation in Gaza out of fear that Hamas might engage in a military confrontation as a means of preventing a popular outburst due to the deteriorating economic situation. Such fears were clearly evident in the last meeting of the Ministerial Committee on National Security Affairs, during which Intelligence Minster Yisrael Katz once again proposed the idea of establishing a floating harbour off the coast of Gaza.

Another motivation for the shift in Cairo's position towards Gaza is Egypt's angry reaction to Palestinian Authority President Mahmoud Abbas's rejection of the pressure from Al-Sisi to restore Mohammed Dahlan to Fatah's ranks and allow him to play a leading role in Palestinian affairs.

In any case, contrary to what some Hamas officials believe, the promised shift in the Al-Sisi government's position on Hamas and Gaza will be tactical and not strategic. This is due to the fact that working on accumulating international legitimacy by getting involved in the war on "Islamic terrorism" is at the top of the list of strategic constants for the current regime in Cairo. Al-Sisi's delight at his recent phone call with US President Donald Trump and his boast that they are both on the same page in terms of the war on "terrorism" reflects the rooting of this strategy within the government as a means of security legitimacy.

As such, regardless of Hamas's behaviour towards Egypt, Al-Sisi can turn against the movement very easily if he believes that the new resident of the White House would welcome such a move. If we take into account the general agreement between the Trump administration and the Israeli government, then we can understand that Al-Sisi's sensitivity to the Israeli considerations, including those regarding Hamas, will grow. If Israel believes at some time in the future that it is in its best interest to wage a war on Gaza, then Al-Sisi would most likely adopt the same position that he did during the 2014 military offensive.

Gaza is eager to get rid of the unlawful blockade imposed on it, and so any shift in the Egyptian position that reduces the effects of the siege will be considered as a positive and important development. However, it is important to be aware of the environment surrounding this expected shift in Egypt's position and not to rely too much upon it, just in case there is a painful disappointment.