FBI agent assigned to investigate Daesh fighter married him instead

An FBI translator who was assigned to investigate Daesh ended up marrying one of its fighters. The 38-year-old employee, Daniela Greene, was said to be so in love with a German born Daesh operative that she left her husband in the US to be with him in Syria and then lied to US authorities about her whereabouts, according to CNN.

The incident, which has never been publicised, exposes an embarrassing breach of national security at the FBI, which has been on a mission to root out Daesh sympathisers across the country.

Greene got married to Denis Cuspert, a German rapper turned Daesh fighter who had been on the radar of counter-terrorism authorities on two continents.

Cuspert, above, was a rapper in Germany before he became known for his terror videos for Daesh recruitment, including ones in which he held up freshly-cut off heads

CNN discovered that Cuspert went by the rap name Deso Dogg. In Syria, he was known as Abu Talha Al-Almani.

Greene was asked to investigate Cuspert in January 2014. It's said that by June she was already smitten by Cuspert and was making plans to be with him in the Middle East. They reportedly tied the knot in Syria sometime that month.

Within weeks of marrying, Greene realised she had made a terrible mistake. She fled back to the US, where she was immediately arrested and agreed to cooperate with authorities. She pleaded guilty to making false statements involving international terrorism and was sentenced to two years in federal prison. She was released last summer.

"It's a stunning embarrassment for the FBI, no doubt about it," said John Kirby, a former State Department official. Kirby who was quoted by CNN, said he suspects Greene's entry into Syria required the approval of top Daesh leaders. 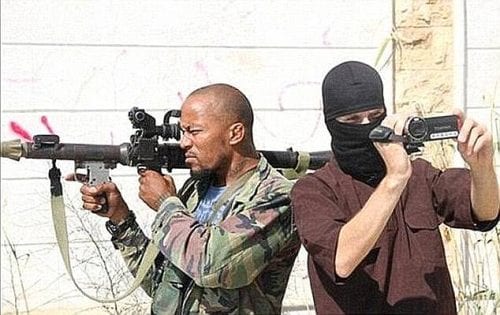 Denis Cuspert, (left) known as Abu Talha al-Almani, married an American FBI agent, who fled their relationship after a month

Greene's two-year sentence was less than punishments given to other defendants charged with terrorism-related crimes.

Greene, who now works as a hostess in a hotel lounge, said in a brief interview with CNN that she was fearful of discussing the details of her case.

"If I talk to you my family will be in danger," Greene said. She declined further comment.

In October 2015, the Pentagon said Cuspert was killed in an airstrike near the northern Syria city of Raqqa.

Nine months later, on 3 August 2016, the Pentagon released a statement reversing its assessment of Cuspert's death: "It now appears that assessment was incorrect and Denis Cuspert survived the airstrike."