As soon as the Arab show of unity with US President Donald Trump in Saudi Arabia had ended, a row broke out between US oil-producing allies that Trump had met and praised during his visit to the kingdom.

Three days after Trump and King Salman declared Iran to be the main sponsor of terrorism, Saudi Arabia and the United Arab Emirates accused Qatar of trying to undermine efforts to isolate the Islamic Republic. Saudi newspapers, clerics and even some celebrities attacked the Qatari Emir, Sheikh Tamim Bin Hamad Al-Thani, accusing him of "stabbing his neighbours with Iran's dagger", as they put it.

Analysts pointed out that Saudi Arabia and the UAE are striving to crush any opposition that seeks to weaken the united front against Iranian influence in the Middle East. Both countries are also exerting pressure on Qatar to end its support for Islamic movements such as the Muslim Brotherhood and Hamas.

One wonders whether this alignment makes the Saudis feel qualified to eliminate anyone within their region or their allies who may try to pursue a more independent path.

Internal disputes among Gulf countries could limit their appeal to foreign investors. Even before Trump's visit, Site Group stated that rising tensions between the United States and Iran could also have a "huge" impact on oil and financial markets. 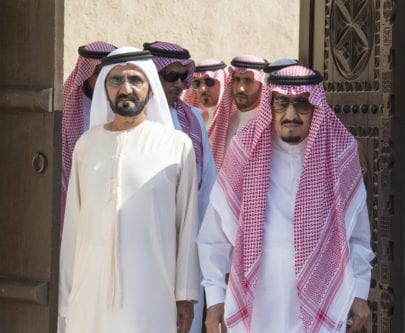 Trump spent two days in Riyadh where he oversaw deals worth around $400 billion. He also held talks with Sheikh Tamim to discuss Qatar's purchase of American military equipment and said that "the two countries had been friends for a long time".

That did not stop Saudi Arabia and the UAE, however. Media outlets soon launched a war against Qatar, their attacks escalating after a phone conversation between Sheikh Tamim and Iranian President Hassan Rouhani over the weekend, which was seen as a clear challenge to the Saudi criticism.

According to Paul Sullivan, a Washington-based Middle East expert at Georgetown University:

Some Gulf States see Qatar as 'too soft on Iran'. Qatar and Iran share a vast natural gas field and are close neighbours.

Saudi Arabia's Okaz newspaper accused the Qatari Emir of "committing the gravest mistake" by supporting "terrorist groups and the sectarian Iranian regime". On Tuesday, Al-Eqtisadiah newspaper accused Qatar of being "an emirate of coups and treachery".

Institutional and private investors from GCC countries sold 34.6 million riyals ($9.5 million) of Qatari shares on Monday, most of them in a single trading session. Qatar's stock market index fell by 0.5 per cent.

Disagreements among the six Gulf nations have erupted in the past. In 2014, Saudi Arabia, UAE and Bahrain temporarily withdrew their ambassadors from Qatar. The conflict centred on Egypt, where Qatar supported the Muslim Brotherhood government while the Saudis and UAE financed the army-led regime that overthrew the Muslim Brotherhood.

Sullivan said: "They were supporting some Syrian and Libyan groups while the Egyptians, Saudis and Emiratis had serious problems with them." He added that this matter, along with its relations with Iran, showed that "Qatar is acting above its strategic weight."

In 2015, Saudi Arabia brought together an alliance of Sunni countries to fight Shia Yemeni rebels who were loyal to Iran after the Gulf-backed government was overthrown.

Mehran Kamrava, director of the Centre for International and Regional Studies at Georgetown University in Qatar, said that Saudi Arabia and UAE see an opportunity to assert their influence after Trump's visit.

Internal differences and disagreements are nothing new but what is interesting is the timing and level of pressure, which is fairly unprecedented. This indicates that Saudi Arabia and the UAE will stop at nothing other than complete submission by Qatar.