Looking at Myanmar, it is clear that the ICC is not fit for purpose 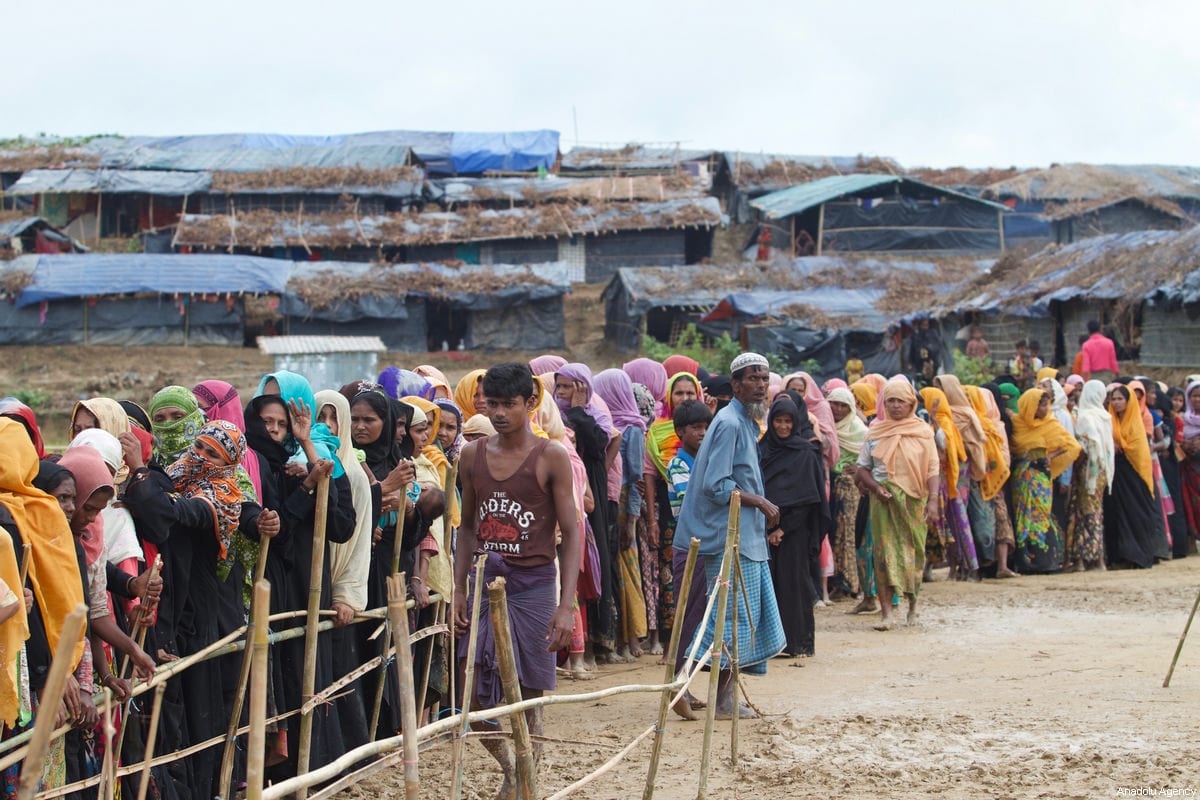 Rohingyas, who fled from the ongoing military operations in Myanmar, line up for food aid at a refugee camp in Bangladesh on 24 September 2017 [Safvan Allahverdi/Anadolu Agency]

Nobel Peace laureates and other luminaries are queueing up to berate Aung San Suu Kyi for failing to intervene in the genocide unfolding in Myanmar. There are, however, bigger villains lurking in the shadows to blame for what is happening to the Rohingya people.

The vilification of Suu Kyi and her spectacular fall from grace – a saint turned sinner in the eyes of the international community – has delighted the faceless military leaders who have for years resented her iconic status as a fearless fighter for democracy who would always defend the oppressed. While many feel understandably angry at her denial of what the UN has described as "ethnic cleansing", the real villains who have masterminded the brutal scorched-earth campaign against the Rohingya Muslims are the officers and men of Myanmar's army led by Senior General Min Aung Hlaing.

The number of refugees fleeing the violence and heading for neighbouring Bangladesh now stands at around 410,000, but there is still little indication that the 61-year-old general is considering a cessation of hostilities. Human rights groups, charities and NGOs on the ground say that there are definite no go areas in Rakhine State and you have to wonder why.

The UN has already branded the Myanmar government's offensive as a "cruel military operation" which "seems a textbook example of ethnic cleansing", yet the international organisation is extremely reluctant to use the word genocide to describe what is going on. For that, the faceless mandarins in the UN are even more despicable in their silence than the likes of the very pointless Suu Kyi.

Right now, as I write, some of the worst human rights violations in the world are still taking place against the Rohingya Muslims, and not for the first time. This is nothing new. Cries of "never again" when it comes to genocide obviously do not apply to people of colour or those of the Muslim faith.

The Genocide of the Rohingya: Big Oil, Failed Democracy and False Prophets

Over the years there have been countless atrocities meted out on the Rohingya by Myanmar's military. In 2005, for example, Home Minister Ko Ko and two current senior military commanders serving under the previous military junta, supervised what appear to be war crimes, according to a study by Harvard Law School published in November 2014. If the contents of the report bear scrutiny, then these three are guilty of war crimes which, according to the evidence produced, links them to executions, torture and other atrocities.

The report, published by the school's Institutional Human Rights Clinic, followed a three-year study which found enough evidence to issue arrest warrants for Ko Ko, Brigadier General Khin Zaw Oo and General Maung Maung Aye to face charges of war crimes and crimes against humanity at the International Criminal Court. Ko Ko was the leader of the Southern Command at the time, while Khin Zaw Oo, the current commander of the Bureau of Special Operations, and General Maung Maung Aye, were also senior officials in the junta accused of brutal campaigns against armed ethnic rebel groups. The Harvard report's findings were based on more than 150 interviews with people in Myanmar and along the Myanmar-Thailand border, including former government troops who witnessed the junta's 2005-2006 counterinsurgency operations in the south-eastern district.

Several reports similar in content and gravitas to Harvard's have emerged from subsequent upheavals and atrocities carried out against the Rohingya, including in 2012 when thousands took to the seas in rickety boats to escape persecution by the military.

Since the political and economic reforms of 2010, Myanmar's relations with the West have improved and sanctions have been lifted, but the US and European Union, in particular, seem more preoccupied with securing trade deals than putting pressure on the regime to implement human rights reforms. Myanmar's government has in the past made promises to roll out reforms but has not followed through with those pledges.

After reading previous witness accounts over the past decade, what is happening today creates a feeling of déjà vu. These accounts are harrowing, with soldiers forcibly removing and relocating civilians from conflict zones; firing mortars at villages; shooting at fleeing villagers; destroying homes, crops and food stores; laying landmines in civilian areas; enslaving villagers to work as porters; and capturing and executing civilians.

So we have to ask ourselves this simple question: if those military leaders had been hauled before the International Criminal Court (ICC) back in 2006, would Myanmar's army of today have dared to act with such genocidal intent in Rakhine State today? The answer is equally simple; most probably not.

While Suu Kyi, the de facto Prime Minister of Myanmar, may not have blood on her hands her silence has served to protect those who do, which makes her a rather despicable individual. As it is, she is now reaping the rewards of her vile behaviour by being catapulted to the boondocks of international society. I have a feeling that honorary degrees and international platforms in the West will no longer be offered to Myanmar's social pariah in the future. She can now reflect in a swamp of her own making but it is hard to see how she can ever regain her global rock star status.

However, thanks to others we are now getting to know the faces and identities of those responsible for carrying out war crimes in Myanmar both today and back in 2005/6. Why, then, is the UN so reluctant to act and use the word "genocide"? As soon as it does, then it will have to issue arrest warrants for those suspected of war crimes against the Rohingya people; and so will UN member states.

Hence, the UN's silence is reprehensible and even more unforgivable than Suu Kyi's silence, because its action could actually make a huge difference. UN Secretary-General Antonio Guterres describes what is happening as "catastrophic", while the UN High Commissioner for Human Rights, Zeid Ra'ad Al-Hussein, went one step further by calling it "ethnic cleansing". The situation in Myanmar is more than "catastrophic", though; it is more than "ethnic cleansing"; it is another Rwanda, Srebrenica, Kosovo; it is genocide.

With the UN's reluctance to call it out for what it is makes its senior officials' words meaningless. If the powers that be continue to turn a blind eye we can only conclude that the ICC, established in 2002 by the Rome Statute, is no longer fit for purpose.

This was the conclusion reached by the South African government at the African Union summit in Johannesburg in 2015. Many African countries signed up to the ICC post-1998; it was viewed as a court that promised to pursue injustice without fear or favour, but African leaders insist that that is not what has happened.

No doubt others will also view the ICC as being institutionally flawed if it does not act swiftly over what are clearly war crimes being committed in Myanmar today and in years gone by. The court is already mired in accusations of racism, blatant double-standards, hypocrisy, corruption and serious judicial irregularities so you can't help but wonder what has to be done to get the "world's court" to swing into action for the Rohingya people.

The institution has special prosecutorial rights of referral and deferral to the UN Security Council; by default, the council's five permanent members (three of which – China, Russia and the US – are not even ICC members) could act. This begs us to ask whether the UN is indeed a force for good, or if that too is selective in how it operates.

Erdogan to Muslim countries: 'use every means available' to stop 'cruelty' against Rohingya

Despite having received more than 9,000 formal complaints about alleged war crimes in at least 139 countries, the ICC has largely chosen to indict around 40 black Africans in eight African countries. In doing so the ICC has ignored all Western human rights abuses in conflicts such as those in Afghanistan and Iraq, and war crimes and crimes against humanity committed by the West's client states. Attempts to charge Israeli generals with war crimes, for example, have never made it beyond the first stage at the ICC which, at the moment, clearly has no interest in what is unfolding in Rakhine State, or Palestine for that matter.

Sadly, unless the international community takes swift action against the monsters in Myanmar by putting these people before the ICC, the Rohingya will soon only be remembered alongside the genocide victims of Rwanda, Srebenica and Kosovo.

According to a 2015 briefing report on the Rohingya published by the Equal Rights Trust, the majority live in "unofficial camps or ghettos where they receive no help. The Rohingya situation is strikingly reminiscent of Jews in Nazi Germany or apartheid-era South Africa."

Strong words indeed, but are they enough to end the plight of the Rohingya Muslims which has gone on long enough? Handing back a Nobel Peace Prize won't make any difference to the victims of Myanmar's genocide, but if the ICC and its senior officials have any self-respect and any care at all for justice in this world, then arrest warrants for alleged war crimes should be issued today, starting with Senior General Min Aung Hlaing.