The legal, political and popular consequences of Trump's plans for Jerusalem 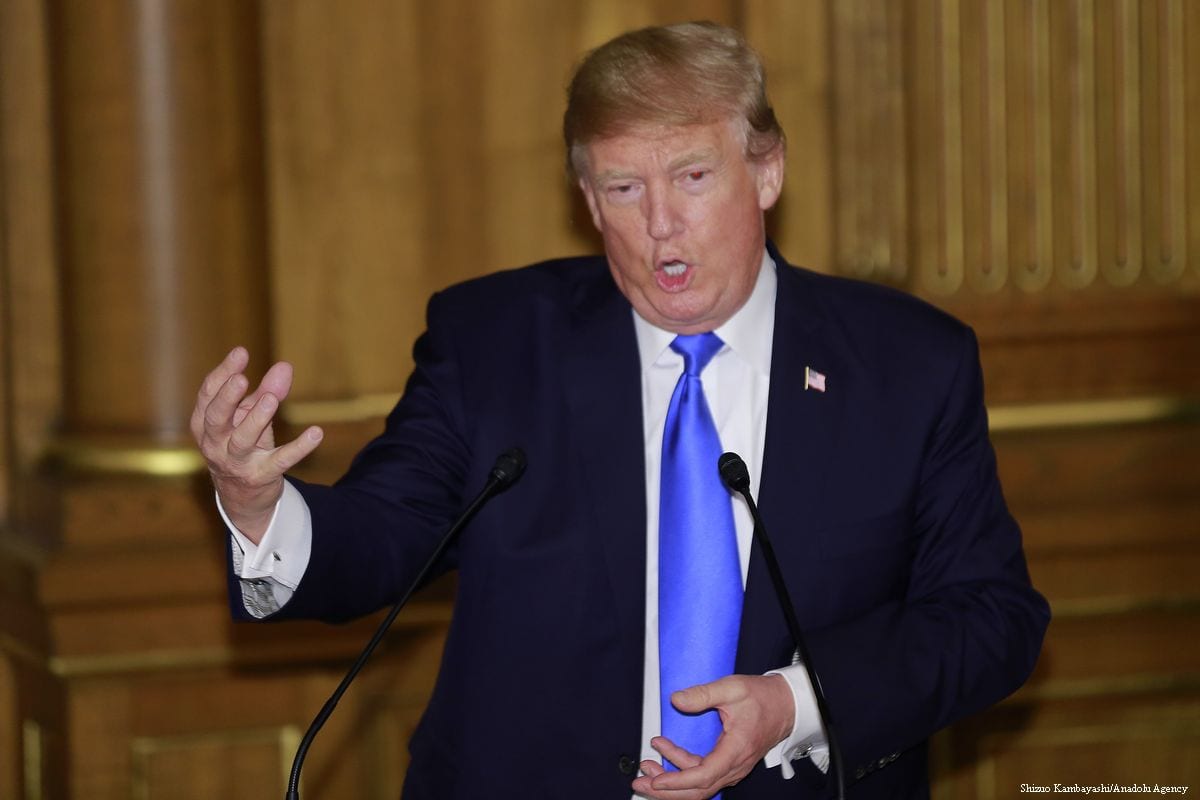 If the leaks about US President Donald Trump's announcement of a shift in the US position on occupied Jerusalem tomorrow are true, then the Palestinian issue and the Arab-Israeli conflict will have entered a new, unprecedented phase since 1967. That was the year that the fate of Jerusalem formed one element of the Palestinian cause.

If America actually recognises Jerusalem as the capital of Israel and moves its embassy there, which many are linking to America's upcoming announcement on the so-called comprehensive settlement or comprehensive deal, it will give Israel everything and literally nothing to the Palestinians.

While a strong Arab reaction is not expected, given the current Arab governments, a popular reaction, especially in the occupied Palestinian territories and among the Palestinian communities in diaspora, will most likely be the greatest. This warns of a new intifada that could theoretically be much bigger than the previous intifadas. There may also be a popular Arab and Muslim reaction against the Palestinians.

In the event that the US president moves forward with this decision, there are two possible scenarios. First, there is a possibility that Trump will announce recognition of occupied Jerusalem as Israel's capital, and, at the same time, issue orders to begin the process of moving the American embassy from Tel Aviv to Jerusalem. The second scenario would be Trump's announcement of the US' recognition of occupied Jerusalem as the capital of Israel and, at the same time, sign a presidential decree delaying the implementation of Congress' decision to move the embassy to Jerusalem by six months.

Read: PA to abandon all previous deals if US embassy moved to Jerusalem

There are some in Tel Aviv and the US who believe that the successive dramatic developments regarding the Russian intervention in the US elections and the revelation that Trump's former national security adviser, General Michael Flynn, may agree to testify against him in this case, will strengthen the chances of the US President actually going through with this step in order to reinforce his internal status by courting Israel's friends in Congress, many of whom are members of the Democratic Party and Jewish lobby groups.

At the same time, the other Israeli and American leaks, referred to by Israel's Channel 2 indicate that it is unlikely that Trump will progress towards any of the two scenarios, as some of his advisors have warned him of the consequences of announcing any shift in the American position on Jerusalem on the fate of the American efforts aiming to formulate an initiative to resolve the Palestinian-Israeli conflict. Furthermore, such a move may lead to political embarrassment for Arab countries that Washington is counting on for their role in passing the American settlement initiative. This especially applies to Saudi Arabia, Egypt and Jordan. It will also lessen the manoeuvring margin for the PA leadership.

If the leaks are true and Trump actually announces his country's recognition of occupied Jerusalem as Israel's capital, only, or if he follows this up with announcing steps to move the American embassy to the Holy City, this will have a negative effect on the American ability to announce its settlement initiative, regardless of its content.

Also, the legal consequences of America's upcoming announcement depend on the content of the announcement itself. If Trump announces "united" Jerusalem (East and West Jerusalem) as Israel's capital, then this move will have very dangerous legal implications. It will be a dramatic reversal of the American position on Israel's occupation of the Palestinian territories after the 1967 war, and obliterates Washington's position on the settlement issue in the city.

Read: Trump delays announcement on whether US embassy to be moved to Jerusalem

Such recognition would mean that the US no longer sees the Israeli presence in East Jerusalem as a form of occupation, and this would mean an American recognition of the legality of the Jewish settlements built by Israel after the 1967 War. Some of these settlements were built on land considered the West Bank that was later annexed within the borders of occupied Jerusalem.

In addition to this, such a move would represent a political and practical embodiment of resolving the Jerusalem issue, before embarking on any negotiations. It also confirms that this cause is no longer one of the permanent solution issues. If the recognition of "unified" Jerusalem as the capital of Israel coincides with the announcement of beginning the process to move the embassy, this would be another practical representation of America's recognition of Israel's control of Jerusalem.

This move could lead to major security implications, as it could pave the way for a popular Palestinian reaction that could ignite the situation in the West Bank and occupied Palestinian territories. Fear of this scenario has made some Israeli military commentators express reservations regarding Trump's next step. This was expressed by Roni Daniel, the military commentator for Israel's Channel 2.

It could also affect the internal Palestinian arena in a manner that positively reflects on the chances of implementing the reconciliation agreement reached by Fatah and Hamas. This is due to the fact that Trump's move could lend credibility to the calls for immediate reconciliation. 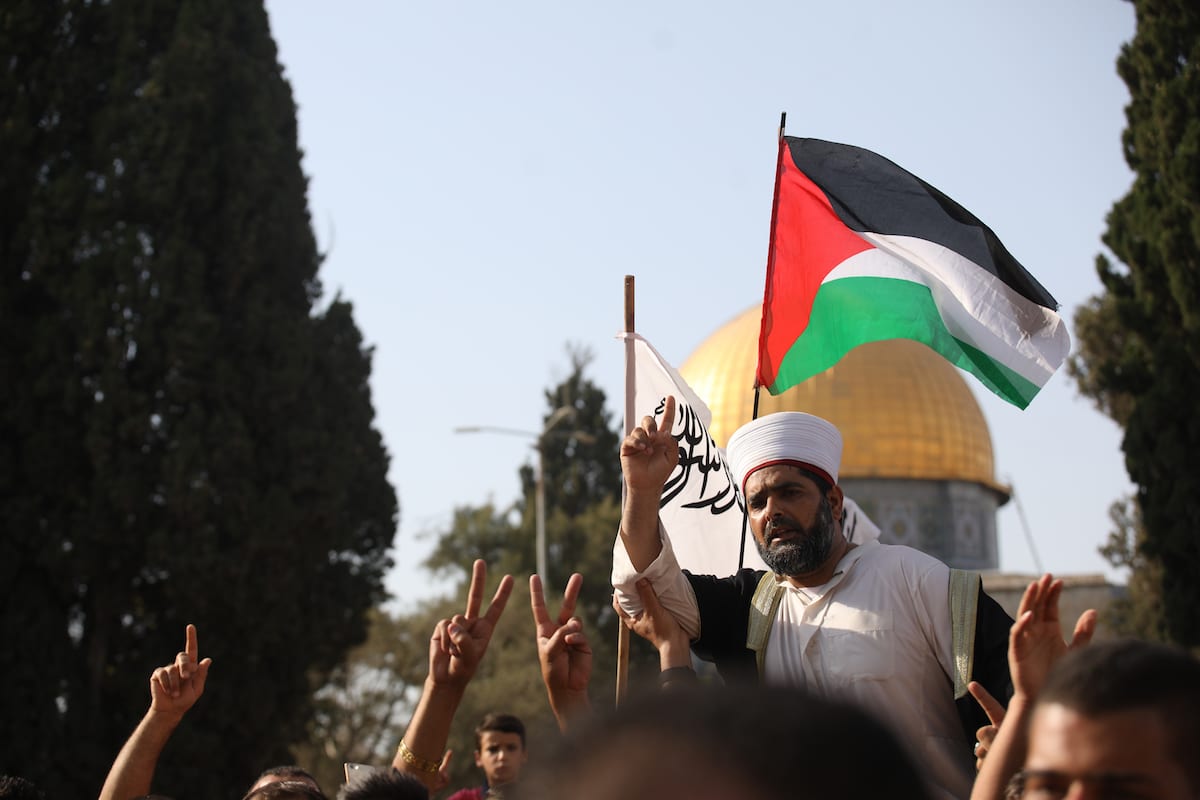 Palestinians hold flags outside the the Al-Aqsa Mosque Compound in Jerusalem, on 27 July 2017 [Mahmoud İbrahem/Anadolu Agency]

On the other hand, given the fact that a team within the Trump administration is aware of the potential ramifications of such a step, it is not unlikely that the American president will ultimately back down from it. Instead, the hubbub left by the leaks regarding the upcoming announcement may be utilised to pressure the PA leadership to accept the ideas in the draft of the American initiative to resolve the Palestinian-Israeli conflict referred to on Saturday by some Arab media outlets. This initiative calls for declaring a Palestinian state with temporary borders on about 50 per cent of the West Bank's area, with Israel maintaining security and sovereignty privileges over the borders and airspace. It also suggests providing a large financial aid package for the future "state".

It is clear that there isn't even the slightest chance that the PA leadership will accept such proposals, as the suggestions are basically a distorted version of self-governance. All of the parties in the Palestinian arena, including PA President Mahmoud Abbas, who has repeatedly announced his rejection of the idea of a state with temporary borders, are aware that accepting this idea would be a liquidation of the Palestinian cause, as it also excludes a solution for the refugee issue.

Given the ideological differences between Israel's left and right wing forces regarding their position on the projects to resolve the conflict, and the fact that head of the Labour Party, Avi Gabbay, who claims to lead the "peace camp" in Israel has openly refused to evacuate even one of the Jewish settlements in the West Bank, the Palestinian leadership has even more motivation to avoid positively responding to the American initiative.