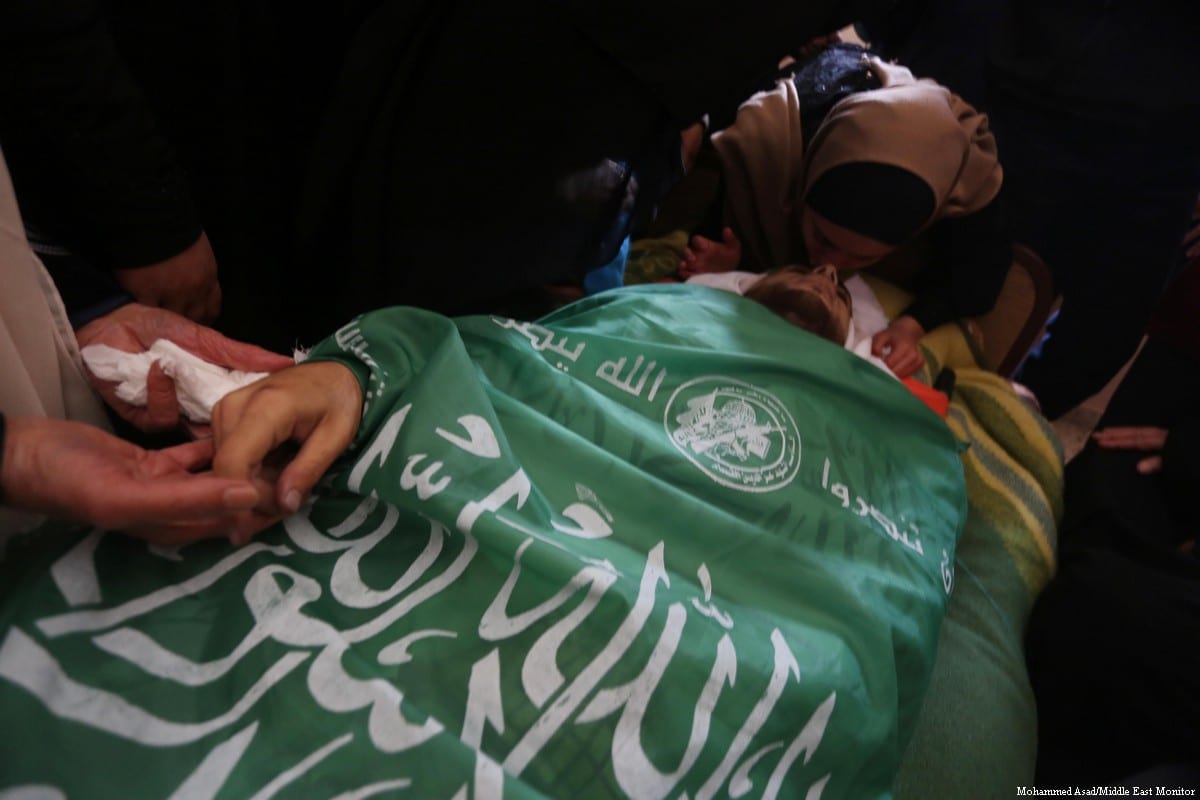 Palestinians carry the body of a Palestinian who was shot dead by Israeli forces during a protest in Gaza on 5 April 2018 [Mohammed Asad/Middle East Monitor]
April 6, 2018 at 4:17 am

Israeli fire killed a Palestinian at the Gaza border on Thursday and another died of wounds suffered several days ago, health officials said, bringing to 20 the number of Palestinian dead from a week of frontier protests, Reuters reports.

The Israeli military said one of its aircraft targeted an armed militant near the security fence along the Gaza Strip.

Tens of thousands of Palestinians are holding a six-week-long protest in tent encampments along the fenced border of the Israeli-blockaded Gaza Strip, an enclave of 2 million ruled by the Hamas.

The demonstrators are pressing for a right of return for refugees and their descendants to what is now Israel.

The latest deaths are likely to add to international concerns over the violence, which human rights groups have said involved live fire against demonstrators posing no immediate threat to life.

UN Secretary-General Antonio Guterres has called for an independent investigation into the deaths on the first day of the protest last Friday, and B'Tselem, an Israeli rights group, urged Israeli soldiers to "refuse to open fire on unarmed demonstrators." Orders to do so were "manifestly illegal," it said.

Read: Why did Palestinians take part in the Great March of Return?

The United States, however, directed its criticism at the protest leaders. "We condemn leaders and protestors who call for violence or who send protestors – including children – to the fence, knowing that they may be injured or killed," President Donald Trump's Middle East peace envoy, Jason Greenblatt, said in a statement on Thursday.

Sixteen Palestinians died after being shot by Israeli troops on the first day of the demonstrations, Palestinian medical officials said, and another was killed on Tuesday.

A 33-year-old man, hit by Israeli fire a few days ago near one of the tent cities, died on Thursday, the officials said.

Israel says it is doing what is necessary to defend its border. The military said that its troops had used live fire only against people trying to sabotage the border fence or rolling burning tyres and throwing rocks.

On Thursday, Brigadier-General Ronen Manelis, Israel's chief military spokesman, cautioned that Israel might attack deeper inside Gaza if the demonstrations did not stop.

"We have information that tomorrow, under a smoke screen and civilian cover, Hamas intends to carry out terrorist attacks against our civilians and troops, and cross the fence," he said.

"We have no interest in harming women and children who are protesting. They are not our enemies. We have one intention, not to allow terrorist attacks against our civilians and troops on the other side of the fence."

Many of the demonstrators who turned out for the first wave of protests along the border returned to their homes and jobs over the week. But organisers expect large crowds again on Friday, the Muslim sabbath.

Protesters on Thursday were bringing more tents and thousands of tyres to burn, in what has become known as "The Friday of Tyres." They say they intend to use mirrors and laser pointers to distract Israeli sharpshooters.

"Friday is going to be a special day, they will see that we are not afraid," said one Palestinian youth as he delivered tyres to the area. But Ahmed Ali, a 55-year-old teacher, said that while he wanted his family to see the tent camp, he would not come back on Friday.

I taught my children one day we will be returning to Jaffa, our home, but I can't allow them to throw stones because the Israelis won't hesitate to kill them

Hamas said on Thursday it would pay $3,000 to the family of anyone killed in the protests, $500 for critical injuries and $200 for more minor injuries. Israeli leaders say that such payments serve to instigate violence.

Visiting the frontier this week, Israeli Defence Minister Avigdor Lieberman warned protesters that "every person who comes close to the fence is endangering their lives."

The protest action is set to wind up on May 15, when Palestinians mark the "Naqba", or "Catastrophe", when hundreds of thousands fled or were driven out of their homes during violence that culminated in war in May 1948 between the newly created state of Israel and its Arab neighbours.

Israel has long ruled out any right of return, fearing it would lose its Jewish majority.