Trump's Administration will fail to break the Palestinians

Trump and Netanyahu are now brothers in arms in racism against the Palestinians
September 11, 2018 at 5:30 pm | Published in: Article, Asia & Americas, Israel, Middle East, Opinion, Palestine, US 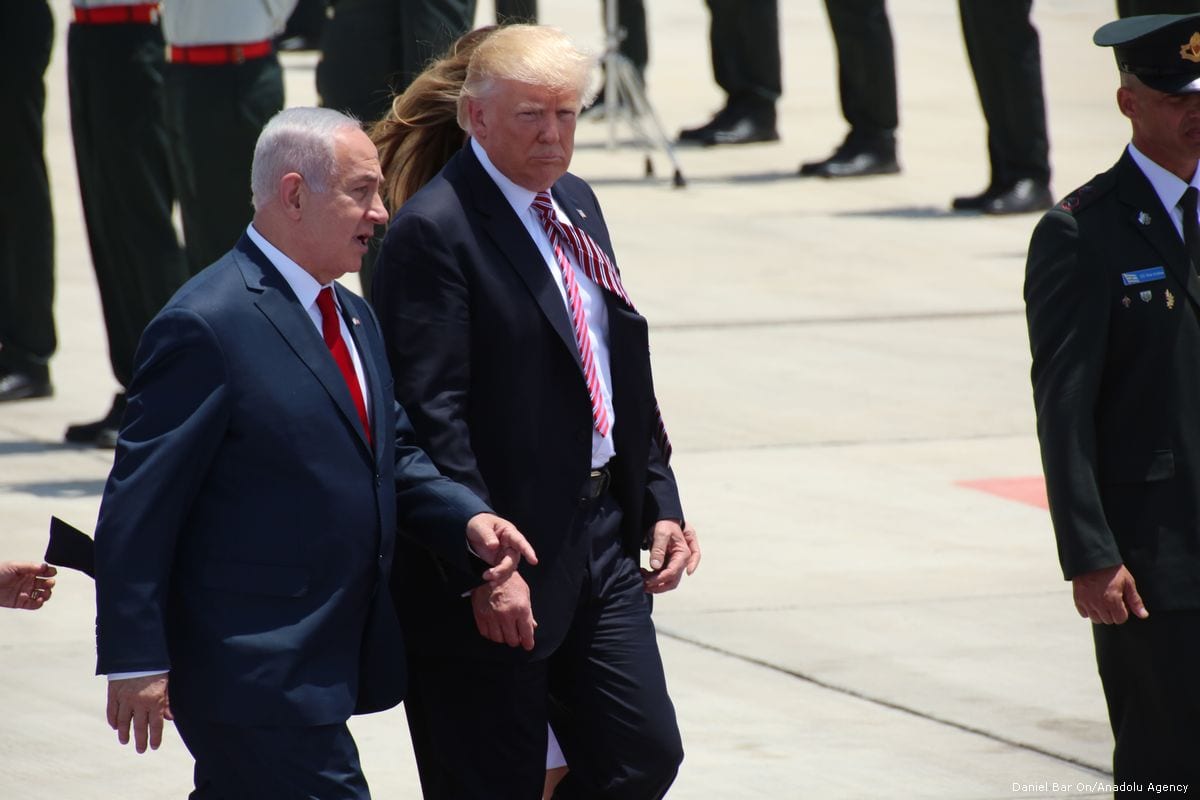 The Palestinian people and their cause are facing an existential threat in their homeland. Anyone who thinks that this an exaggeration should remember how many times since US President Donald Trump took office that the phrase "I can't believe what he has just done" was used. People said that when he appointed his anti-Palestinian "dream peace team" made up of his son-in-law Jared Kushner, former company lawyer Jason Greenblatt and former bankruptcy lawyer David Friedman. All three are ardent supporters of Zionism, Israel and the settlement enterprise. Unbelievably he recently added war monger and Palestinian-hater John Bolton as National Security Adviser.

They said that it was unbelievable that Trump broke with every previous American president since Bill Clinton by recognising Jerusalem as the capital of Israel in December last year. He followed this by moving the US Embassy from Tel Aviv to Jerusalem in record time. His daughter and son-in-law inaugurated it on the 70st anniversary of the Palestinian Nakba as over 60 Palestinians were murdered at the Gaza fence marching peacefully to return to the homes they were expelled from in 1948. Trump had the audacity to claim that his move would bring peace closer because it would take Jerusalem "off the table".

They said it was unbelievable when Trump initially cut and recently ended the US contribution to UNRWA, the UN agency which has delivered vital services to the most vulnerable Palestinians, the refugees. Rather than exert pressure on Israel to allow them to peacefully return to their homes, Trump parroted Israeli Prime Minister Benjamin Netanyahu's claim that the agency "perpetuates" the refugee problem by passing this status from one generation to another. Facing severe financial difficulties as a result of this immoral US move, the agency's schools which reopened recently for the new academic year warned that they may have to close at the end of September unless the $217 million deficit is plugged by others. Palestine was recently reported to have one of the lowest illiteracy rates in the world.

Jared Kushner was reported to have tried to pressure King Abdullah of Jordan to remove the status of some two million Palestinian refugees residing in his Kingdom, which the King refused to do.

They said it was unbelievable when the US cut funding to the Palestinian Authority by $200 million but kept funding for the security services, which secure |Israel, not the Palestinians. What was even more unbelievable was the American administration's decision to cut its $25 million of funding for the treatment of cancer in Palestinian hospitals in East Jerusalem. This sickening decision hits the most vulnerable with immediate effect.

It should be unbelievable that the neither the US nor the EU have condemned Israel's racist and Apartheid confirming Nation-state Law. However, we all remember which side the US and EU took when blacks in South Africa were fighting for their freedom and the end of Apartheid there.

Perhaps less unbelievable was the decision to close the PLO Office in Washington. This has been on the cards for some time, but presumably Sheldon Addison and AIPAC could not bear seeing the Palestinian flag lying in Washington. However, what is unbelievable is that Congress still considers the PLO a terrorist organisation, despite the White House rolling out the red carpet for first Yasser Arafat and then Mahmoud Abbas on a number of occasions and despite the famous signing of the Oslo Accords and the famous Rabin-Arafat handshake on the White House lawns in 1993. Trump himself met Abbas in Bethlehem on his first visit as president to the region last year. The reason given for the closure was the PA's refusal to return to meaningless negotiations and to dare to refer Israel to the International Criminal Court (ICC).

It was therefore not unbelievable, though it should be, to watch John Bolton rubbish and threaten the ICC with sanctions in his recent speech. He directly threatened judges if they actually do their work and bring to justice not just American citizens but Israelis suspected of war crimes. He warned: "If the court comes after us, Israel, or other US allies, we will not sit quietly," adding: "We will ban its judges and prosecutors from entering the United States. We will sanction their funds in the US financial system, and we will prosecute them in the US criminal system. We will do the same for any company or state that assists an ICC investigation of Americans."

Read: The debate on UNRWA takes focus away from the realities of Palestinian refugees

Working in cahoots with US Ambassador to Israel David Friedman, Bolton clearly does not consider the West Bank or East Jerusalem as occupied. In his speech he referred to the construction of illegal Israel settlements as simply "Israeli construction of housing projects on the West Bank", which he castigated the ICC for even considering prosecuting Israeli leaders for sanctioning and funding. Unbelievable too was Israeli high court proclamation that settlers acted "in good faith" when they built illegally on Palestinian land.

With Jerusalem "off the table", settlements just construction projects, no right of return for Palestinian refugees, no recourse for Palestinians to the ICC and UN Security Council paralysed by an Israeli veto (yes) and an administration that is content with supporting Israel both politically and to the tune of $3 billion per year, the Palestinian cause faces an existential threat.

However, not only is the cause facing an existential threat, the Palestinians themselves are facing an existential threat. Israel's Nation State Law gave only Jews the right to self-determination within whatever borders Israel claims for itself but not to Palestinians. It further recognised Jewish only settlements as a "national value". If only Jews have a right to self-determination in Israel then they could decide they do not want any Palestinians in the area Israel rules.

A racist Israeli state is now supported by an American administration that is racist against the Palestinian people. It sees them as having no rights whatsoever, apart from any crumbs that Netanyahu and his extremist government will give them but only if that does not impact Israel's security, whatever that means.

Having failed to "encourage" Palestinians to leave of their own accord through 70 years of oppression, it may be the right moment for Israel to put all Palestinians on busses to Jordan and "Greater Gaza", which has been talked about as part of Trump's "ultimate deal". Is that beyond belief? Just think who would act to stop it if it tried? It certainly won't be America, the EU or the Arab states. It also won't be the UK as this will be a further fulfilment of the Balfour Declaration, whose centenary it celebrated last year.

The only thing that will stop it, which Trump has not built in as a factor in his immoral "ultimate deal" is the resilience of the Palestinian people, all 13 million of them. He should have realised this on the day the embassy was moved when over 60 Palestinians were killed in Gaza. That has not stopped them going to the fence again and again and again as they have done since 30 March. The Palestinians will outlast Trump's administration. However long it takes they will stay and fight for their very existence in their homeland and those in the diaspora will not give up on their right to return. After all they are the people of the land not Israeli settler colonialists whose resilience will waiver and whose hold on the land is only maintained through the barrel of a gun.