Support for Saudi royals as kingdom comes under attack 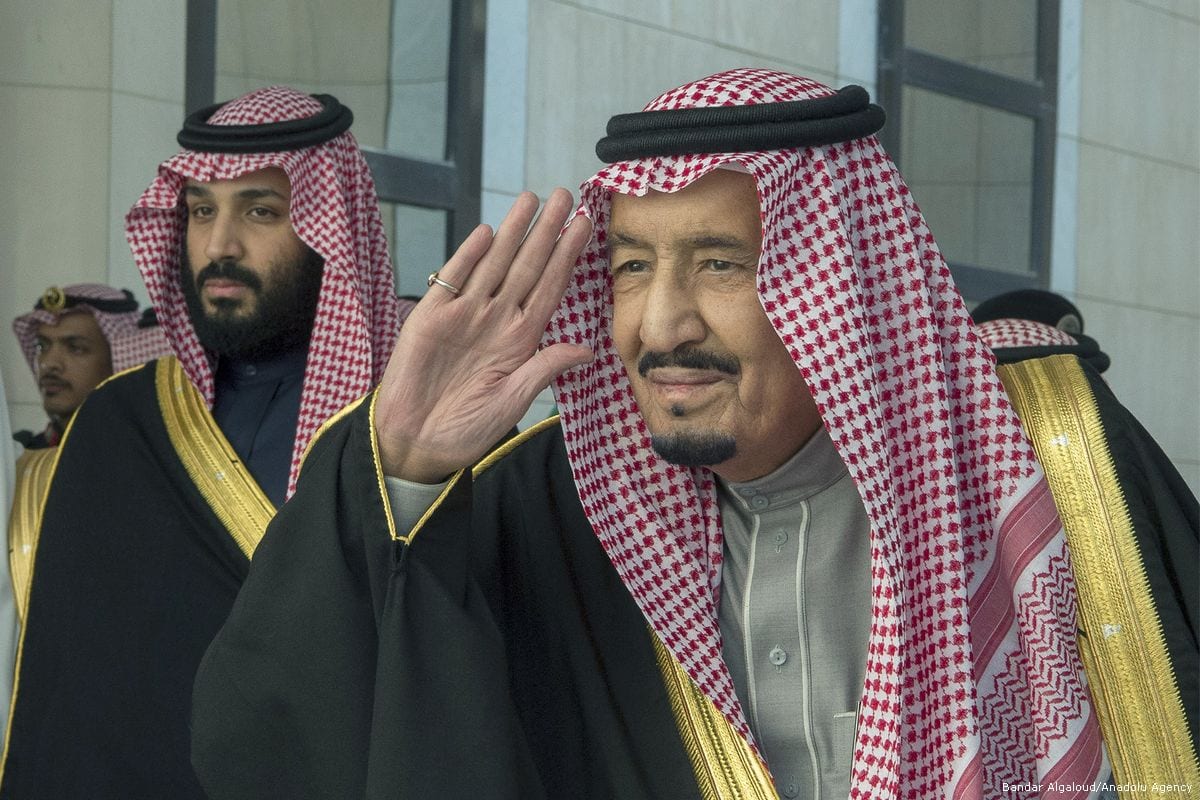 A hashtag in support of Saudi King Salman and his son Mohammed Bin Salman has gone viral on Twitter, in the wake of a war of words between the Kingdom and the US.

The Arabic hashtag "We are all Salman, we are all Mohammed" has been used over 120,000 times on Twitter today, reaching second place in the social network's listing of worldwide trends.

The statement gained popularity after Saudi Arabia rejected US threats to punish it over the disappearance of journalist Jamal Khashoggi in Istanbul, saying the kingdom would retaliate against any sanctions with tougher measures.

Supporters took to social media to post pictures of King Salman and the Crown Prince, expressing their solidarity with the country in the face of what they consider, insults against the kingdom's sovereignty.

The Kingdom of Saudi Arabia was and will always deal with challenges on:
Religion
Politics
Economy
Internal regulations
….. etc

But we the people of Saudi Arabia were and will always support our Holyland NO MATTER what !!#كلنا_سلمان_و_كلنا_محمد #Saudis_are_not_divided pic.twitter.com/9A8xvtdA6X

"We believe in our leaders," one Twitter post claimed, showing Bin Salman walking along a red line, indicative of the kingdom's disregard for the accusations that it had crossed a red line for its role in the disappearance of Khashoggi.

"We are proud of you, we trust you," another user declared.

#كلنا_سلمان_و_كلنا_محمد we proud of you , we trust of you.. whatever the enemies do, we are with you💚 #Saudi_Arabia pic.twitter.com/XxtdYausm2

One post included a brief poem in honour of the Royal Family, alongside photos of the king and crown prince.

"Who has taken our ambitions to the skies, who has contributed to the renaissance of our country, who has ignited the movement and change, we all trust him," the post reads.

Supporters of the Saudi government also used the hashtag "a word for the enemies of our kingdom", to convey messages to the US and Turkey that have led the investigations into Khashoggi's disappearance and reports that he had been killed.

#كلمه_لاعداء_مملكتنا_السعودي
we are pure of pure honey for those who wanted our friendship and we are the poison of those. who want to disturb our ranks🇸🇦. pic.twitter.com/XXUwWa1X7Z

"They didn't hear what have we said 'Saudi Arabia is not a banana republic'," one user wrote, citing the comments of Saudi Foreign Minister Adel Al-Jubeir, who criticised Canada earlier this year as violating the country's sovereignty, when it recommended that the kingdom release women's rights activists.

who threaten Saudi Arabia "The Great" with severe punishmen are definitely deaf. They didn't hear what have we said "Saudi Arabia is not a banana republic" #كلمه_لاعداء_مملكتنا_السعودي#Saudi_Arabia#Great_Saudi_Arabia pic.twitter.com/qmMYSYEDu5

Saudi Arabia's stock market plunged yesterday as investors worried about its deteriorating relations with the international community. The diplomatic war or words with the US caused the stock market of the world's biggest oil exporter to lose as much as $33 billion of its value, in one of the first signs of the economic pain that Riyadh could suffer over the affair.

Yesterday, Turkish President Recep Tayyip Erdogan reportedly discussed the case with King Salman over the phone, with the Turkish premier stressing the need to form a joint working group to probe the case.

US President Donald Trump also announced on Twitter earlier today that after speaking to King Salman, Washington will be sending US Secretary of State Mike Pompeo to meet with the Royal family and work more closely on the case.

Just spoke to the King of Saudi Arabia who denies any knowledge of whatever may have happened "to our Saudi Arabian citizen." He said that they are working closely with Turkey to find answer. I am immediately sending our Secretary of State to meet with King!

Meanwhile in the kingdom, the Public Prosecution Office reiterated over the weekend that sharing or spreading rumours or fake news that might disrupt "public order" is considered cybercrime punishable by up to five years in prison and an $800,000 fine.

Read: The Khashoggi case leads to calls for the 'Vaticanisation' of Makkah and Madinah