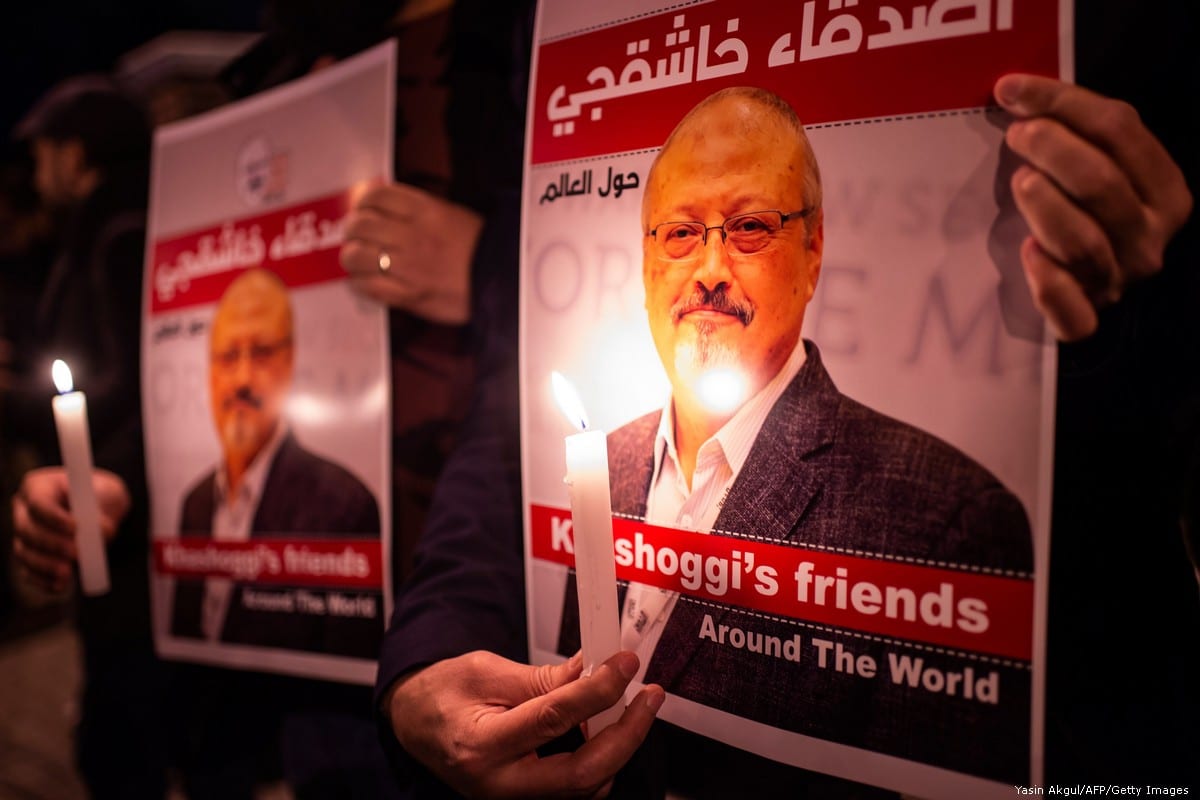 A candle light vigil to remember journalist Jamal Khashoggi outside the Saudi Arabia consulate on 25 October 2018 in Istanbul, Turkey [Chris McGrath/Getty Images]
November 26, 2018 at 3:41 am

Nearly 100 Egyptian journalists have announced their rejection of the visit of Saudi Crown Prince Mohammad bin Salman to Cairo.

The Egyptian journalists said in a statement that they refuse to receive Saudi Crown Prince Mohammad bin Salman in Egypt for humanitarian, professional, union, and national reasons.

"The Saudi regime is violating human values, especially the right to live, both for its citizens and for Egyptians and non-Egyptians working in the Kingdom," the journalists added.

They stressed that: "Saudi Arabia is a country that is not governed by the law and does not have a credible and independent judicial system in its principles of justice. It uses Islam and Sharia to curb the freedoms and rights and to justify committing atrocities against fundamental human rights. It also encourages the violation of these values by supporting corrupt, despotic regimes inside and outside the region."

Regarding the professional reasons for their rejection of the Saudi Crown Prince's visit, the journalists explained that: "The horrifying assassination of their colleague journalist Jamal Khashoggi in the Kingdom's consulate in Istanbul on October 2 represents a clear and complete crime that the Saudi regime is fully responsible for committing it from beginning to end."

The journalists pointed out that: "The attempts of Bin Salman and the royal family to evade responsibility requires journalists in Egypt and around the world to condemn this regime, on top of which the king and his crown prince, and putting them on top of the list of the enemies of freedom of expression and journalism in the world."

The signatory journalists to the statement continued: "If the media and newspapers in Egypt are subject to unfair restrictions and the abhorrent control of an authority that in its turn does not respect freedoms, the rights of readers and viewers, and journalism ethics, there are many Egyptian journalists who will raise their voices against all these violations, and even crimes, in Saudi Arabia, Egypt, and other countries."

The journalists also criticised in their statement the "silence of the Egyptian Syndicate of Journalists about the visit of the first accused person in the horrendous assassination of a colleague journalist and attempts to cover it with a visit to Egypt."

As for the national reasons, the Egyptian journalists explained that: "It was not a coincidence or a slip of a tongue that US President Donald Trump indicated in his defence on the crimes of the House of Saud, especially Mohammad bin Salman, that without Saudi Arabia, Israel would have been in great trouble."

The journalists added: "It is also not a coincidence that the Israeli Prime Minister, the criminal of the war against the Palestinians and the Arabs, Benjamin Netanyahu, is defending Mohammad bin Salman and his crimes in such a way."