Christian Arabs should be given a greater role in Palestinian advocacy 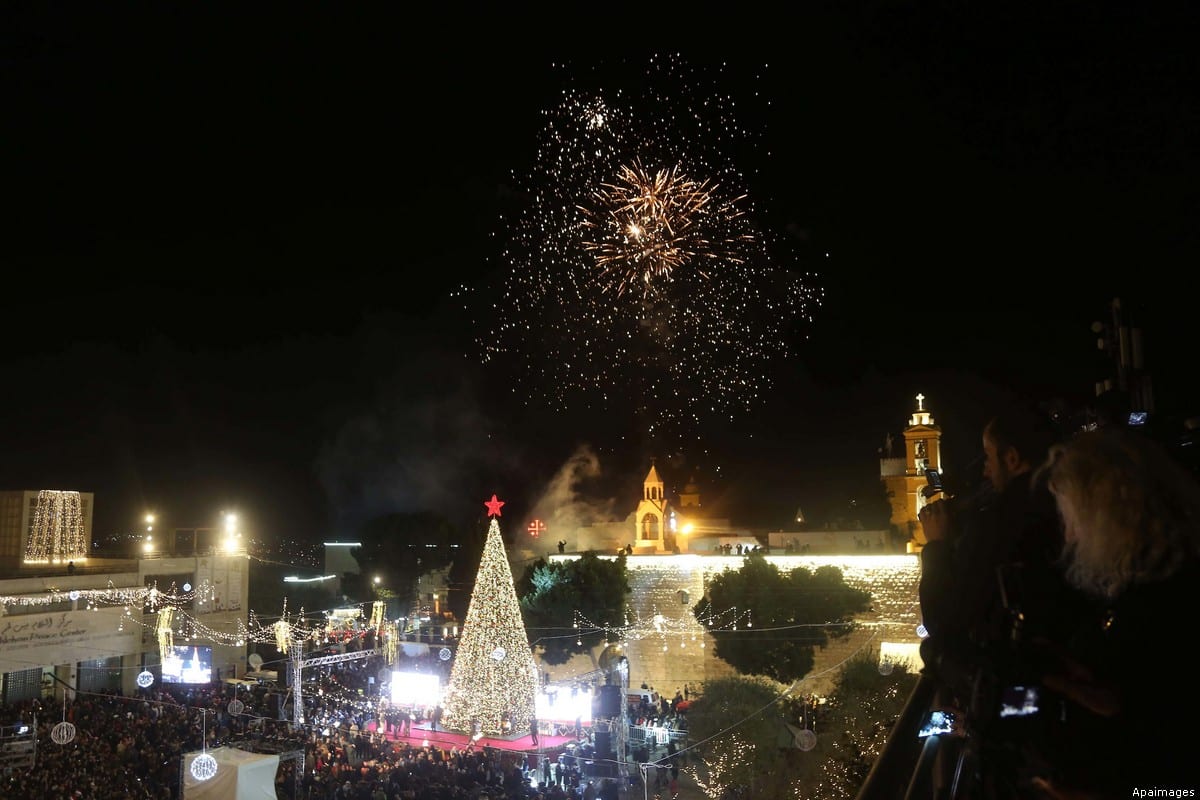 Palestinian Christians watch as fireworks light the sky to mark the lighting of the Christmas tree, in the biblical West Bank town of Bethlehem on 1 December 2018 [Ahmad Arouri/Apaimages]

The Arab and Muslim worlds are not doing enough to include Christian Arabs in their activism. Too often, the latter —whose numbers have been dwindling rapidly in the Middle East — are marginalised, patronised or simply ignored.

Although Christians are often invited to speak at major conferences organised to address the challenges of Israel's military occupation of Palestine and oppressive presence in the region, their specific concerns as Christian Arabs are rarely addressed.

Christian Arabs are critical to the fight for justice and civil rights not just in Israel but in the Arab world, and yet their role is minimal. They are the religious link between Judaism and Islam and while Biblical prophets are respected by both of the other faith groups, no effort has been made to engage Christian Arabs formally as stakeholders in the efforts for peace and justice.

This has to change.

Sadly, when the issue of Christian Arabs is raised, those advocating their greater involvement often take offence. They respond by arguing that Christians and Muslims are "brothers and sisters" who suffer equally under Israeli oppression and Apartheid. They also argue that singling out Christian Arabs is "divisive" and that the fight for justice should be a collaboration that doesn't elevate one over the other.

The reality, though, is that there is such an elevation. Last weekend, American Muslims for Palestine hosted aconvention in Chicago attracting huge crowds. While there were one or two Christian activists listed as speakers, their voices were muted by the overwhelming focus on the Islamic nature of the struggle against Israel.

I think it is great that there is a strong Muslim advocacy group in America, where activists need to put more effort into arguing the case for Palestinian rights more than in most other countries. I wonder what the reaction would be if we were to launch a group called "American Christians for Palestine".

Although some insist any discussion that separately spotlights Christians and Muslims only serves to undermine the Palestinian cause – I disagree, by the way – that argument is never made when groups leading the fight for Palestine gather under the Islamic or Muslim banner.

Personally, I think that instead of identifying either as Muslims for Palestine or Christians for Palestine, we should instead organise under the more powerful banner of "Arabs for Palestine". The subtle separation of Christians and Muslims at events has weakened our base and raised religious issues that need not be faced.

The fight to restore Palestine is a core value of the Middle East and the Arab world and the latter should be at the forefront of every discussion, every conference and every effort to confront Israel's ongoing violence and human rights atrocities. Unfortunately, the word "Arab" has lost much of its glow in the wake of more influential drives by Muslims and Christians.

I'm not sure if we can return the issue of Palestinian rights to an "Arab cause". The growth of religious empowerment has weakened the Arab secular and national drive. 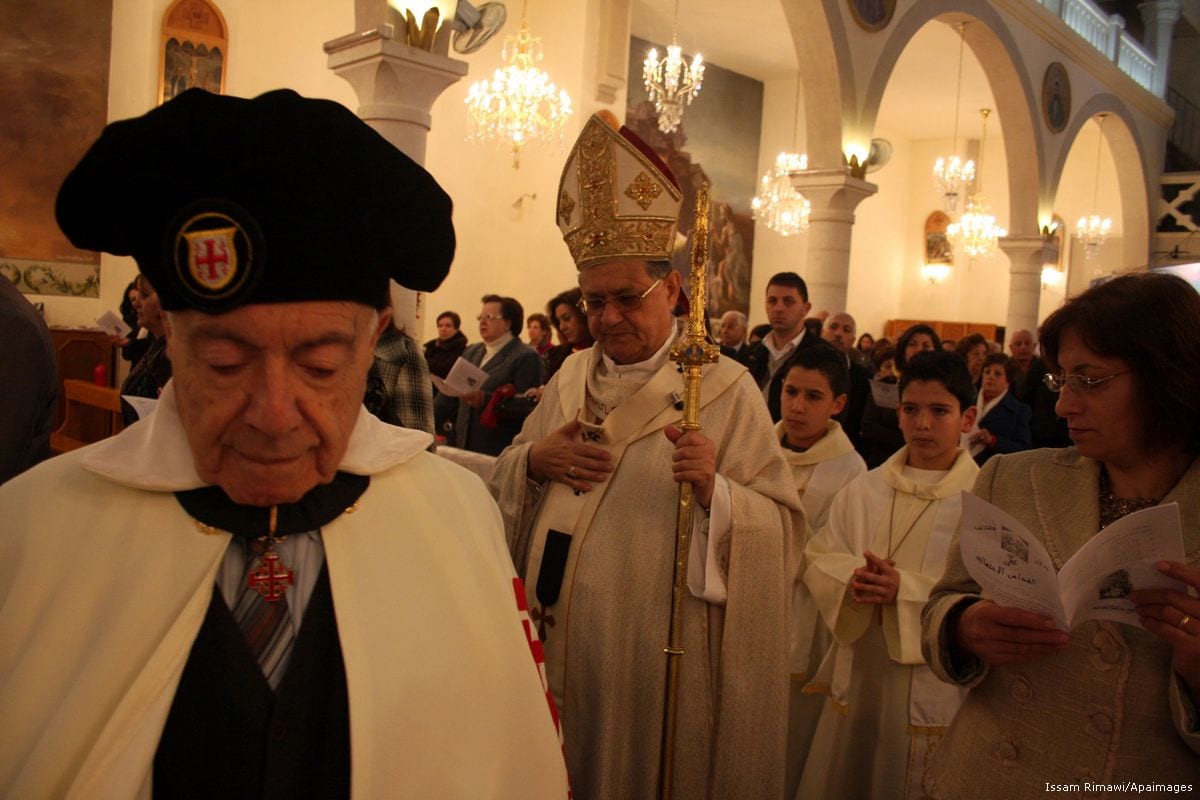 In part, because the Palestinian cause is often viewed by American audiences as being a Muslim or Islamic struggle, the fight for Palestine has lost one major asset: the American people are predominantly Christian and human nature has people identifying with their own kind. That means that Christian Arab advocates for Palestinian justice should rightly be leading the effort to better educate Americans and the "Christian world" about Israel's discriminatory policies. Instead, we have seen US Christian movements like the Evangelicals support Israel while failing to recognise the Christian aspect of Palestinian suffering. Meanwhile, non-Evangelical, mainstream American Christians aredisenfranchised from identifying with the suffering of Christian Palestinians, who would serve as a bridge to understanding the suffering of all Palestinians, including Muslims.

Israel, on the other hand, recognises this issue and lobbies Christians actively not only in the West but also around the world. It argues in its propaganda that Israelis, not the Arab or Muslim worlds, have the best interests of Christians at heart. It's a lie of course, because Israel discriminates against all non-Jews, especially against Muslim Arabs and Christian Arabs; and yet the Arab world has allowed Israel to create a false perception that it, and not the Arabs or even the Palestinians, care about the Christians and their specific interests.

This has grave consequences for the Palestinian cause in America where most US Christians sympathise not with the suffering of their Christian Arab brethren but with the Israelis, in the belief that only Israel cares about protecting Christian interests.

As a Christian Palestinian whose family originates from Jerusalem and Bethlehem I can say without hesitation that Israel is actively engaged not only in oppressing Muslim Arabs but also Christian Arabs. My relatives are Israelicitizens and victims of Israel's occupation of East Jerusalem and the West Bank. Nevertheless, American Christians question such a scenario; they listen to Israel more than they listen to the pleas of Christian Arabs.

It is time that the Arab and Muslim world engaged in an open and honest discussion about the role that Christian Arabs can and must play in advocating for Palestinian rights. A Christian Arab would definitely carry more weight in speaking toChristian Americans than a Muslim Arab would. That's not to demean the equal status that Christian and Muslim Arabsshare. It's just a reality that we can't ignore because some feel the topic is too sensitive.

As a Christian, I often feel left out of the movement to save Palestine, marginalised and excluded. That's a new experience that contrasts the reality of the Palestinian and Arab movement that existed in the 1970s and 1980s when we never used the words "Muslim" or "Christian" to address our cause.

We can't allow the fight for Palestine to become a religious battle. That's how Israel wants it to look. Arabs need to become either more active in recruiting Christian Arab voices to address the concerns of Christian Arabs or we need to adjust our lexicon to eliminate any reference to religion in this important struggle.

Christians and Muslims suffer equally. Let's treat them equally and let's end the subtle, unspoken discrimination that has been muting the unique contribution that Christian Arabs can bring to the fight for justice in Palestine.