New details pertaining to Netanyahu's alleged involvement in Case 3000 emerged last month, after Israel's State Comptroller's Office found that he had bought shares in Texas-based steel factory SeaDrift. SeaDrift was a long-time supplier of German shipbuilding firm ThyssenKrupp, which lies at the heart of the scandal sometimes known as the "submarine affair".

SeaDrift was owned by Netanyahu's cousin, Nathan Milikowsky, who allegedly sold shares to Netanyahu at a 95 per cent discount, allowing him to make millions of dollars in personal profit.

Yet according to an exclusive report by the Huffington Post yesterday, Netanyahu may have also profited from a deal which Milikowsky's other company, C/G Electrodes, held with Gaddafi's Libya. The Huffington Post claims it "has learned that while Netanyahu held Seadrift's stock, another company owned by Milikowsky, C/G Electrodes, was charged by the U.S. Department of Commerce with selling electrodes to Muammar Gaddafi's Libya in 2007 and 2008, in violation of U.S. nuclear nonproliferation regulations."

The report continues: "During that time, Seadrift Coke was the main supplier of raw materials to C/G Electrodes, which means that Netanyahu likely benefited from the Libya sales." Netanyahu's profit could have been substantial, given that C/G Electrodes' shipments to Libya were "valued at $6.8 million." 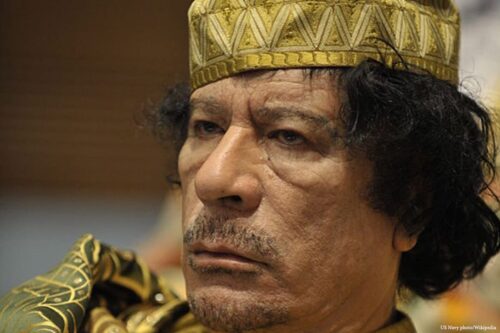 Both Milikowsky and Netanyahu have denied that the Israeli prime minister had any knowledge of the Libya connection. Milikowsky told the Huffington Post that Netanyahu "was not involved in that company [C/G Electrodes] and was just a passive investor in Seadrift," adding: "Besides that, I won't say anything else, since I'm not talking to reporters."

A spokesman for Netanyahu reiterated Milikowsky's claim that the prime minister was only a passive investor in SeaDrift, stressing "he did not take any part in the company's management or business".

The Huffington Post's revelations will add to the quickly-escalating scandal surrounding Netanyahu's links with SeaDrift and its potential implications for the Case 3000 investigation.

There are four components to Case 3000, three of which refer to deals under which the Israeli Navy would purchase submarines and warships from German shipbuilding firm ThyssenKrupp. In relation to these deals Miki Ganor, a former ThyssenKrupp sales representative in Israel, admitted to bribing a string of senior Israeli officials in order to help secure the contracts.

In the fourth component of Case 3000, Netanyahu is believed to have authorised the sale of two German submarines to Egypt without consulting the Defence Ministry or then Defence Minister Moshe Ya'alon. Speaking recently about the affair, Netanyahu said his reasons for doing so were "state secrets".

Netanyahu was not previously a suspect in Case 3000 and was only being interviewed as a witness, providing testimony about the conduct of several of his close associates. Among these associates are Netanyahu's cousin David Shimron, who allegedly represented Miki Ganor in the ThyssenKrupp deals and promised to use his influence over the prime minister to secure the sales. Nathan Milikowsky is also under investigation, as well as Netanyahu's former bureau chief David Sharan, former head of the Israeli Navy Eliezer Marom and former government minister Eliezer Sandberg.

Commentators have speculated that the resurfacing of Case 3000 could negatively impact Netanyahu's re-election bid in the upcoming general election on 9 April. Yet with less than a week to go until the country goes to the polls, the Huffington Post's latest revelation is unlikely to impact voter's decision.

However, the new details could result in an investigation into Netanyahu's involvement in the submarine affair and the profit he gained from SeaDrift. The scandal has rocked the country, with former security officials calling it "the most significant corruption scandal Israel has known". Given that Netanyahu is already due to appear in court as part of the Case 1000, 2000 and 4000 investigations, should he be re-elected next week allegations of corruption promise to be a key feature of his first few months in office.