Macron and the weak return of French colonialists 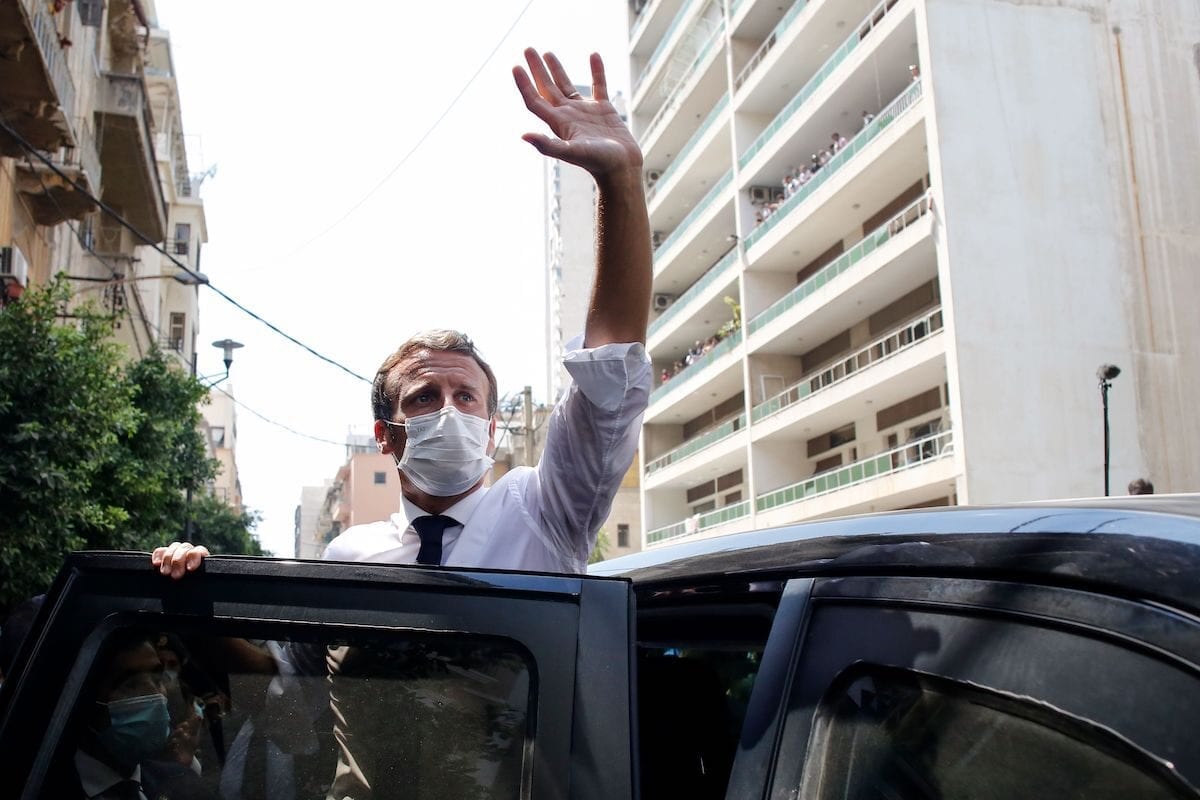 French President Emmanuel Macron waves from his vehicle during a visit in Beirut, Lebanon, on 6 August 2020 a day after a massive explosion devastated the Lebanese capital in a disaster that has sparked grief and fury. [THIBAULT CAMUS/POOL/AFP via Getty Images]

French colonialists have returned to Lebanon, with President Emmanuel Macron wanting to restore the colonial "glory" of his predecessors in the region who tortured the people and looted their wealth and resources. Macron went to Lebanon last month as a new conqueror, on the centenary of the establishment of "Greater Lebanon" by France, in order to flex his muscles in the face of its leaders by commanding and threatening them.

Everyone gathered in the Pine Residence, where the state of Greater Lebanon was declared. He sat in front, alongside Lebanon's president, prime minister and speaker of the parliament, along with factional leaders, including Hezbollah. They all listened and nodded their heads as the French president ordered the immediate formation of a government and reforms in the banking system. He then threatened that they will not receive any funds or moral and material support until such reforms have been implemented and rampant corruption is ended. He warned the heads of the various sects about financial sanctions, and said that he would return in three months to monitor their progress.

This was the elected head of the French government, remember, who then walked around the streets of Beirut with arrogance. French, not Lebanese, security personnel escorted him, after President Michel Aoun left Macron to inspect the post-explosion devastation at the port alone, as if Lebanon is a province of France.

It is both ironic and sad that the Arabs have become so weak that Macron appeared in Lebanon as the saviour who everyone fears, when in reality he is also a weak failure in his native France. However, he wants to make up for this by using Lebanon as a precious catch that will impress his people, to boost his declining popularity. He is afraid that he will not be re-elected following the rise of his left-wing opponents supported by the Yellow Vests movement. Like others before him, in order to divert attention from his domestic crisis he sought to look strong overseas.

Hands off Lebanon: Macron's self-serving 'New Pact' must be shunned

With his second recent visit to Lebanon last week, Macron wanted to enter the country on the basis of culture and art, so he began at the home of the veteran singer Fairouz, to whom he presented the Legion of Honour, France's highest award, as proof of his country's appreciation of art and artists. This was the approach adopted by former President Nicolas Sarkozy when he visited Lebanon in 2008 with Lebanese novelist and francophone Amin Maalouf in his entourage so that he could flatter the cultural icon.

Before leaving, Macron planted a pine tree to celebrate the 100th anniversary of the declaration of Greater Lebanon, while French fighter jets flew over Beirut, releasing the colours of the Lebanese flag in smoke trails behind them.

All of this serves France's vital interests in the region. It has had a colonial project in the Middle East since the rule of Napoleon Bonaparte. Now it communicates new colonial machinations, with Macron as their main figure. 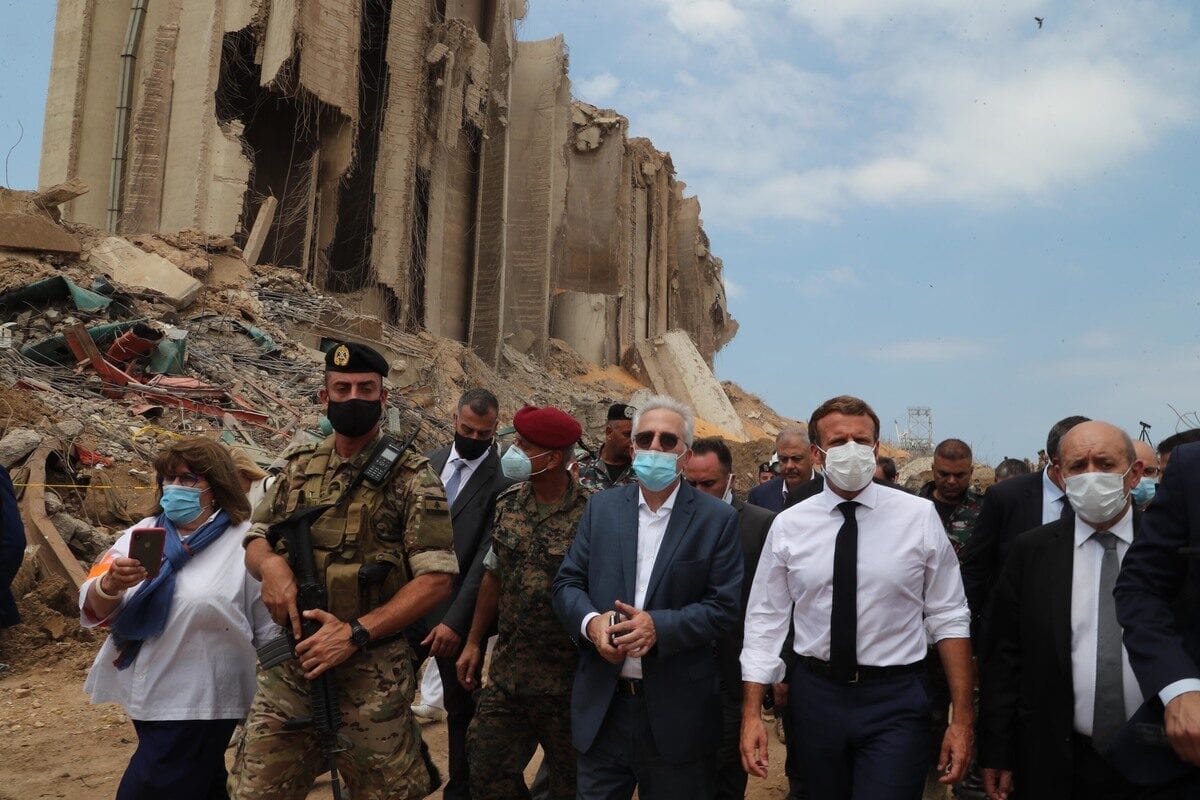 French President Emmanuel Macron inspects the site after a fire at a warehouse with explosives at the Port of Beirut led to massive blasts in Beirut, Lebanon on 6 August 2020. [LEBANESE PRESIDENCY / HANDOUT – Anadolu Agency]

The French president employed right-wing and popular religious rhetoric whilst in Lebanon, and issued controversial statements provoking the Muslim world, refusing to condemn Charlie Hebdo's re-publishing of cartoons considered offensive to Muslims across the world, not least in France, where they make up 13 per cent of the population. Macron appeared not to be bothered by Islamophobia and the hostility towards a large proportion of his country's citizens, and has not bothered to draft a new French social contract that respects the rights of the Muslim minority in France and criminalises anti-Muslim behaviour, as he did with anti-Semitism. Instead, he escaped from the burdens back home during the coronavirus pandemic by directing advice and promises to Lebanon, while threatening to deprive its people of aid and support in international forums if they do not formulate a new charter and social contract.

Greater Lebanon came into being on 1 September, 1920 when the French High Commissioner, Henri Gouraud, announced its establishment to differentiate it from the Mount Lebanon Mutasarrifate, established by the Ottomans in consensus with six European countries in 1864. The expansion of "smaller Lebanon" was achieved by annexing the state of Beirut, along with the northern areas of Tripoli and Akkar, the southern areas of Saida and Sur, as well as Hasbaya, Rachaiya and Baalbek, which were a part of the state of Damascus at that time. They were all annexed to Mount Lebanon to make up Greater Lebanon.

READ: Is there a new 'Sykes-Picot' race unfolding to shape Lebanon's future?

This was not a state as much as it was an entity, in the sense of a legal and administrative framework for a political system that is the fruit of three factors: the Ottoman millet system and Crusader feudalism as found within Lebanese geography, which embraced sects and groups that were affected by one or both of these systems. Hence, we can say that working for the establishment of a Lebanese entity was not a struggle to bring together the parts of a fragmented country, as there was no country in the historical, geographical or civilisational sense. The work towards the Lebanese entity was a great effort to establish the Lebanese government by extending it to the borders where its social and political background ended.

The return of France, represented by Macron, to the Arab Mashreq looks weak; it is unlikely to regain the status it lost in Africa. Instead, it is viewed as hostile by the people, who see it as an occupying power trying desperately to turn back the clock. Macron's real concerns are domestic matters that cost him his political balance and diplomatic edge in Lebanon and Iraq. He has turned into a populist president, close to the far right, which is rejected in most Middle East countries, and has thus become a problematic figure not only in the region, but also in France itself.