Even Egyptians in rural areas are protesting again 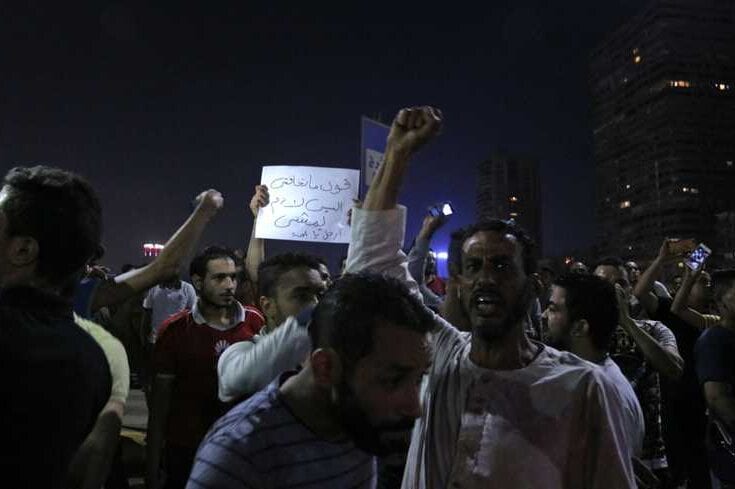 A number of Egyptian villages experienced public demonstrations in the period that followed the army's takeover in July 2013. However, the tight security grip and subsequent brutal persecution of some of the villagers often resulted in bringing the protests to an end.

The sudden resumption of protests last week were a means to overcome the deployment of army vehicles across urban squares in a pre-emptive bid to stop them. What has even been more exciting is that in many rural areas demonstrations have been held for six consecutive nights despite the tear gas and shots fired by the police.

News programmes on TV and social media revealed the real picture of jilbab-wearing Egyptians, mostly young and perhaps still in their teens, in a clear manifestation of the failure of the state-owned media to dissuade them from their protests or intimidate them. It wasn't just the call made by an Egyptian contractor living broad that provoked them to take to the streets and keep on demonstrating, even though many young men and women were being arrested in various places. In fact, it was their difficult living conditions which were the major motivation for them to go out and protest.

Building licences have been banned for six months, and the construction industry employs about five million people, especially in southern Egypt. Many of these workers leave their homes to work in the capital cities of Lower Egypt governorates. They wait in city squares every morning in the hope of a work opportunity and then remit what they earn to their families in the governorates of Upper Egypt. As acknowledged by the Bureau of Official Statistics, these happen to be the poorest regions in the country.

READ: Al-Sisi fears 'nobody but Allah' in a state 'engaged in reform not corruption'

For example, 67 per cent of the people in the Asyut Governorate live under the poverty line of 736 Egyptian pounds. This figure is by no means realistic in light of the soaring costs of essential goods and services. The actual poverty rate must, therefore, be much higher than the aforementioned figure from the fiscal year 2017/2018, according to which the poverty rate in the Governorate of Suhag in the south of Egypt was 60 per cent, while in Luxor and Minya in the south it was 55 per cent.

Officials have admitted that those figures were modified twice after government circles objected to such rates being published as they would expose Cairo's failure to improve living conditions. Hence, the publication of poverty rates was delayed for several months. Then came the recession and the coronavirus pandemic and their impact on the economy, which collectively made the unemployment and poverty levels much worse.

Nevertheless, the regime continued to increase prices until electricity, drinking water and natural gas were beyond the overwhelming majority of families. Public transport fares also increased while the pandemic and the wars in Libya and Yemen ended the possibility of travel to neighbouring countries to look for work, especially in construction. The people of Upper Egypt are adapted to tough living conditions and high temperatures, and are strong; all ideal qualities for such work.

As usual, the regime in Cairo was not so clever. It added a number of other factors to the cost of living, which had the effect of making it worse for most people. These factors included threats to demolish houses which didn't meet building standards, which hardly exist in any rural houses, and demands for people to pay fines to the government. Most people simply cannot afford to pay such penalties, though, even after a small discount.

The regime continued to put up service costs when it levied fees on boxes accompanying rail passengers. Train travel is the most frequently used means of transport between Upper and Lower Egypt. Passengers are now charged between 12 and 140 Egyptian pounds per box depending on the weight and the distance travelled. Moreover, the Ministry of Social Security cancelled the annual rail cards normally issued to retired government employees in Upper Egypt.

The Ministry of Education has also increased school fees across all educational stages to three times what they were in the previous year. This was done despite announcing that schools would only be open for two days per week during this new academic year.

The government's decision to sign a thirty year contract on 4 September with the army-owned Egyptian Mining and Quarries Use Company has damaged quarrying companies in Upper Egypt as well as the people they employ. These companies were already struggling due to the halt in construction over the past six months.

Reports that the government has been demolishing mosques under the pretext that they were built on state land, while leaving buildings alone which belong to the Ministry of the Interior despite similar land issues, have exacerbated the situation in Egypt. Images of house demolitions on TV, and the threats made by the regime head to use the army to demolish houses in "violating" villages have inured the people living in rural areas to living under martial law since 2013 which bans demonstrations and imposes punishments such as prison and fines ranging from 5,000 to 30,000 Egyptian pounds. The people are no longer intimidated, not even by a 2017 "emergency law" that is renewed every three months and which grants state prosecutors the power to use the courts against anyone who takes part in protests and obstructs traffic.

Where are all of these things leading Egypt? The 20 September demonstrations have been followed by many arrests. The government postponed some new taxes and fees until things calmed down, but now it is business as usual. Such a tactic is expected from this regime.

However, its opponents this time are not political activists; they are the ordinary people who have nothing more to lose. They live all over the governorates of Upper Egypt where people are traditionally armed generation after generation; you can hardly find a house that has no guns inside. This means that the government needs to act with caution and wisdom in how it deals with these people who are accustomed to acts of revenge, no matter how long it takes.

Senior police officers will no doubt recall that during the Mubarak era, they used to bring the mother, wife or sister of recalcitrant men in Upper Egypt to the police station in order to compel them to hand themselves in. That was perceived as a grave insult, for which individuals would lie low to avenge their honour, even if this took years, and wherever that police officer happened to be and no matter how high his rank became.

The situation in Egypt is hot and it likely to remain so for some time. This much has been acknowledged by the regime's media outlets. Furthermore, the spontaneous protests by unsophisticated Egyptians in rural areas has motivated exiles in many European capitals to resume their demonstrations against the Cairo regime and remind the media and people in their host countries how oppressive the regime is, a fact about which European governments have been saying very little.

This article first appeared in Arabic on Arabi21, 27 September 2020