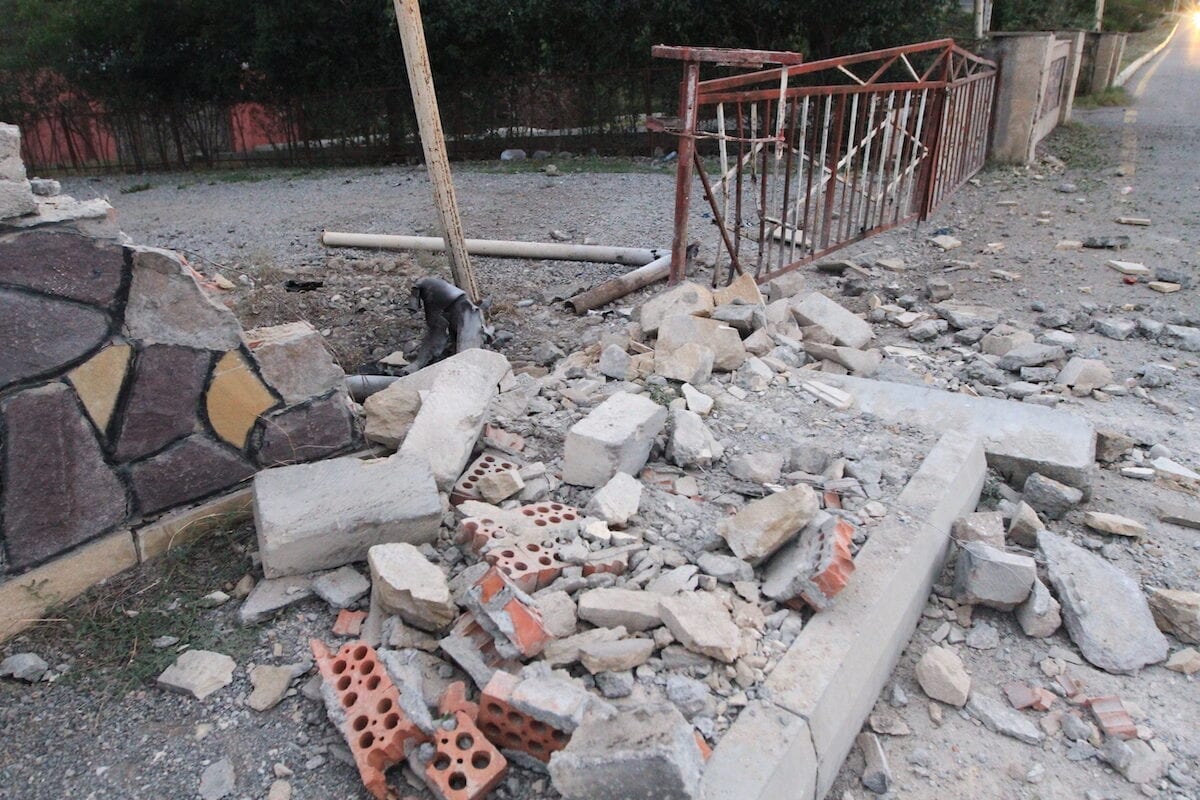 A view of debris of a demolished wall is seen after allegedly it was being targeted by Armenian forces as the clashes between Armenian and Azerbaijan forces continue on September 28, 2020 [Resul Rehimov - Anadolu Agency]
October 29, 2020 at 6:47 pm

Azerbaijani top officials along with the heads and members of foreign diplomatic missions and international media representatives on Thursday visited the regions where civilians were recently targeted by Armenian forces, Anadolu Agency reports.

"We are on they way to Barda and Tartar to show Armenia's intentional warcrimes against innocent civilians to international media and diplomatic corps. They will see on the spot crimes of Armenia's political-military leadership," Hikmet Hajiyev, the assistant to the Azerbaijani president, said on Twitter.

He also thanked the diplomatic corps in Azerbaijan for "compassion", adding that: "As we were told by the military, Armenian side attacks outskirts of Tartar. But diplomatic corps on voluntary basis decided to go to Tartar."

Thanking the diplomats for solidarity, Hajiyev compared Tartar to "Stalingrad of Azerbaijan."

Stalingrad, now known as Volgograd, a city in southwest Russia on the western bank of the Volga River, is known for the Battle of Stalingrad — a brutal military campaign between Soviet forces and those of Nazi Germany and the Axis powers during World War II — which is believed to have turned the tide in favor of the Allied forces.

Earlier on Thursday, the Azerbaijani Defense Ministry announced that various regions, including the territory of Barda and Goranboy regions came under fire by the Armenian army.

Wednesday's deadly missile attack of the Armenian forces on Azerbaijani civilian settlements in the city center of Barda region left at least 21 people dead, including five women, and wounded 70 people — including eight children and 15 women.

The two cluster Smerch missiles, which are prohibited by international law, were fired at around 1 p.m. local time [0900GMT] targeting the densely populated area with commercial establishments in Barda, Azerbaijan's Prosecutor General's Office said in a statement.

"[Armenian Prime Minister] N.Pashinyan by cluster missile attack you wanted to intimidate innocent civilians of Barda? Barda is beautiful and strong than ever before with reinforced determination. You made your big mistake. Added one more warcrime to your file. Now we [are] going to Tartar to show your crimes," Hajiyev said in a separate tweet.

Meanwhile, Azerbaijani Defense Ministry in a statement said that the Armenian forces launched fire on the diplomatic corps in Tartar.

"On October 29 at 13:50 [0950GMT], during the visit of state officials to Tartar together with the heads of the diplomatic corps in Azerbaijan, ambassadors, military attaches and officials of international organizations in our country, the Armenian armed forces, which once again grossly violated the humanitarian ceasefire regime, deliberately fired in that direction," the ministry said, and "strongly" condemned the move.

Azerbaijan considers it an "act of aggression against the international community," the statement said.

READ: US talks with Armenia, Azerbaijan fail to reach pact