US plans to fight in Somalia for two more years

The US Pentagon has inked plans to the White House to fight in Somalia for two more years, the New York Times reported yesterday. 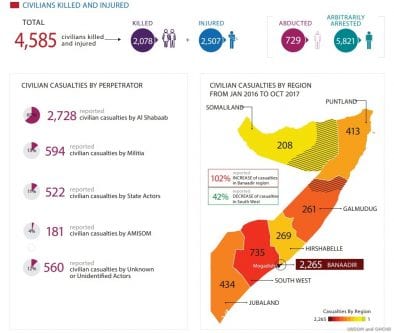 According to the blueprint, the US will conduct an internal review on Somalia within 24 months to decide whether to continue fighting in the country. The news comes off the back of an escalation in counter-terrorism drone strikes in Somalia under President Donald Trump.

The timeframe has been seen as "problematic" by some. "A tonne can happen in 24 months, particularly in the world of counter-terrorism and when we're talking about a volatile situation on the ground like we have in Somalia with government formation issues and famine issues," Luke Hartig, a senior director for counter-terrorism, said, "that's an eternity."

Trump has already provided the US military and CIA broader authority to execute strikes in Somalia, considering it an "area of active hostilities". As a result, 30 airstrikes have been executed in Somalia, with the most recent killing some 100 Somalis. Controversial raids have also taken place under Trump, with the most notable taking place in August, killing 10 civilians in southern Somalia as they ran and took cover behind banana trees. A US investigation concluded that no civilians were killed in the raid, despite human rights groups disputing the claim.

In addition to the US White House proposal, the African Union Mission in Somalia (AMISOM) is planning to rescind its footprint in Somalia, despite an escalation in fighting. The latest attack by the group Al-Shaabab killed some 300 people in the capital Mogadishu. It is uncertain why AMISOM is withdrawing some 1,000 troops by the end of the year.

A United Nations report released on Saturday documented 4,585 civilian casualties in Somalia, of which 2,078 were killed and 2,507 injured between 1 January 2016 and 14 October 2017. The report did not specifically mention the number of deaths caused by US drone strikes.

According to the Bureau of Investigative Journalism, 510 killed and 54 injured in reported strikes across Somalia since 2007.

The US is combating the Al-Qaeda affiliated Al-Shabaab group in Somalia, which is responsible for frequent attacks in densely populated areas. Al-Shaabab seeks to dislodge the government and govern over Somalia using a strict interpretation of Islamic Law.

US activity in Somalia is joined by a small regiment of 85 British troops based in southern Somalia.