Report: Corpses left rotting under rubble due to Ghouta bombardment 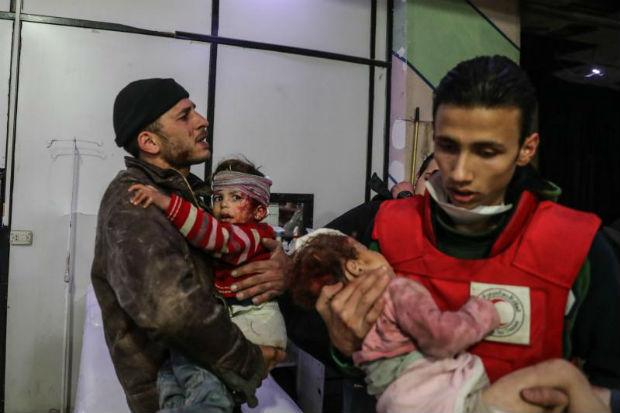 Syrians can be seen covered in blood after the Assad Regime carried out air strikes in Eastern Ghouta, Syria
September 26, 2018 at 4:10 pm

Syrian families were forced to leave corpses to rot under the rubble in Eastern Ghouta, a new report documenting the extent of the devastation in the Damascus suburb after it was recaptured by Syrian regime forces earlier this year has revealed.

The think tank Atlantic Council released the report entitled "Breaking Ghouta" yesterday, timed to coincide with the opening of the UN General Assembly. A number of organisations, including investigative outlet Bellingcat, contributed to the findings which detailed some of the most brutal results of the 49 day bombardment.

The report estimates that some 16,934 strikes were documented in eastern Ghouta – an average of 345.6 per day. The heaviest day of bombardment was found to be 21 February, with the regime of Syrian President Bashar Al-Assad launching some 1,658 attacks in 24 hours.

"Locals reported that corpses and body parts were often left rotting under the rubble and even strewn in the streets due to the danger and difficulty in retrieving them," according to the report.

"Multiple victims were buried in mass graves with merely numbers attached to their improvised shrouds, as relatives and friends were unable to reach the hospitals and morgues to identify their loved ones."

The report documented at least six instances where chemical weapons had been used, the deadliest of which was in the town of Douma on 7 April which resulted in the death of over 150 people and injured hundreds more.

Atlantic Council also note the campaign of disinformation spread by the Syrian regime about the nature of the battle in Ghouta, including the persistent demonisation of civil rescue group the White Helmets, and propaganda about chemical attacks, with Russian sources alleging that they were "false flags" perpetrated by opposition forces. 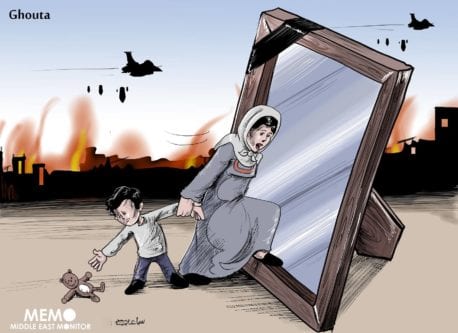 This was amplified by sympathetic media outlets and subsequently on social media. In the aftermath of the Douma attack, a scan of Twitter revealed that six of the ten most-retweeted posts between 10-16 April came from Assad supporters, out of a total of 487,000 posts. The report cites several studies that determined that the disinformation was driven by a small core of dedicated users and websites.

The report concludes that the regime's takeover of Ghouta was "the culmination of years of "kneel or starve" siege tactics, indiscriminate aerial bombardment, cynical manipulation of truce and ceaseﬁre, and the likely use of chemical weapons against population zones."

Amnesty International has previously stated that the Syrian government's strategy of "surrender or starve" towards civilian populations in opposition controlled areas amounts to a crime against humanity. Ghouta had been suffering from a tightening of the blockade imposed since 2013, after a previous offensive by the Syrian regime cut underground smuggling routes that formerly allowed civilians access to food, fuel and medicine.

The UN and international community condemned the campaign against the Damascus suburb, which had been designated as one of the four de-escalation zones established last year by Russia, Iran and Turkey. The Syrian regime, backed by Russian airpower, has since fired on all the opposition territories in violation of the agreement.

The northeastern province of Idlib remains the last opposition stronghold in the country, with fears rising earlier this month that the government would launch a largescale attack, endangering the three million civilians taking shelter there. However, a deal between Russian and Turkish Presidents Vladimir Putin and Recep Tayyip Erdogan revealed last week indicated that the attack had been averted in favour of the establishment of a de-militarised zone.