Christians in Jerusalem warn of Israel attempts to take their land

Palestinian Christians living in occupied Jerusalem are fighting back against Israeli attempts to take away their land. Their struggle to remain in the historic city was raised by Christian Today in a report today where the non-denominational Christian news agency said that "Christians in Jerusalem are warning of another attempt by Israeli parliamentarians to take land they own".

Israeli lawmakers have made repeated attempts to confiscate or nationalise church-owned lands. The latest threat against the Christian community was made before Christmas; it is thought to be the fifth occasion on which factions within the governing coalition sought to impose legislation which would allow the expropriation of Church lands.

Previous attempts to impose the so-called "Tenants' Rights Bill", said Christian Today,  received worldwide condemnation and even led to the temporary closure of the Church of the Holy Sepulchre in the Old City – the historic site of Jesus' crucifixion and resurrection.

The Patriarch of Jerusalem, Theophilos III, who is the most senior Orthodox Christian leader in the region, has been highly critical of attempts to confiscate land from his and other churches. He has toured the USA and EU countries to lobby against the Israeli bill, which members of the right-wing coalition are trying to push through within the Israeli Knesset.

The legislation has been repeatedly criticised around the world with politicians in London and Washington expressing unease. During the Patriarch of Jerusalem's visit to the UK, Prime Minister Theresa May was asked about the wider prospects for Christians in the Holy Land. According to Christian Today, she even expressed her concern in the House of Commons, telling British lawmakers: "We certainly encourage the Israeli government to do all they can to uphold the values of equality for all enshrined in their laws… I will continue to work with governments, with the international community and with the United Nations to support the rights of minorities, including Christians."

The Archbishop of Canterbury is also said to have expressed his concern over the recurrence of proposed bills which would threaten church property in the Holy Land. In an interview with ITV Justin Welby is reported to have called on Israeli Prime Minister Benjamin Netanyahu to continue to uphold religious freedom and the rule of law: "The proposed law would have a very serious effect on the Christian churches in Jerusalem, the very place we are looking to at this time of year,'" he said. "I admire Prime Minister Netanyahu reflecting Israel's reputation for freedom of religion and belief and the rule of law. I hope he will continue to do so."

The Palestinian Christian population has fallen dramatically since the creation of Israel. Christians make up two per cent of the population of both Israel and the Palestinian territories – the number used to be around 15 per cent. In Bethlehem alone, the Christian population has slumped to 7,500 from 20,000 in 1995. While tension across the Middle East has led to Christian's fleeing parts of the Middle East, in Palestine the Israeli occupation is cited as the prime cause of emigration and the decline of the Christian community.

Two weeks ago British Foreign Secretary Jeremy Hunt ordered an independent, global review into the persecution of Christians. The unprecedented Foreign Office review will make recommendations on the practical steps the government can take to better support those under threat. As many as 200 million Christians are said to be at risk of persecution across the world, including in countries like Pakistan, China and parts of the Middle East.

It's not clear if the review will report on the persecution of Palestinian Christians living under Israeli occupation. Critics have pointed to the close relations between the UK and Israel for their scepticism over the reviews genuine concern over the plight of Christians. 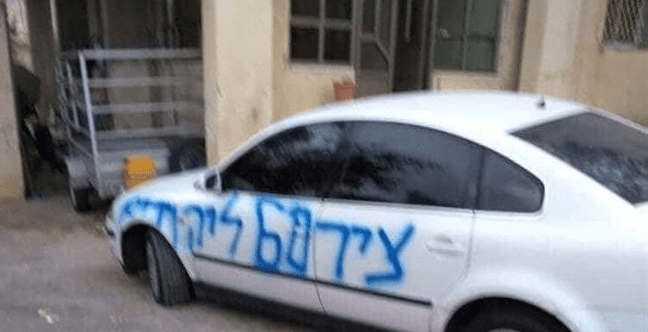 Attacks by Israeli settlers on churches and other religious sites has become a common feature in occupied Palestine. Abusive Hebrew graffiti are often found on the walls of churches, and many more are vandalised.  A group of Israeli Jewish settlers operating under the "Price Tag" label have carried out hundreds of attacks against Christian sites as well as Palestinian facilities, farms, cars, churches, mosques and homes.

Church leaders have also condemned Israel describing what they say is it's "systematic attempt to undermine the integrity of the Holy City of Jerusalem and weaken[ing] the Christian presence" in Palestine.