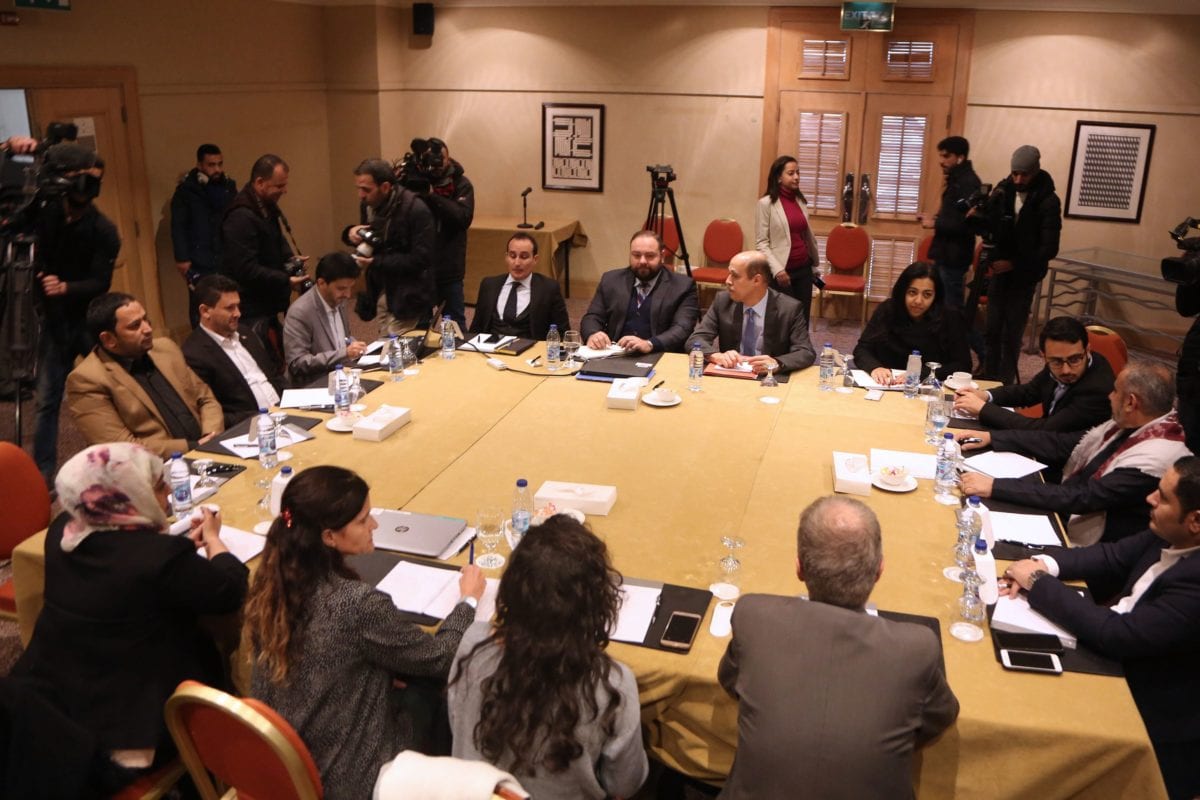 Representatives of Yemen's Huthi rebels and a Yemen government delegation meet in the Jordanian capital Amman on 17 January 2019 [KHALIL MAZRAAWI/AFP/Getty Images]
January 18, 2019 at 2:54 am

Yemen's warring parties hope to deliver final lists of prisoners to the United Nations after talks in Amman on Thursday under an exchange agreement, a government delegate said, Reuters reports.

The United Nations is pushing for the swap and a peace deal in the main port city of Hudaydah to pave the way for a second round of talks to end the nearly four-year war that has killed tens of thousands of people.

While there is progress on the prisoners, the United Nations has struggled to implement a troop withdrawal from Hudaydah, a lifeline for millions, amid mistrust among all sides.

The Iranian-aligned Houthi movement and the Saudi-backed government on Dec. 11 exchanged lists of around 15,000 prisoners. They must submit written remarks on lists provided by the other side, respond and sign the final versions before handing them to the United Nations and the Red Cross which would oversee the exchange.

"We are at the stage of remarks but there are some gaps that are now being addressed," the head of the government delegation, Hadi Haig, told Reuters.

Muin Shreim, deputy to the UN special envoy to Yemen, said the technical meeting had a "positive atmosphere".

The swap was one of the least contentious confidence-building measures at last month's UN-sponsored peace talks in Sweden, held amid Western pressure to end the conflict that has left 15.9 million people facing severe hunger.

Abdul Qader Murtada, who headed the Houthi delegation, said they agreed to hold another round of talks to resolve issues that were holding back implementing the deal. He did not specify when that could take place.

The war pits the Houthis against Yemeni forces backed by the Sunni Muslim coalition trying to restore the government of Abd-Rabbu Mansour Hadi, ousted from the capital Sanaa in 2014.

Hudaydah, currently held by the Houthis with thousands of coalition forces massed on the outskirts, became the focus of the war last year, raising fears that a full-scale assault could cut off supply lines and lead to mass starvation.

The UN Security Council approved on Wednesday the deployment of up to 75 observers to the Red Sea city, the entry point for the bulk of Yemen's commercial imports and aid, to monitor a truce and troop withdrawal by both sides.

The ceasefire has held but the troop withdrawal has stalled over differences on who would control Hudaydah. Frontlines have not shifted and the main road from the port to Sanaa remains blocked, hampering distribution of goods to northern Yemen.

The conflict is seen as a proxy war between Saudi Arabia and Iran. The Houthis say their revolution is against corruption.