Today more than ever Morocco is at the centre of political and economic interests. It's not surprising, then, that art institutions all around the world are paying increasing attention to emerging Moroccan artists. These contemporary practitioners are indeed moving in the footstep of a boundless cultural tradition, while also incorporating the fears, hopes and desires for the future of the whole country.

European galleries in particular are not missing the opportunity to let these artists take over their spaces. Enter the Young Moroccan Artists, a group of young talents identified recently by London's Sulger-Buel Gallery through their new exhibition. The show aims to foster a young, contemporary Moroccan art scene displaying the work of artists of the same generation. Working in different media and concepts, their practices are closely tied to their environment, which is at one both peculiarly African and global.

A demonstration of Europe's interest in Morocco is that while the exhibition starts in London this month, it will then be transported to the KFW-DEG Bank in Cologne in June as part of its cultural programme, which has Morocco as the featured country this year.

In the definition "Young Moroccan Artists", there is a clear reference to a very recent art history. The "Young British Artists" were a group who gave the expression "èpaner the bourgeois" a whole new meaning. In the beginning of the '90s — right when we thought that nothing could shock the art public anymore – a young Damien Hirst put an entire shark frozen in formalin in a gallery. Called "The Physical Impossibility of Death in the Mind of Someone Living", it stirred the art scene and beyond. A few years later, Tracy Emin created "My Bed", consisting of her bed with bedroom objects in an abject state, with clear traces of lovemaking. The work gained much media attention while winning many prestigious art prizes.

Are the Young Moroccan Artists bringing forth a similar shock value? Not necessarily. More than shocking, these artists are denouncing pressing concerns, almost always related to consumerism, whereas most of the Young British Artists basked in the unclear boundaries between art and the market.

An example to be found in the Sulger-Buel Gallery show, is the universe that artist Ben Krich brings forwards. Absurd, tragic and comical at once, it is populated by wingless, headless hens. His drawings and sculptures are indeed a satire of a society which is neither intentioned to fly high nor to think ideas through any more, but it is today only propelled by market forces. We find a similar concern for an excessive materialist vision of society in Rachid Ouhnni's work. Raised in the medina of Marrakech, his works are inspired by the opulent materials and linguistic culture of his immediate surroundings.

We can see also more direct political innuendos. Madiha Sebbani is a multidisciplinary artist and curator hailing from a military family. She articulates a sharp critique of the notions of authority and hierarchy, and she represents power structures through the use of costume.

Faced with such an interesting show putting the spotlight on Moroccan contemporary art, it is interesting to see if Europe's interest is reciprocated in Morocco itself. Surprisingly, the country's intelligentsia seem to be determined to emancipate themselves from a Western-centric vision of the art world, creating their own value system. This is achieved by strengthening their relationship with Africa rather than Europe.

This comes across in a clear way through the first museum for contemporary art in Marrakesh, the MACAAL: the Museum of African Contemporary Art Al Maaden. Soft-launching to locals in 2016, the museum officially opened in February last year. This private enterprise has brought some fresh air and interesting new actors onto the local art scene. Focusing on artists from Africa and the diaspora, the space exemplifies the opening of the country to the so-called "new geographies of contemporary art".

The museum opened with the show "Africa Is No Island", a group photography show comprising of 40 artists working on the continent, as well as in the wider context of African culture. The MACAAL aims to bring back the African voice in Morocco, in a way that is free and neutral. This is something that seems to be lacking at the moment, but is in the process of being built.

As it is, in many of these "new geographies", the real contemporary art rulers are the collectors, the only people able to counter government policies that can be restrictive when, and if, they concede funding. This is the case also with the MACAAL, which was started by Moroccan art collectors and father-and-son duo Alami Lazraq and Othman Lazraq. The museum hosts the family's private collection of contemporary African art, which has been curated over the past 40 years. 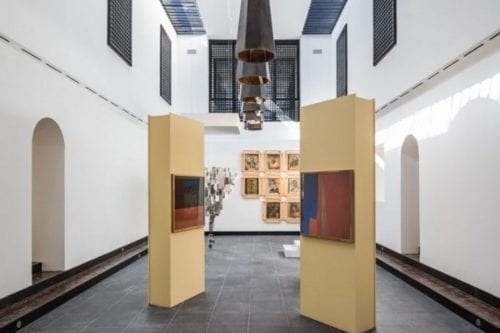 The winning formula here is creating a "human scale museum", co-existing with an international breadth and the openness to have global audiences learn about Morocco and Africa. "We're trying to give a voice to young, emerging and established artists," said Othman Lazraq, "to be proud of their roots in their continent and not abroad."

In that, we can see how this aligns with the Young Moroccan Artists. It is from this intention, it seems, that a true Moroccan contemporary art renaissance can begin.