Iraq: US has no plan to evacuate embassy in Baghdad 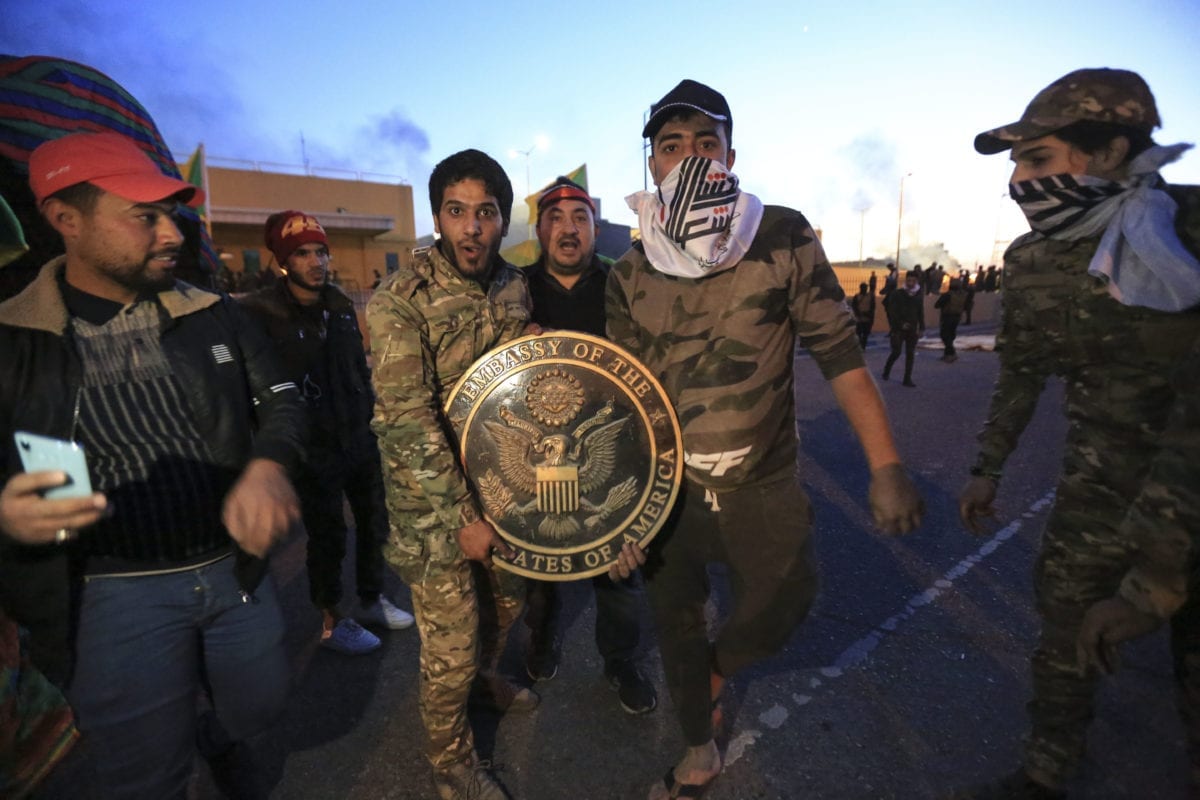 Outraged Iraqi protesters pose for a photo with US Embassy plaque as they storm the US Embassy in Baghdad, protesting Washington's attacks on armed battalions belong to Iranian-backed Hashd al-Shaabi forces on 31 December, 2019 [Murtadha Sudani/Anadolu Agency]
December 31, 2019 at 6:34 pm

The United States has no plans to evacuate its embassy in Baghdad and additional forces are being sent following violent demonstrations outside the compound by protesters and militia fighters enraged by American airstrikes, US officials said on Tuesday, reports Reuters.

US President Donald Trump blamed Iran for "orchestrating" the attack on the US embassy in Baghdad and said he would hold Tehran responsible.

"US personnel are secure and there has been no breach. There are no plans to evacuate Embassy Baghdad," a State Department spokesperson said.

The spokesperson added that the US Ambassador to Iraq Matt Tueller had been on previously scheduled personal travel and was returning to the embassy.

Earlier on Tuesday, Iraqi officials said the ambassador and other staff were evacuated from the embassy for their safety.

READ: Iran denies involvement in targeting US forces in Iraq

US Defense Secretary Mark Esper said additional forces were being sent to the embassy.

Esper called on the Iraqi government to help in protecting US personnel in the country as it was part of Baghdad's "international responsibilities."

US officials, speaking on condition of anonymity, told Reuters that a small number of additional Marines were expected to go to the embassy in Baghdad.

One official said they were expected to number in the dozens and would be there temporarily.

Another official said two Apache helicopters carried out a "show of force" over the embassy.

The US military carried out the strikes on Sunday against the Iran-backed Kataib Hezbollah militia group in response to the killing of a US civilian contractor in a rocket attack on an Iraqi military base.

Iran killed an American contractor, wounding many. We strongly responded, and always will. Now Iran is orchestrating an attack on the US Embassy in Iraq. They will be held fully responsible. In addition, we expect Iraq to use its forces to protect the Embassy, and so notified,

To those many millions of people in Iraq who want freedom and who don't want to be dominated and controlled by Iran, this is your time!

On Monday, State Department officials said Washington had exhibited restraint and patience in the face of escalating provocations from Iran or Iranian-backed groups, but that it was time to re-establish deterrence against Iranian aggression.

READ: After air strikes, US officials concerned about retaliation and Iran tensions