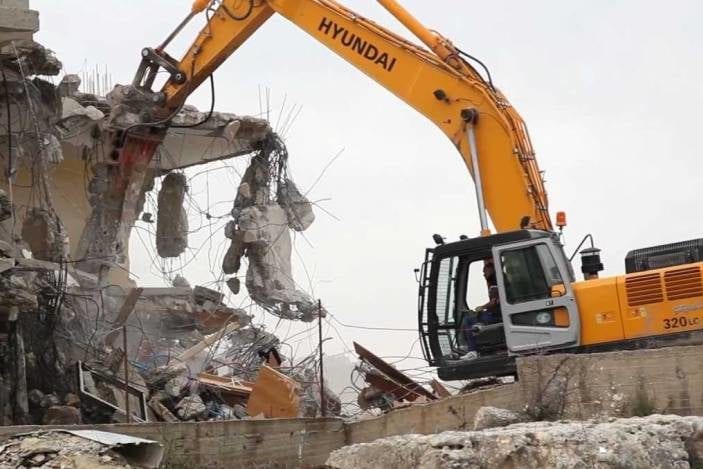 Israeli occupation orders the demolition of a Palestinian house because it was overlooking the illegal Israeli settlement of Pisgat Ze’ev [Shehab Agency]
March 18, 2020 at 10:13 am

The members of Congress said in the letter, which was dated 16 March, that they were concerned about the Israeli demolition of Palestinian homes in occupied Jerusalem and the West Bank.

"We write with concerns over the ongoing home demolitions and forcible transfer of Palestinian civilians in the West Bank, including the recent demolitions in Wadi al-Hummus and other communities in East Jerusalem," the members of congress wrote.

"We urge you to press the Israeli government to prevent more families from being forcibly transferred and having their homes destroyed," they added.

READ: Israel's demolition of Palestinian homes is a war crime according to ICC

"The Israeli government recently accelerated the rate of home demolitions. In the West Bank, the United Nations Office for the Coordination of Humanitarian Affairs (UNOCHA) recorded a 45% increase in the demolitions of homes and other civilian structures in 2019 compared to 2018," they continued.

They reiterated that the US "should work to prevent unlawful home demolitions and the forcible transfer of civilians everywhere in the world and prevent the use of US-origin equipment in this destructive practice."

They asked Secretary of State Mike Pompeo for a response to their letter by 30 April 2020 and "urge you to take immediate action to press the Israeli government to prevent more home demolitions, and request that you provide Congress with the information necessary for proper oversight of the use of US-defence articles and other items purchased with foreign military financing for use in the West Bank."

US decision to back Israel's building of settlements – Cartoon [Sabaaneh/MiddleEastMonitor]