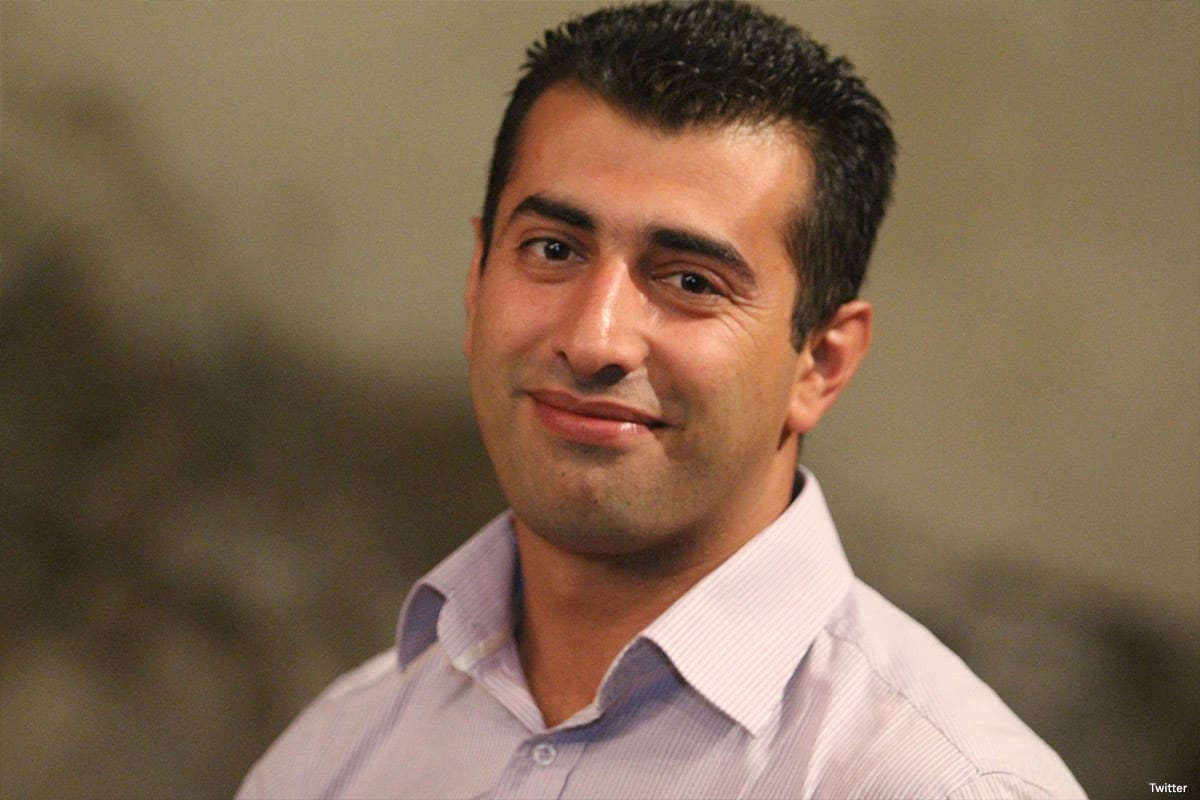 A nine-year-old boy shouts: "Leave dad alone. Get out. Your dog doesn't scare me!"

The boy's home has just been invaded in the middle of the night by a score of soldiers in full battle-dress, armed to the teeth. Accompanying them is a vicious, trained military hound.

The boy and his younger brother are outwardly defiant.

"Take care of the kids," their father tells his wife as the soldiers take him away.

He is blindfolded, handcuffed and led away into the night by this cowardly gang of thugs who pass themselves off as soldiers.

This scene is not fiction. It happened in the early hours of Thursday morning, 30 July, in occupied Palestine.

The man, who now languishes inside an Israeli dungeon without charge, is Mahmoud Nawajaa.

Nawajaa is not a "terrorist" or even a member of the legitimate armed resistance. He is the general coordinator of the Boycott, Divestment and Sanctions (BDS) movement in Palestine.

The BDS movement which Nawajaa helps to lead is an entirely peaceful, legitimate campaign of resistance against Israel's illegal occupation and systemic racism.

The 15-year campaign to hold Israel to account with targeted, ethical boycotts, divestments and sanctions has made massive strides. Israel considers it such a threat to its apartheid regime that it dedicates its spy agencies – including Mossad – towards a global campaign of sabotage and dirty tricks to fight it.

Now Israel has also engaged its "soldiers" in this particular war against Palestinian human rights.

It is a typical sign of Israeli weakness and fragility that they felt they needed around 20 soldiers to kidnap this one unarmed man, who posed no threat to their lives.

A decade or so ago, in all likelihood, the Israeli army and secret police would by now have briefed the Israeli press with disinformation intended to smear a non-violent activist like Nawajaa – and most Israeli journalists would have dutifully parroted their line.

On a quick review of Israeli websites the day after Nawajaa's arrest, they have not even bothered to do that. There is no story about Nawajaa yet published that I can see. To Israelis, he is simply yet another dangerous Palestinian "extremist" who must have done something wrong.

This is a lie. We must pressure our political leaders to demand Nawajaa's immediate, unconditional release from Israeli detention.

In a press release, the BDS National Committee (or BNC, the coordinating body for Palestinian civil society for which Nawajaa works) explained Nawajaa's arrest by Israeli occupation forces: "Israel's regime of military occupation, settler-colonialism and apartheid is desperately trying to terrorise Palestinian BDS activists and their families, after having failed to slow down the growth of the movement. We call on all BDS activists everywhere to further strengthen BDS campaigning to hold Israel accountable."

Their persecution of Nawajaa is only the latest of many examples of Israel's constant violations of international law – aided by its US, Canadian and European allies.

The United Nations' International Convention on the Suppression and Punishment of the Crime of Apartheid defines the objective conditions in which the term "apartheid" applies. Israel of course qualifies, as a multitude of experts have pointed out for many decades.

Under the convention, the "persecution of organisations and persons, by depriving them of fundamental rights and freedoms, because they oppose apartheid," is one of the inhumane acts committed to maintaining an apartheid system. Israel is clearly guilty of this in the case of Nawajaa.

While Nawajaa remains in Israeli prison, there is the additional threat to him and the other political prisoners of the coronavirus.

As the BNC further explained in an email rallying international activists to Nawajaa's defence: "Mahmoud is one of the more than 4,700 Palestinian prisoners in Israeli jails. In the current circumstances, with the COVID-19 virus spreading, mass detention aggravates health and safety risks to all detainees, adding to the common culture of torture and degrading and inhumane treatment of Palestinians in Israeli jails."

The BNC is calling on the BDS movement's supporters to write to their governments to demand Nawajaa's release, mobilise support in local groups, parties and unions, raise awareness on social media (using the hashtags #FreeMahmoud or #LibertadParaMahmoud) and strengthen and escalate our BDS campaigns.

Take inspiration from the fearless example of Nawajaa's young son – yet another sign that the Palestinian people refuse to give up, go away and die quietly.