UAE and Israel disclose their relations after decades of secrecy 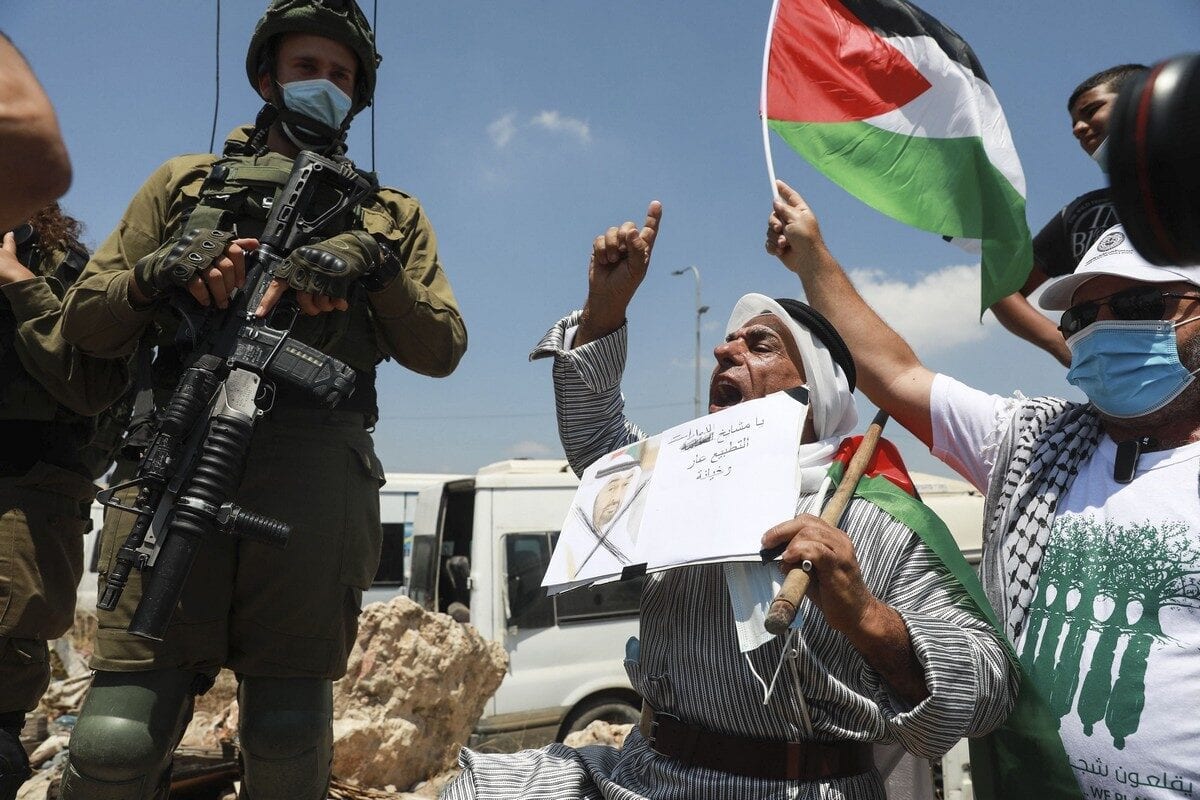 Palestinians gather to stage a protest against the agreement between UAE and Israel in the West Bank on 14 August 2020 [Issam Rimawi / Anadolu Agency]
Dr Adnan Abu Amer
AdnanAbuAmer74
August 15, 2020 at 2:52 pm

The rapid development of normalisation of the Emirati-Israeli relations has constituted a truly historic occasion to turn the page after decades of clandestine contact, only then to make them public without shame nor consideration for any Palestinian and Arab response.

Abu Dhabi's haste in an official announcement to normalise its relations with Tel Aviv, without an urgent motivation or need to take this step is surprising, especially since the Israeli relations with the Palestinians are passing through their worst phases, placing a question mark about the motives and unconvincing justifications of the Emirati move.

The United Arab Emirates (UAE) and Israel have increased their dealings in recent months, and the opening of an Israeli embassy in Abu Dhabi is no longer a dream. Likewise, an Emirati embassy in Tel Aviv or even Jerusalem is no longer a far-fetched dream, because the UAE has crossed many red lines through its leaders' public communication with Israel.

Before the recent agreement on the normalisation of their official relations was announced, a new change took place in Abu Dhabi's contact with Tel Aviv. The contact was not initiated by Israel, but rather by the UAE, when its Foreign Minister Abdullah Bin Zayed, the younger brother of the Crown Prince of the UAE Mohammed Bin Zayed, posted on his Twitter account, congratulating the Jews on the Hanukkah holidays – a post which received 4,600 likes.

At the time, Bin Zayed's tweet did not surprise anyone in Israel. Indeed, Israeli Prime Minister Benjamin Netanyahu considered it a result of the tireless efforts he is making at the moment, while Foreign Minister Israel Katz thanked his Emirati counterpart and called for the development of economic relations between Israel and the Arab Gulf states.

We do not need a lot of insight to read between the lines in these personal correspondences between the leaders of the two countries, Israel and the UAE, because indications confirm that they are aiming to bring these relations to the surface. It may not be a surprise for the Israeli government to announce in the near future the opening of diplomatic representation in Abu Dhabi, which was done in the last few hours.

Read: After UAE, Bahrain will be next to sign peace deal, says Israel official

The level of communication between Abu Dhabi and Tel Aviv gives this expected result, as there are trade and diplomatic relations, and visits by academic and sports delegations. It was decided that the international exhibition, Expo 2020, would be held in Dubai, had it not been for the emergence of the coronavirus pandemic.

The Israelis claim that there are many common denominators between Israel and the UAE, as both have close relations with the US and Egypt, and these four countries share an alliance against Iran and the armed jihadist organisations, making them both benefit from this relationship.

Furthermore, Israel also benefits from US and Egyptian relations with the UAE, by obtaining an entry card to a huge commercial market, and an overt presence in the rich Gulf region. As for the Emirati leaders, they have an alliance with a regional power – Israel – and according to the available information, relations are growing and warming over time.

The announcement by Netanyahu weeks ago, about cooperation with the UAE to fight the COVID-19 pandemic, revealed a long process of intense bilateral contacts in the past few months, culminating in Abu Dhabi and Tel Aviv's announcement that this scientific and medical agreement was part of their constructive cooperation.

It is true that officially the UAE and Israel do not have diplomatic relations, but they do cooperate in several areas. For a few years, Israel has had an official representative in the International Renewable Energy Agency in Abu Dhabi. Surely, the two companies that will cooperate with the Emirati companies will not be the first to operate in the UAE, which confirms that private company contracts give the Israelis advantages for this relationship with the UAE, so that they receive its benefits. These health and economic agreements have clear political dimensions.

Since the beginning of bilateral relations, the Israelis have realised that they will bring knowledge, data and money. There is a secret behind this story, however, surrounding this cooperation by a large wall of secrecy, perhaps because the security services in the two countries, Israel and the UAE, operate covertly. Israel was always hoping for a rare statement from Abu Dhabi expressing warm relations between the two governments, because the Israelis and the Emiratis have been doing joint business with the consent of their governments since the 1990s.

US President Donald Trump's announcement that Abu Dhabi and Tel Aviv reached this historical agreement confirms that clandestine relations between them have been ongoing for years. However, the last months witnessed more openness from Abu Dhabi regarding the relationship with Tel Aviv, as it showed its readiness for cooperation in a wide range of bilateral fields.

In terms of Palestinian positions, they did not wait long to issue their reactions to the Israeli-UAE agreement, considering it a stab at the back of the Palestinian issue, and refused any UAE justification for it, because Abu Dhabi is on a path that contradicts the work of the Arab League.

The Palestinians have always felt that the UAE has been seeking for years to exploit their suffering and their need for financial and relief aid, to stipulate that they should not issue a position condemning any step to enhance normalisation with Israel.

Opinion: Another bad day for the Palestinians as Israel and UAE normalise relations