Egypt: will the state allow rapists to act with impunity after the 'Fairmont Crime'? 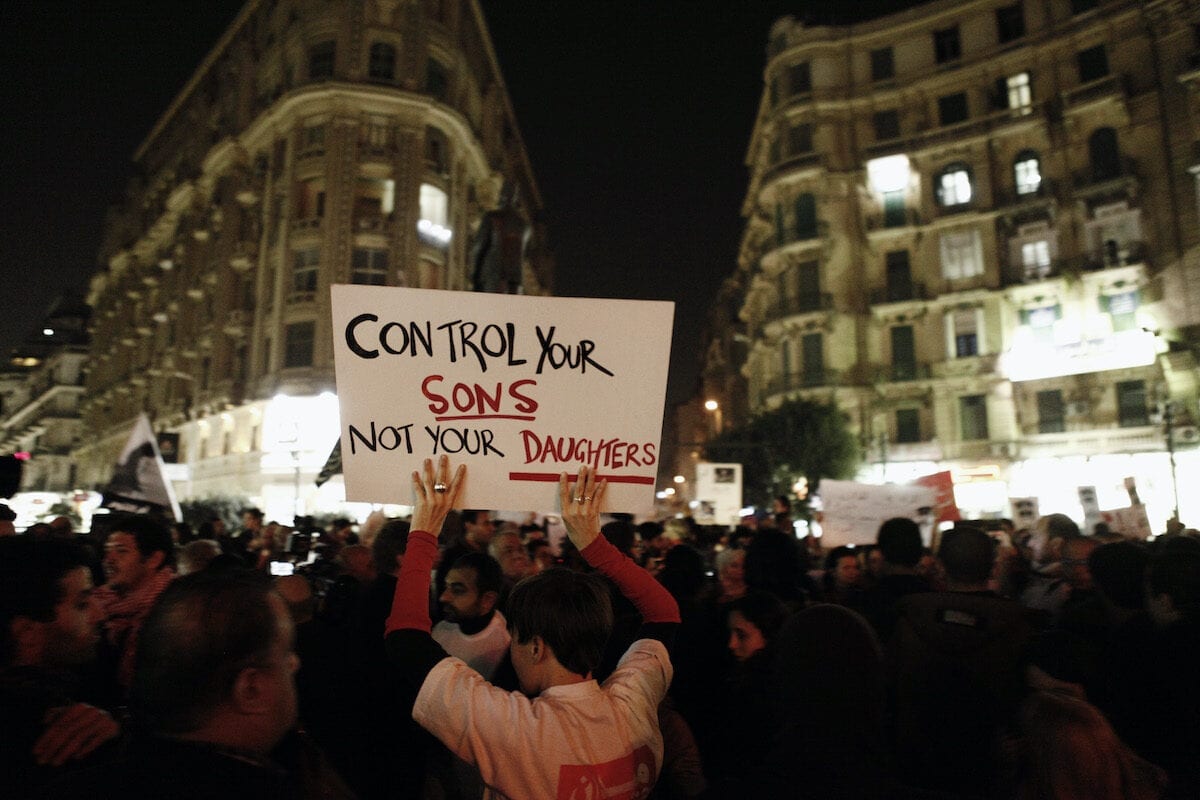 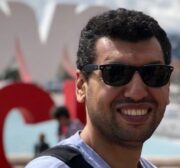 Even the most optimistic of observers did not expect the Egyptian government to pay attention to the Fairmont Crime, the gang rape scandal in Cairo's Fairmont Nile City Hotel that has shocked the country since allegations surfaced online two months ago. Everyone working to reveal the truth about what happened hoped that the state would open an investigation into the incident. Women's rights defenders were sceptical, though, well aware that the government's approach towards such crimes is either to deny or simply bury the case.

Indeed, the government's response, although different in form, has not been significantly different in essence. Little did the human rights campaigners know that by involving the state-run National Council for Women (NCW) and the Public Prosecution Office in the case they have opened the first door for the acquittal of those accused of rape and for the blame to be attached to the victims.

The story became public in April, when one of the survivors spoke out about the "gang rape" to which she claimed to have been subjected at the hands of a number of wealthy young men in 2014. The defendants, she said, filmed the rape and carved their names on her body with a sharp object, then blackmailed her with a video of the incident. Photos of the suspected rapists were later leaked to social media in a campaign seeking justice for the victims.

As the case developed, the NCW lodged a complaint with the public prosecutors on 4 August demanding an investigation into the incident based on the testimony of a survivor who spoke to the council in June. The prosecutors swung into action.

A number of state institutions were then apparently alarmed by the fact that some of the rape suspects have links with senior officials and well-known businessmen. They were all the more concerned that the case has been covered in reputable international media outlets, and was thus spiralling out of their control.

The government of President Abdel Fattah Al-Sisi is keen to promote women's issues internationally as one of its "accomplishments", using projects carried out by the NCW (some of which are funded by the European Union) as examples. Hence, working to stop the online campaign has become a priority for the government, which has intervened — superficially — to appear as the protector of the rights of rape victims. That intervention, however, is driven by the state's desire to bury the case and deter survivors and witnesses from any future participation in social media campaigns against sexual abuse.

Since Judge Hamada Al-Sawy became the head of the Public Prosecution Office in September 2019, it has worked to promote itself as the guardian of morals and values in society. Its rhetoric in various statements over the past year has reflected that mindset. In a statement on another rape case on 30 May, though, instead of supporting the victim, the prosecutors referred to both the victim and alleged rapists as culprits in "immoral crimes".

Indeed, the statement justified the use of law no. 175/2018 for combating electronic crimes, which punishes "anyone who attacks family values and principles in society". The law was cited as the basis for warning families and parents against "matters that have sneaked into the lives of our youth with the purpose of spreading debauchery among them under the pretext of pathetic liberalisation campaigns." The statement also held "families, society and institutions" responsible for "social surveillance". 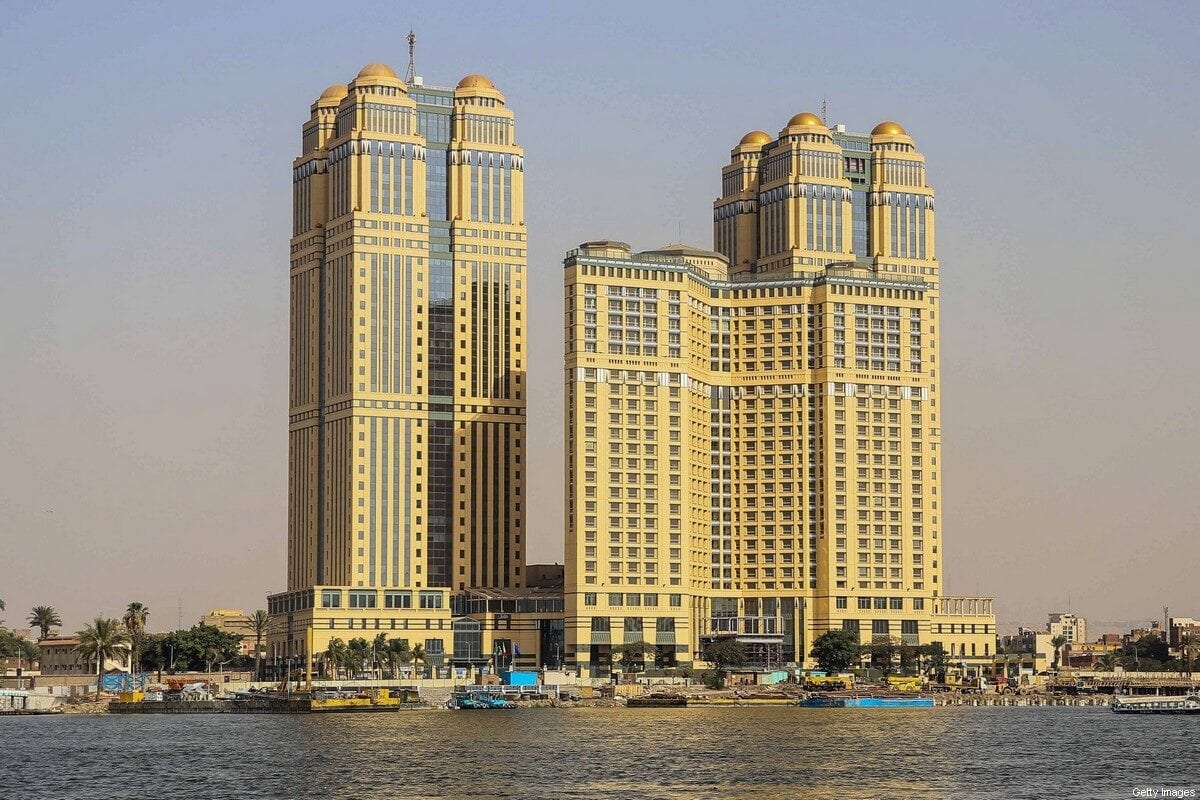 The five-star Fairmont Nile City hotel, where an alleged sexual assault took place in 2014, in the Egyptian capital Cairo on 30 July 2020 [SAMER ABDALLAH/AFP via Getty Images]

Another statement dated 9 June reversed an earlier decision to imprison the victim and instead ordered her transfer to a centre for rehabilitating female victims of violence, arguing that her behaviour required "correction" to be compatible with the values of Egyptian society. That guardianship approach has also been used in the case known as the "Tik Tok women", where five social media "influencers" have been jailed on charges of "violating Egyptian family values". The charges were not based on any evidence of involvement in crimes of inciting violence or hatred, representing another assault on freedom of expression in Egypt.

Regrettably, the NCW did nothing to object to that approach or attempt to correct it. If anything, the NCW only serves as a cosmetic tool for the Egyptian state in the international arena.

Since the Sisi government's announcement of its Vision 2030 for sustainable development, the NCW has failed to achieve its declared aims of "consolidating recognition of the intrinsic value of Egyptian women's rights". Nor has it been able to honour its objective of "examining the effectiveness of government policies and directions related to the advancement of the status of women".

Contrary to its stated goals, the council has not been able to improve the conditions of sexual violence survivors, and stood idly by when witnesses in the Fairmont Crime case were subjected to virginity tests and portrayed as culprits rather than victims. In addition, showing support for the victims and survivors has become a crime punishable by jail, and the NCW is merely watching on from the sidelines.

The prosecution office's response reflects its attempt to support the alleged rapists and protect them from punishment. Although there are thousands of other cases of torture and sexual violence yet to be investigated, the public prosecutor decided to open a probe into the Fairmont incident specifically.

The prosecution is not legally obliged to bring charges against defendants in this case. Its authority in this respect is quite broad, because Egyptian law relies on the principle of "appropriateness" in dealing with such cases. The prosecution, therefore, is not legally required to investigate cases which are regarded as being of a less serious nature, such as drug consumption or committing immoral acts.

As the alleged rapists have been largely successful in smearing the victim and the witnesses, the public prosecution responded by taking over the role of the educator of the victims' parents, advising them on how to bring up their children morally, thus implicitly blaming them for their predicament.

It is no secret that the general tendency of the Public Prosecution Office is to support impunity for the perpetrators of violence, despite the submission of thousands of complaints related to torture committed against those who are forcibly disappeared or arbitrarily jailed in Egypt. It refuses to conduct investigations into allegations of torture due to pressure from the National Security Agency. Similar to its approach in blaming victims of sexual violence, the prosecution denies reports of torture prior to launching any investigation into them, and brings charges against victims of torture, accusing them of slandering police and other misdemeanours.

The Geneva-based Committee for Justice human rights group has documented 106 incidents of torture in Egypt in the first four months of 2020 alone, but none of them have been investigated by the Public Prosecution Office. Meanwhile, the UN's Committee Against Torture in 2017 indicated that torture and allowing criminals to act with impunity are two systematic approaches adopted by the executive and judicial arms of the Sisi-run state.

It is highly likely that the Public Prosecution will succeed in bestowing impunity upon the rapists in the Fairmont Crime, particularly with the complicity of the NCW in disclosing the identities of victims and witnesses who came forward. The NCW's shameful stance will contribute to silencing victims, and even prevent them from defending themselves against new accusations brought against them by the state.

Attaining justice for survivors of sexual violence in Egypt remains a distant dream. It gets all the more distant so long as authorities continue their unfounded and vindictive accusations against victims and their supporters. High-level connections and wealth should not allow criminals, including rapists, to be able to act with impunity.