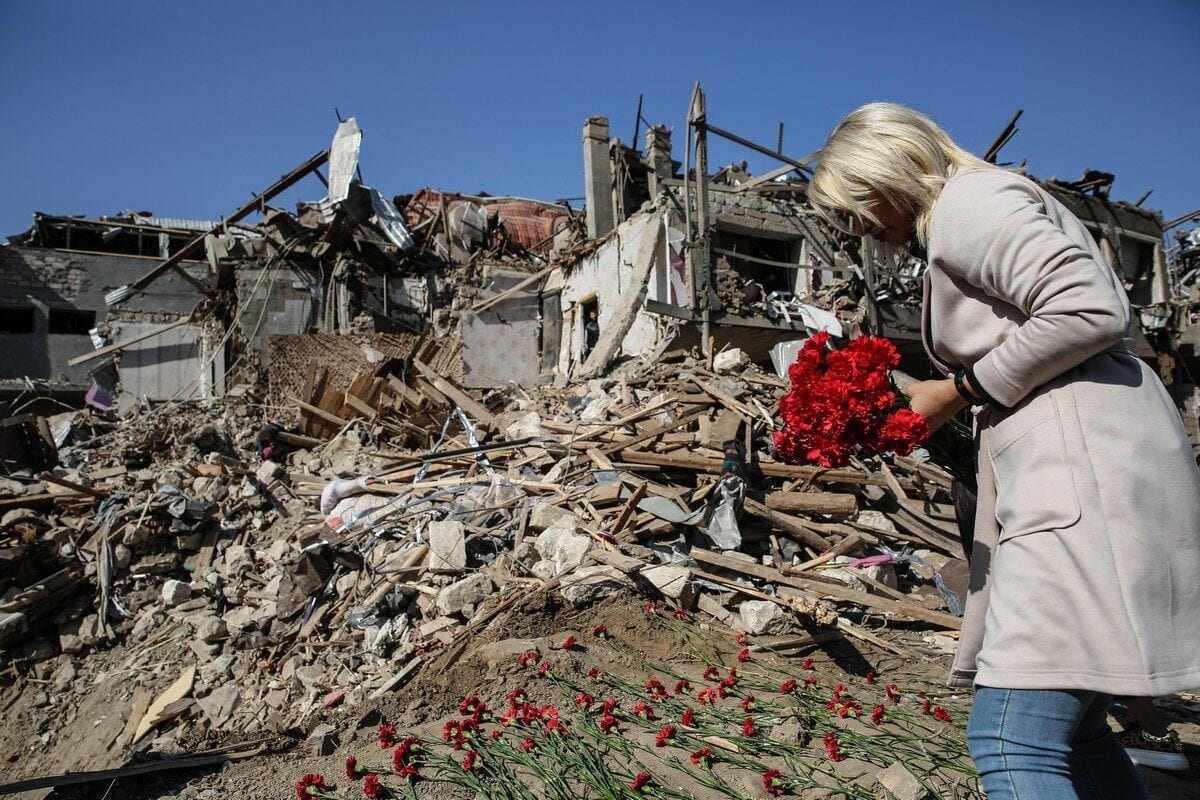 A woman lays a carnation for children on wreckage of a house for children who killed and injured in the attack after Armenian army's alleged attacks with long-range missiles, in Ganja city of Azerbaijan on October 12, 2020 [Onur Çoban - Anadolu Agency]
October 15, 2020 at 7:41 pm

Hopes of a humanitarian ceasefire ending fighting over Nagorno-Karabakh sank further on Thursday as the death toll mounted and Armenia and Azerbaijan accused each other of launching new attacks, Reuters reports.

Armenia accused Turkey of blocking flights carrying emergency aid from using its airspace, and Azerbaijan's president warned of "new victims and new bloodshed" from fighting over the mountain enclave that broke out on Sept. 27.

Azeri President Ilham Aliyev demanded that Armenia "halt attempts to capture liberated territories back" and said his country would take all regions of Nagorno-Karabakh if Armenia "acts negatively."

Last Saturday's ceasefire, aimed at letting the sides swap detainees and bodies of those killed in the clashes, has had little impact on the fighting around Nagorno-Karabakh, a mountain territory internationally recognised as part of Azerbaijan but populated and governed by ethnic Armenians.

In the deadliest flare-up since a 1990s war killed about 30,000 people, 604 Nagorno-Karabakh defence personnel have been killed, ethnic Armenian authorities say.

On Thursday, three Azeri civilians were killed and three were wounded during a funeral in Azerbaijan's Terter region when an artillery shell fell on a cemetery, presidential aid Hikmet Hajiyev said on Twitter.

That would add to Azeri estimates provided on Wednesday that 43 civilians had so far been killed. Baku does not disclose military casualties. The prosecutor's office said earlier on Thursday that two civilians had been wounded in shelling of the Aghdam area.

The Armenian prosecutor-general's office said Azeri drones had killed two soldiers in the Vardenis region of Armenia on Wednesday, raising the Armenian military death toll to five. The servicemen were not involved in military action, it said.

A tweet from Nagorno-Karabakh's ombudsman accused Azerbaijan of using heavy rockets to target civilian infrastructure in the town of Stepanakert.

Reuters could not independently verify the reports.