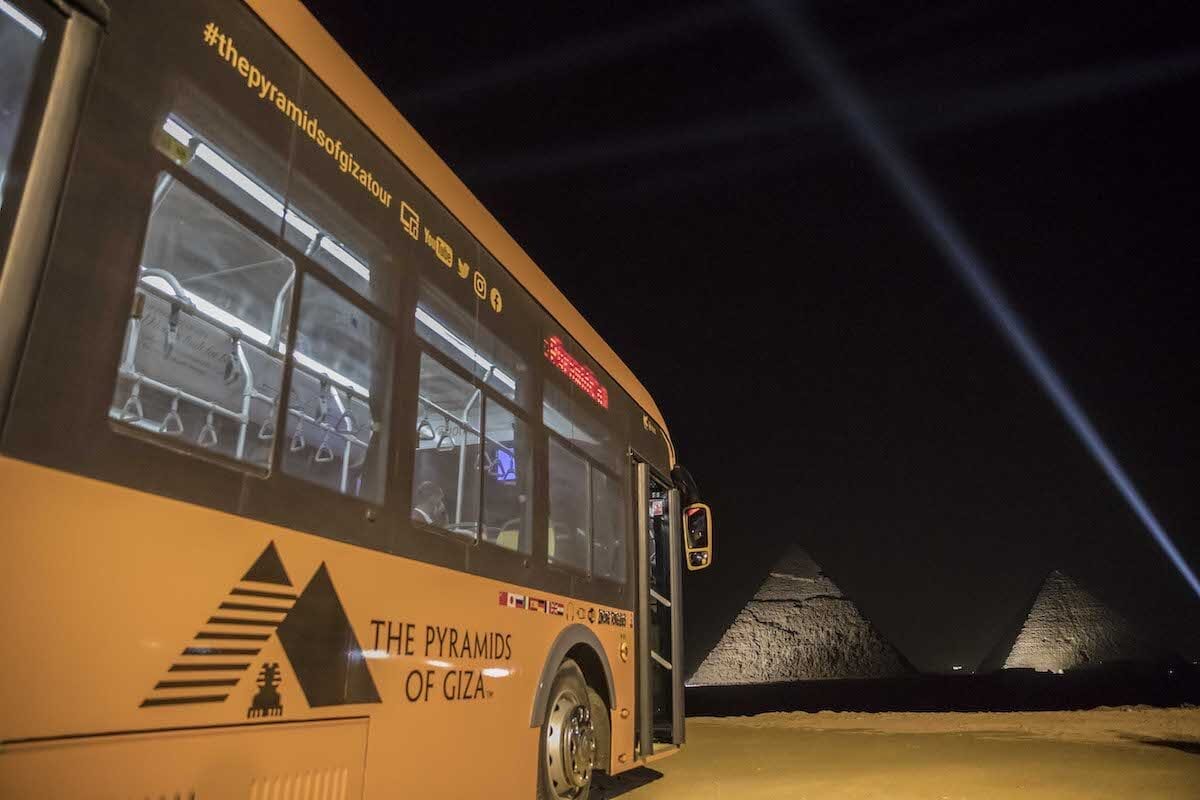 A general view of (background R to L) the Great Pyramid of Khufu (Cheops) and the Pyramid of Khafre (Chephren) at the Giza Pyramids necropolis on the southwestern outskirts of the Egyptian capital Cairo during an official ceremony launching the trial operations of the site's first environmentally-friendly electric bus (foreground) and restaurant as part of a wider development plan at the necropolis on 20 October 2020 [KHALED DESOUKI/AFP via Getty Images]
October 21, 2020 at 7:30 pm

Egypt has unveiled new visitor facilities on the plateau outside Cairo where the Great Pyramid of Giza and the Great Sphinx are situated, the country's most visited heritage site and the sole remaining wonder of the ancient world, Reuters reports.

Developers late on Tuesday night opened a new restaurant, "9 Pyramids Lounge", which covers an area of 1,341 square meters and overlooks the Giza pyramids. There will also be a fleet of new environmentally-friendly buses to guide tourists around the plateau.

"One of the problems always faced is that people say there are no special services for tourists, that there is no cafeteria, no restaurant, nothing that can be offered to visitors," said Mostafa Waziri, Secretary-General of the Supreme Council of Antiquities.

The new facilities are all easily taken part and reassembled so as to protect the antiquities and Waziri said the open-air restaurant offered "a panorama view that cannot be matched anywhere in the world."

READ: Egypt denies its pyramids were built by aliens

Tourism accounts for up to 15% of Egypt's national output. However, officials have said previously the sector is losing around $1 billion each month after largely shutting down for several months from March due to the spread of coronavirus.

The changes at the plateau are part of wider efforts to develop key tourist sites in the country. Next year the Grand Egyptian Museum, which is set to be the world's largest archaeological museum, is due to open just beyond the Giza Pyramids.

"We will organise the salespeople," said Sawiris. "We will not deprive them of their income but we will put them into suitable, nice places."