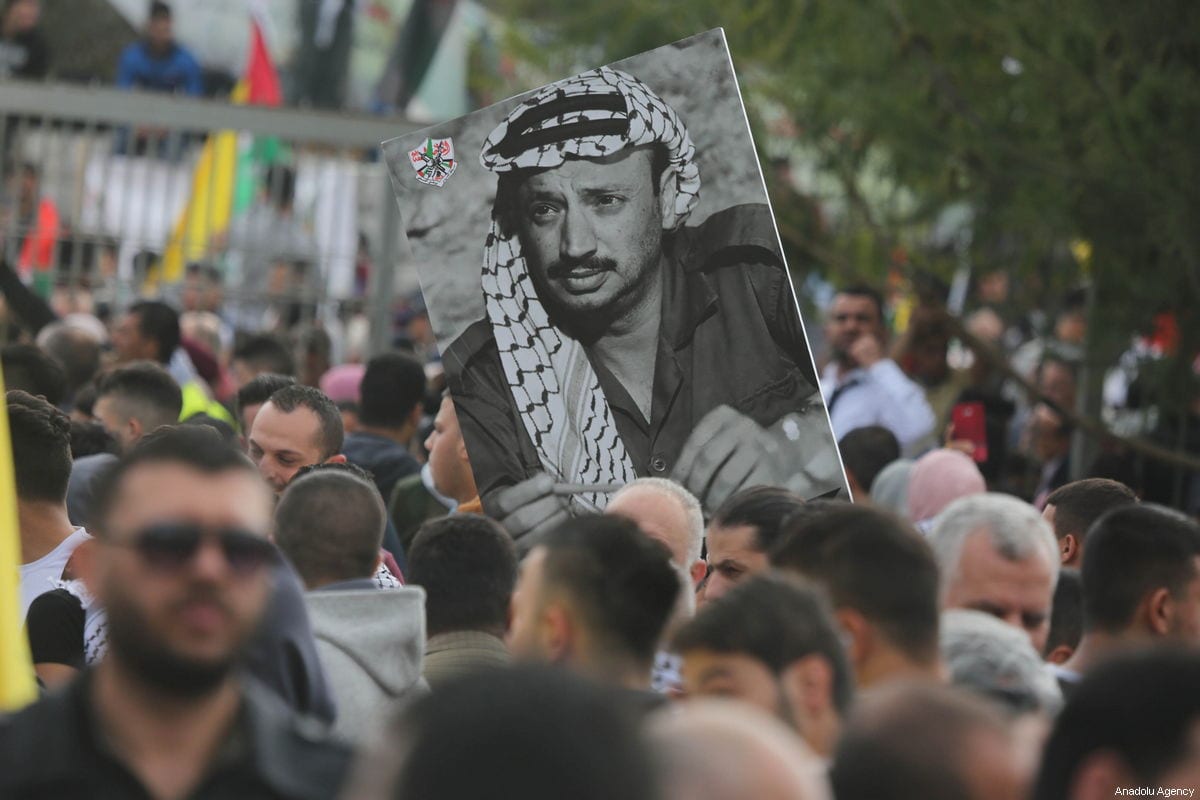 Palestinians gather at the tomb of Yasser Arafat, in the West Bank city of Ramallah, to commemorate the anniversary of his death, on 11 November 2018 [Issam Rimawi/Anadolu Agency]

I miss Yasser Arafat. Like many revolutionary leaders he was flawed but he had guts, determination and a courage that reflected the Palestinians he served so well. When challenged by him, the members of the Arab League were either in awe, fear or a combination of both, which led the Palestine Liberation Organisation to be treated as "the sole, legitimate representative of the Palestinian people."

As the anniversary of his death approaches, it has become increasingly obvious that such respect is not commanded by the current Palestinian leader and PLO chair, Mahmoud Abbas. At 85 years old, and having frittered away the goodwill and respect built up by Arafat, he is a pale imitation of his former boss who has led the Palestinian people into a cul-de-sac of despair from which it will be difficult to return. His betrayal of the people he is supposed to serve has come about through a toxic fusion of corruption, incompetence and cowardice. This, I believe, has led to the normalisation deals being agreed between Israel and some members of the Arab League, of which Sudan is the latest, but won't be the last.

The UAE, Bahrain and the supposedly "transitional" government in Khartoum would never have dared to even consider going down the path of normalisation with Israel if Arafat had still been alive. The Palestinian leadership in Ramallah can't even summon an emergency meeting of the Arab League or pull together a condemnatory statement about normalisation, so pitiful is the regard in which it is held by other Arab States.

It's a far cry from March 1979 when Egypt signed a peace treaty with Israel in Washington; the League moved swiftly to move its headquarters from Cairo as a punishment to Egypt for signing the agreement with the Zionist State. Arafat is no longer with us, and that is reflected in the lamentable state of affairs whereby some Arab leaders can so easily have their arms twisted by a desperate US President who needs to camouflage his disastrous foreign policy failures in the Middle East ahead of the presidential election on 3 November.

What's even more damning for Abbas and his leadership is that we even have Saudi Arabian Prince Bandar Bin Sultan, the Kingdom's former ambassador in Washington, recycling and inventing history to demonise the Palestinian people and Arafat's legacy. Moreover, he wouldn't have had the guts to do that when Arafat was alive. It is quite clear to anyone who knows Palestinian history that Bin Sultan's unwelcome intervention is simply paving the way for Riyadh's own normalisation with the occupation state.

His claim that the Palestinians rejected the Clinton Parameters proposal, which were guidelines for a permanent peace agreement proposed by US President Bill Clinton in December 2000, is a blatant lie. Arafat accepted the parameters with a few reservations. The shameless Saudi royal also lied when he said that the Palestinians rejected King Fahd's 1982 peace initiative; Yasser Arafat, in fact, accepted it, and it was Israel which rejected and condemned it as "a plan to destroy the Jewish state in stages." Israel subsequently invaded Lebanon to uproot the PLO from its base there.

Those who tell such blatant lies are the same people who justify the occupation and the ongoing persecution and oppression of the Palestinian people. Arafat would turn on anyone who tried to undermine the heroic resistance and legitimate struggle of his people, no matter who it was.

READ: Reconciliation really is the only option for the Palestinians

My abiding memory of the late Palestinian leader is from April 2002 when his compound in Ramallah was under siege and surrounded by Israeli tanks. Defiant as ever, and with a pistol lying on his desk, his message to the world was clear: he was going nowhere and neither were the Palestinians.

In stark contrast. His successor as President, Mahmoud Abbas grovels before members of the Arab League, often expressing his gratitude for their support for the Palestinians. Almost without exception he emphasises his thanks to Saudi Arabia. With Riyadh fast-tracking Sudan's normalisation while contemplating its own, Abbas's obsequiousness has obviously not worked.

Meanwhile, the propaganda and lies spewing out of UAE- and Saudi-run TV stations fool no one. The leaders in Riyadh and Abu Dhabi have betrayed the Palestinians and the legacy of their predecessors who gave unqualified support to the people of occupied Palestine. Ordinary people across the region recognise this treachery, even though many are too afraid to challenge it.

The liars who are slandering and demonising the Palestinians while whitewashing the brutal Israeli occupation will never succeed. Deep down, they probably know that, but they have sold their soul to the Zionist devils in Tel Aviv and Washington and history will judge them severely.

READ: It's time to tear up the Oslo Accords

The legitimate rights of the Palestinians to resist Israel's odious occupation and return to their land are accepted around the world. There is still massive support for Palestine in the UN General Assembly, and ordinary citizens are more prepared than ever before to endorse the peaceful resistance promoted by the Boycott, Divestment and Sanctions (BDS) movement.

As for the Arab League, its craven membership would do well to remember what Arafat told Time magazine after addressing 18 Arab Kings, Presidents, Emirs and other leaders gathered in Morocco in November 1974: "Palestine is the cement that holds the Arab world together, or it is the explosive that blows it apart." The organisation and the Arab capitals considering normalisation ignore the late Palestinian leader's words at their peril.