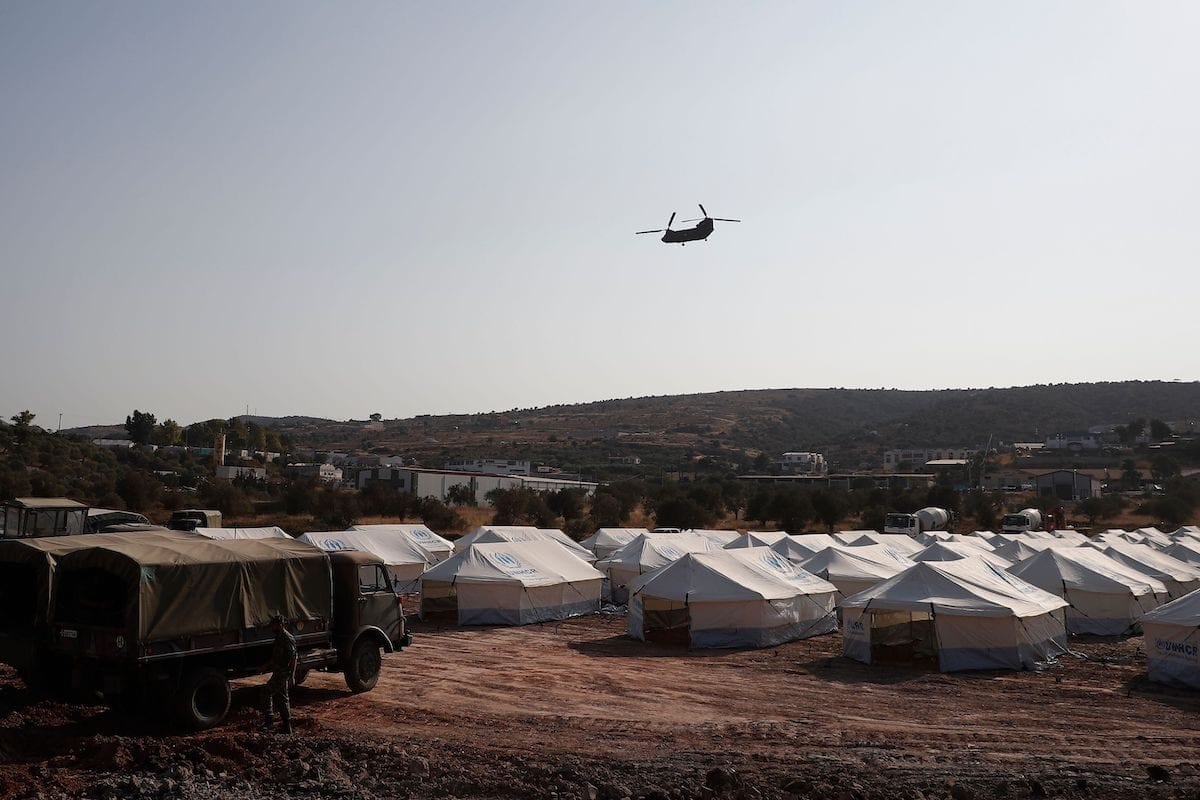 A Greek army's helicopter carrying European Council President flies over the new refugee and migrant camp near Kara Tepe, on the Greek island of Lesbos, on September 15, 2020. days after Europe's largest Moria camp on the island burnt down on September 15, 2020. [DIMITRIS TOSIDIS/POOL/AFP via Getty Images]
November 20, 2020 at 1:02 pm

Greek authorities have arrested a man accused of carrying out multiple executions for Daesh while working for the terror group in Syria, the Associated Press (AP) reported.

The 27-year-old Syrian man was arrested at Eleonas camp in the Greek capital, Athens, early yesterday, police said, without naming the suspect.

He was later charged with membership of a terrorist organisation and complicity to murder.

The suspect has been remanded in police custody pending a preliminary hearing on Monday, when he will be able to answer the charges.

Local outlet, the Greek Reporter, said the 27-year-old had not denied the charges during interrogation.

A statement from Athens authorities was quoted by AP as saying: "The suspect… is accused of being a member of a terrorist organisation and participating in acts of terrorism, with participation in multiple acts of wilful homicide."

Police added that the suspect had appeared in a video featuring Daesh fighters that was disseminated in 2014. They did not say if this footage had led to the man's identification.

READ: US servicemen who foiled Daesh terror attack on train appear in court in France

The suspect, who arrived in Greece from Turkey on 28 March 2018, had kept a "digital record" of executions and other crimes he is believed to have perpetrated, the statement added.

The evidence, which included video recordings made on a mobile device, has been collected by forensic experts who are examining the record of the 27-year-old's alleged crimes.

No further details on the location of the alleged executions and crimes was provided to the press.

Prior to his arrest, the 27-year-old was living in a container home in an Athens refugee camp with his wife and five children.

Greece's state-run broadcaster reported the Syrian man and his family have a pending asylum application in the country, though police were unable to confirm the claim.

He was arrested after an altercation in the camp in which he suffered minor injuries, Greek authorities said. It was not immediately clear if the altercation was related to his alleged crimes.

Greece's criminal code was updated last year to allow the judiciary to charge terrorism suspects for membership of a terrorist group abroad as well as for crimes committed outside the country.

Germany has adopted similar legislation, using the principle of universal jurisdiction, and has brought several former Daesh members to justice.

Last week, a German woman was charged with crimes against humanity over her alleged persecution of the Yazidi minority while in Syria.

While last month, a German-Tunisian Daesh widow was jailed in Germany for three and a half years over her membership to the group and her role in enslaving a 13-year-old Yazidi girl.