With no charge or trial, Israel interns socialist MP – again

A little over one year after she was released from an Israeli jail, the Palestinian lawmaker Khalida Jarrar once again languishes behind bars.

She was arrested by Israeli occupation forces earlier in July. This week, it was ordered by an Israeli military commander that she be imprisoned for six months.

There was no charge, there was no trial. The say-so of one Israeli army officer was all it took.

This is the nature of the occupation: Israel's military dictatorship in the West Bank.

This practice of internment without charge or trial is known by an Israeli euphemism: "administrative detention". The practice dates back to the British occupation of Palestine – the so-called "Mandate".

Military Order 1651 allows commanders to detain a Palestinian if they have "reasonable grounds to presume that the security of the area or public security requires the detention."

But these "grounds" are often based purely on secret evidence presented by the Shin Bet, Israel's secret police force, which is notorious for torture, kidnappings and assassination of Palestinians.

These internment orders are for six months at a time, but are indefinitely renewable. More than 500 Palestinian political prisoners are currently held by Israel in this way. This violates the Fourth Geneva Convention, as well as the basic human right to not be subjected to arbitrary imprisonment.

So much for "Israeli democracy". Israel is not a democracy: for Palestinians it is a racist military dictatorship.

We are not even allowed to know what the Israeli occupation forces and their torture regime are accusing Jarrar of – they are not required to present any evidence. The officer can merely lock her away, and that is that. A kangaroo court – run purely by Israeli army officers – will likely rubber stamp the internment at a later date, based on secret evidence.

Israel's military courts – a racist apartheid institution which are used against Palestinians, but not the Israeli settlers living in same territory – are a total farce. They have a conviction rate of 99.7 per cent.

Jararr is an outspoken critic of both the Israeli regime and the Palestinian Authority's collusion with it. In an interview with the Washington Post in April she spoke against PA leader Mahmoud Abbas' agreement to negotiate with US President Donald Trump.

As well as being a member of the PA's Legislative Assembly – effectively its parliament – Jarrar is a former director of Addameer, a Palestinian prisoners' rights association. She is still a member of the board of directors. 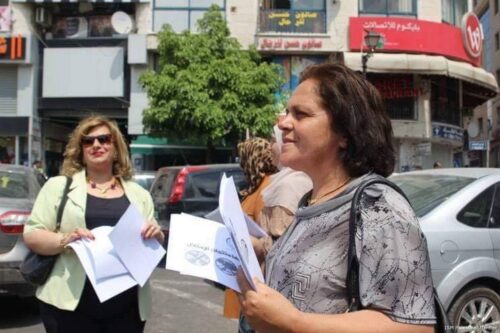 Addameer called for her immediate release and said that "her detention constitutes an attack against Palestinian civil society leaders." The group has also called for concerned citizens around the world to write to their MPs, and to organise demonstrations in their respective countries calling for Jarrar to be released – as well as Khitam Al-Saafin, president of the Union of Palestinian Women's Committee, who was arrested by Israel on the same day as Jarrar.

Addameer says that both women "meet the United Nations Declaration on Human Rights Defenders definition of a human rights defender as anyone who, either individually or in association with others, works to promote and to strive for the protection and realisation of human rights and fundamental freedoms. It is clearly apparent that Ms Jarrar and Saafin's career has been devoted towards realising, promoting and protecting the human rights of Palestinians. It is our extremely serious concern that Ms Jarrar and Saafin are being illegitimately targeted and punished by Israeli military authorities as a result of their significant human rights work."

Jarrar is a leader in the leftist Popular Front for the Liberation of Palestine, and is a purely political campaigner. As such, Jarrar is being jailed, once again, only for her legitimate political opinions: namely that occupation should end.

This all puts the lie to Israeli claims to be fighting "Islamic extremists".

It does not matter whether Israel's Palestinian opponents are leftist, Islamist or nationalist – this racist state will use all means of repression at its disposal. And it also does not matter whether Palestinians use armed or peaceful forms of resistance. They have a long history of using both forms, but the result is always the same: repression, interment without trial, kidnappings and assassination.

What matters to Israel is that it stops effective Palestinian forms of resistance to Israeli occupation, not violent forms. So whichever is working, the apartheid state will do anything it can get away with to stop it from happening.

It is up to supporters of Palestinian human rights around the world to ensure that the voice of human rights defenders like Khalida Jarrar are not lost and buried at the bottom of an Israeli dungeon.