Sudan: We are ready to reach rapprochement with Turkey at any cost 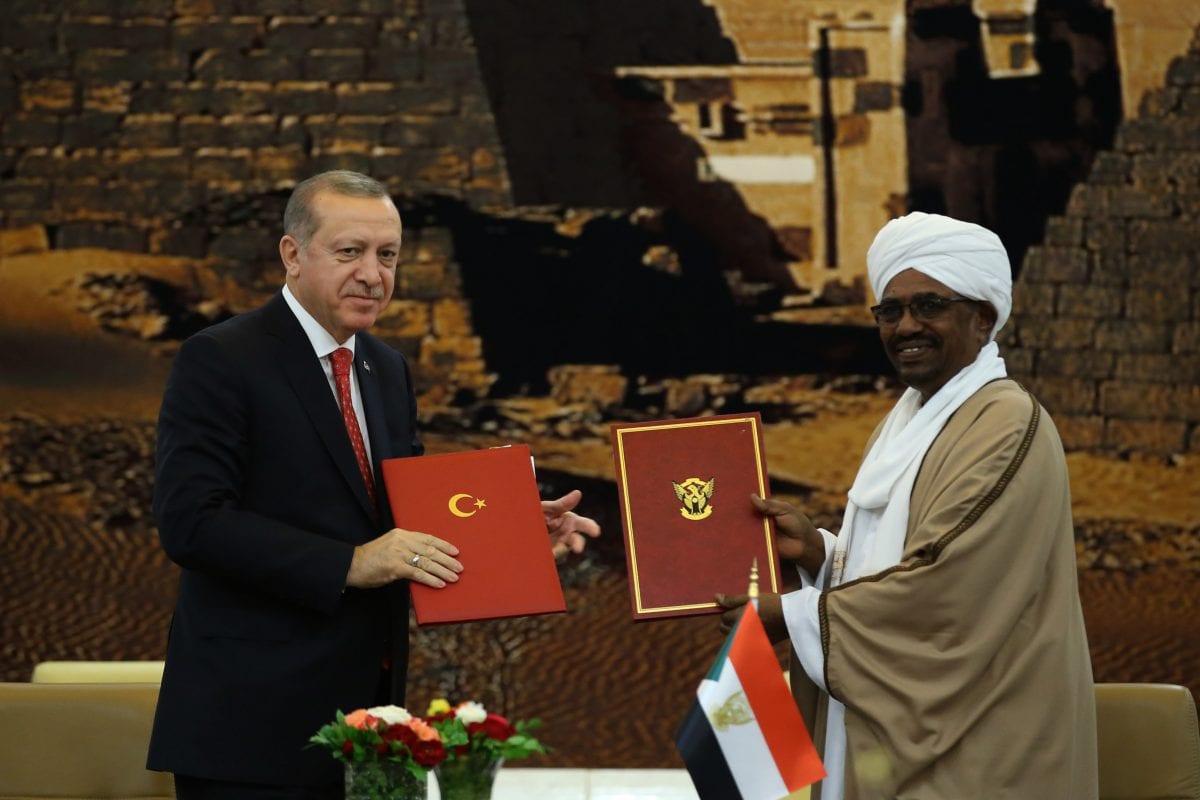 President of Sudan Omar al-Bashir (R) and President of Turkey Recep Tayyip Erdogan (L) pose for a photo after signing bilateral agreements between Turkey and Sudan during their meeting in Khartoum, Sudan on 24 December, 2017 [Turkish Presidency/Yasin Bulbul - Anadolu Agency]
December 28, 2017 at 3:56 am

On Wednesday, Sudan expressed its readiness to "reach a rapprochement with Turkey at any cost," referring to its rejection of Egyptian media reports that criticised the Turkish-Sudanese rapprochement, which culminated in the recent visit of President Recep Tayyip Erdoğan to Khartoum.

Osman considered the criticisms of these Egyptian media outlets as an attempt to "seize the opportunities to undermine Sudan, its people and President Omar Al-Bashir."

On Tuesday, the Turkish president finished his visit to Sudan which he started on Sunday accompanied by 200 businessmen, as part of an African tour. The visit witnessed the signing of 21 agreements in various fields.

Relations between Egypt and Sudan are tense and full of quarrels in the media following several controversial issues, including the dispute over the Hala'ib Triangle border and Khartoum's supportive position towards the Grand Ethiopian Renaissance Dam, which Cairo opposes for fear of its impact on its share of the Nile River water.

Read More: A Sudan-Turkey alliance promises a new direction for the Muslim world

During the press conference, the Minister of Culture and Information said: "Some people want to play with fire. We are a politically and economically independent state. We are ready to reach a rapprochement with Turkey at any cost and under any circumstances. We will not accept the humiliation of the Sudanese people."

He added: "The agreements we have signed with the Turkish side, on top of which the military cooperation, are not a sword lift up against any neighbouring country."

The minister stressed: "We rejected the decision on Jerusalem despite the pressures and threats (without providing details about those threats)."

On 6 December, US President Donald Trump announced his country's official recognition of East and West Jerusalem as the capital of Israel, and the start of the process of moving his country's embassy to the occupied city, which sparked an Arab and Islamic anger as well as international concerns and warnings.

The Sudanese minister said that "talking about the Turkish president's visit and its distortion to be within the framework of building a Turkish-Qatari-Sudanese axis is wrong and unplanned."

He added: "Those who took advantage of the opportunities to undermine Sudan, Sudanese people and President Al-Bashir have to stop."

We have also seen and listened to the immoral breakouts of the Egyptian media, which have been repeated a lot and contained a lot of evil.

He insisted: "Moving the tension to public level is very severe, especially that the differences between Khartoum and Cairo are normal, but our relations with people are based on respect."

The Sudanese minister asserted: "We have also seen in Egyptian TV channels that some people with a narrow view have ridiculed and directed accusations towards the Sudanese government and people, and such inappropriate attempts must stop."

He pointed out that "these defamations will cause a deep wound which will not definitely heal."

In a joint press conference he held in Khartoum with his Turkish counterpart Mevlüt Çavuşoğlu on Tuesday, Sudanese Foreign Minister Ibrahim Ghandour stated that Sudan "has never been part of an alliance, and we do not believe in the policy of alliances. We are open to our African, Arab and Muslim brothers around the world."

In response to a question about some Egyptian media outlets' underestimation of Erdoğan's visit to Sudan, Ghandour said: "We have unfortunately seen the reactions of some of Egyptian media, I do not say all of them, and we were very surprised by such responses, but we do not hold all of the Egyptian people responsible because of mistakes that are committed by some of them."