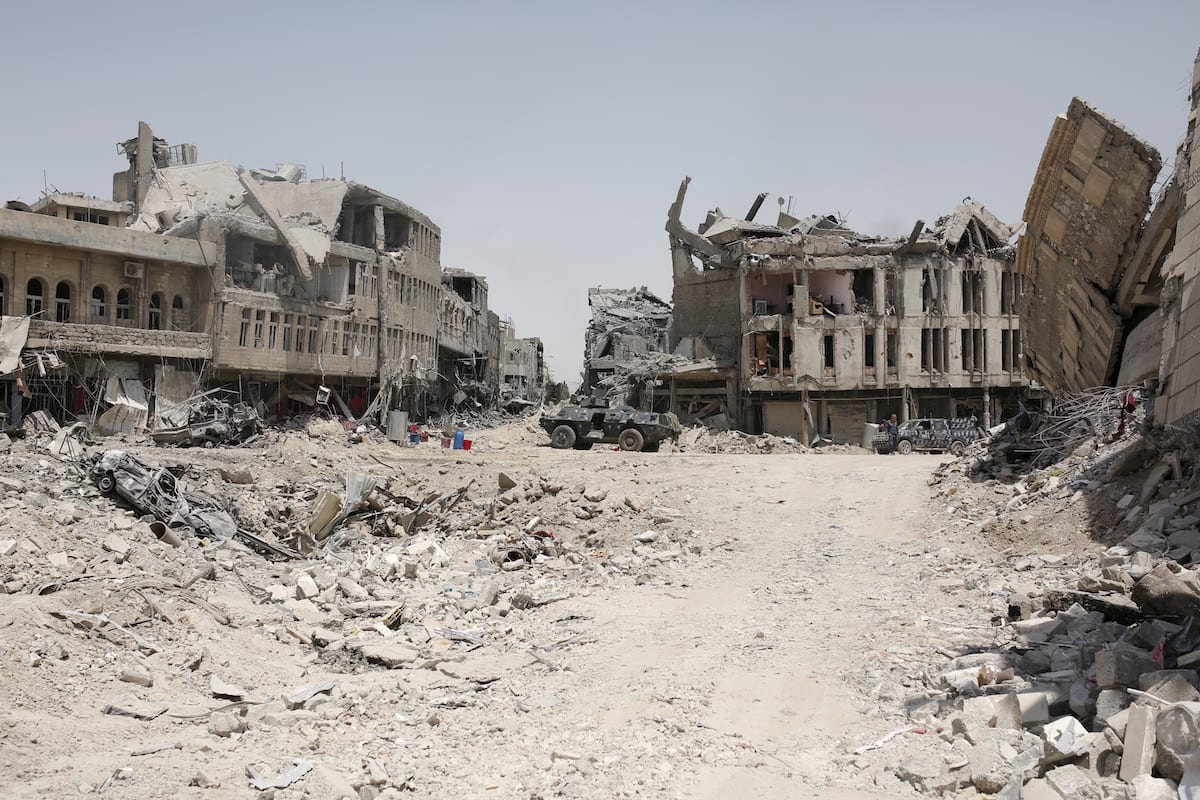 Iraqis start the reconstruction of their buildings after Mosul became completely freed from Daesh on 10 July, 2017 [Yunus Keleş/ Anadolu Agency]

The wanton destruction of life in Iraq has extended into the country's southern hinterland where state developers are bulldozing date palm groves for commercial development purposes. In the last week of June, things came to a head in the district of Al-Madinah, with the uprooting of as many as 2,000 trees confirmed by eyewitnesses. The pained expressions of young farmers, hunched on the ground, weeping inconsolably, did not make the mainstream news.

"Only God hears our pain," wailed one of the farmers, livid at the total lack of disregard shown by Iraq's local and central government; his lifeline has been severed.

"Dates are a valuable Iraqi resource," another man cried, "how can [the Iraqi government] let it be plundered in this way?"

The Iraqi Ministry of Oil and the South Oil Company were named as the culprits, accused by the farming community of contracting the demolition team on 23 June. Despite facing stiff opposition from the local community, the operation went ahead.

In leaked recordings of the incident, date farmers revealed that they were compensated by a mere 70,000 Iraqi dinars (around $59) for each date palm destroyed. "People were not satisfied with this compensation and initially declined, but were forced to comply," explained Hamid Al-Saadi, the president of the Federation of Agricultural Associations in Basra, to local news station Al-Mirbad. "Those who refused were detained under article 4 of Iraq's anti-terrorism law." He pleaded with the government to do everything in its power to protect the livelihood of Iraq's agricultural classes, but no official has sought to engage in dialogue with the disenfranchised farmers.

Over the past decade, Iraq has witnessed a growing preference for dates imported from neighbouring states, namely Iran, Saudi Arabia and Kuwait. Production of the crop has been in decline as a result of the intractable cycle of war and conflict that the country has been locked into since the 1990s. Plantations have shrunk as foreign dates flood the once flourishing local market.

The cultural and symbolic importance of the Iraqi date palm is demonstrated by its depiction in carved tablets dating back to ancient Assyria and Babylonia. The obsession with oil is a contributory factor in the story of the wilting 7,000-year-old date industry. Farmers lack modern technology, and perpetual warfare and militarisation has continued to deny them a long-overdue upgrade, forcing them to relying on primitive cultivation methods. Adding to the ailing industry's deterioration is the mass closure of pressing factories, a problem which compounds the reliance on archaic methods.

Other factors are also at play. Experts cite the combined impact of climate, socio-economic and political issues. Prolonged drought as a result of climate change, pests and diseases, and state neglect at different levels, top the list of reasons for the death of date farming in a country considered the birthplace of date palms.

A new phenomenon, discussed by few, is the silent private sector takeover of date palm plantations and their replacement with high-rise glitzy residences, if the promise of their construction ever bears fruit. These moves suggest a loss of appetite by the Iraqi government for agricultural regeneration and preservation, and a hunger for greater private sector investment in a country whose government has failed to provide security and even basic services.

The farmers whose testimonies were recorded by Al-Mirbad TV accused the local government and state-backed oil conglomerates of lobbying behind closed doors to sell off land which had fed the people of Basra for centuries.

"They value oil, not agriculture," one farmer pointed out, "but this is our wealth."

"You cherish oil, why neglect agriculture?" another farmer asked.

"Abadi promised to plant a million date palms, but here's what we're given," railed a third, tearing his traditional dishdasha in rage.

The destruction of the plantation of Al-Madinah was described by its local population as a crime against the environment, in an operation which obliterated a rich variety of 60 different types of dates. Many have referred to Iraq's penal code in affirmation of these claims, citing "unlawful disturbance of agricultural land" to highlight the crime taking place. As some citizens suspect, private profit is more enticing and requires less commitment from state officials, famous for their astounding portfolio of contractual corruption.

The sight of decapitated palm trees, whose trunks are barely able to stand firm, is common these days across the six provinces where date production is strongest. Some sources have cited unnamed officials from the Ministry of Agriculture who allege that the latest figure is not even half the output of which Iraq boasted in the 1980s.

The policy of agricultural restoration has fallen on deaf ears, and citizens believe that the state has turned its back on date plantations and workers whose hard years of toil in the blistering heat have gone to waste. The industry's unmet expectations could resuscitate Iraq's ailing economy and assist vulnerable populations, but only if the private sector takeover of agricultural land is brought to an end, and quickly.