Russia is using religion to strengthen its influence among Palestinians 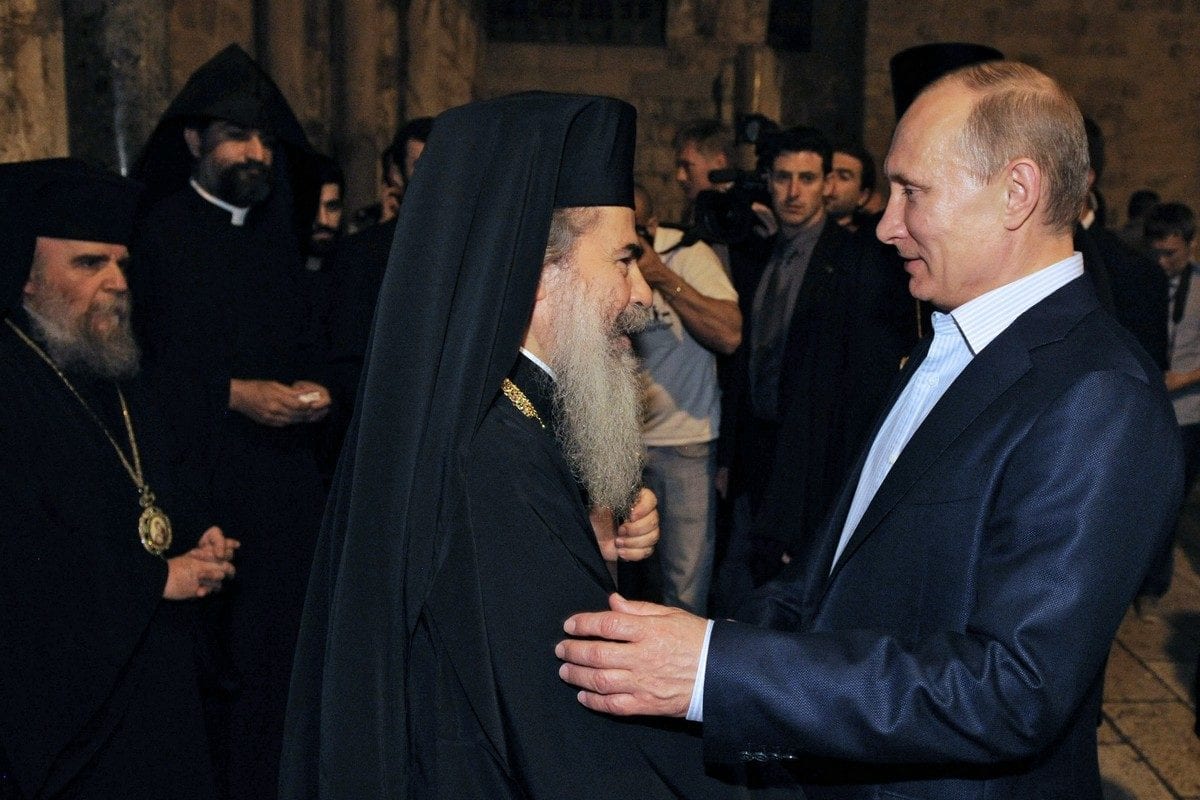 Russia's President Vladimir Putin (R) is greeted by Greek Orthodox Patriarch of Jerusalem Theophilos III during his visit to the Church of the Holy Sepulchre, in the old city of Jerusalem on 26 June 2012 [ALEXEY DRUZHININ/AFP/GettyImages]
Dr Adnan Abu Amer
AdnanAbuAmer74
February 1, 2020 at 10:28 am

Palestinian President Mahmoud Abbas received his Russian counterpart, Vladimir Putin, in the city of Bethlehem this week, and not Ramallah. The choice of venue gave the meeting an unmistakably Christian aspect, something that has been used by Russia recently in its foreign relations.

Last month, Putin met with the Patriarch of the Greek Orthodox Church of Jerusalem, Theophilos III, to discuss the difficulties facing Christians in the Middle East. He expressed his support for preserving Orthodox properties in the city and protecting regional Christians. Russia announced in November its intention to protect the Middle East's Christians after Putin met the Patriarch in Moscow with a delegation from the Palestinian Authority.

The "religious" foreign policy is also noticeable with Israel preparing to grant ownership of a church in Jerusalem to Russia, as part of a deal to release an Israeli woman imprisoned in Moscow. The building is in the Russian compound in the occupied Old City; the Church of Saint Alexander Nevsky and other buildings were sold in the nineteenth century to Tsar Alexander III.

Palestinian-Russian relations have developed recently, at various political and economic levels. What is new is the religious dimension, which gives the Russians an additional angle on Palestinian affairs.

READ: The apartheid deal of the century

Putin's interest in the efforts to preserve and support Orthodox properties in Jerusalem appears to be in part to prevent Jewish settlers buying or taking them. The Patriarch thanked the Russian President for his support, and his 2016 donation towards the restoration of the Church of the Nativity in Bethlehem.

Coincidentally this week, the Israeli Supreme Court overturned a decision made last June for the sale of a property belonging to the Greek Orthodox Patriarchate in the Old City of Jerusalem to the Ateret Cohanim Settlement Association. Palestinians are concerned about such transactions because the Orthodox Church has the largest property portfolio in Palestine, second only to the Islamic religious endowments. Abbas does not challenge the Church about selling its properties to settlers, despite Arab Christian complaints, probably because Russian approval is needed for such sales. The Church does not seem to be too worried about disposing of its property in this way, though. 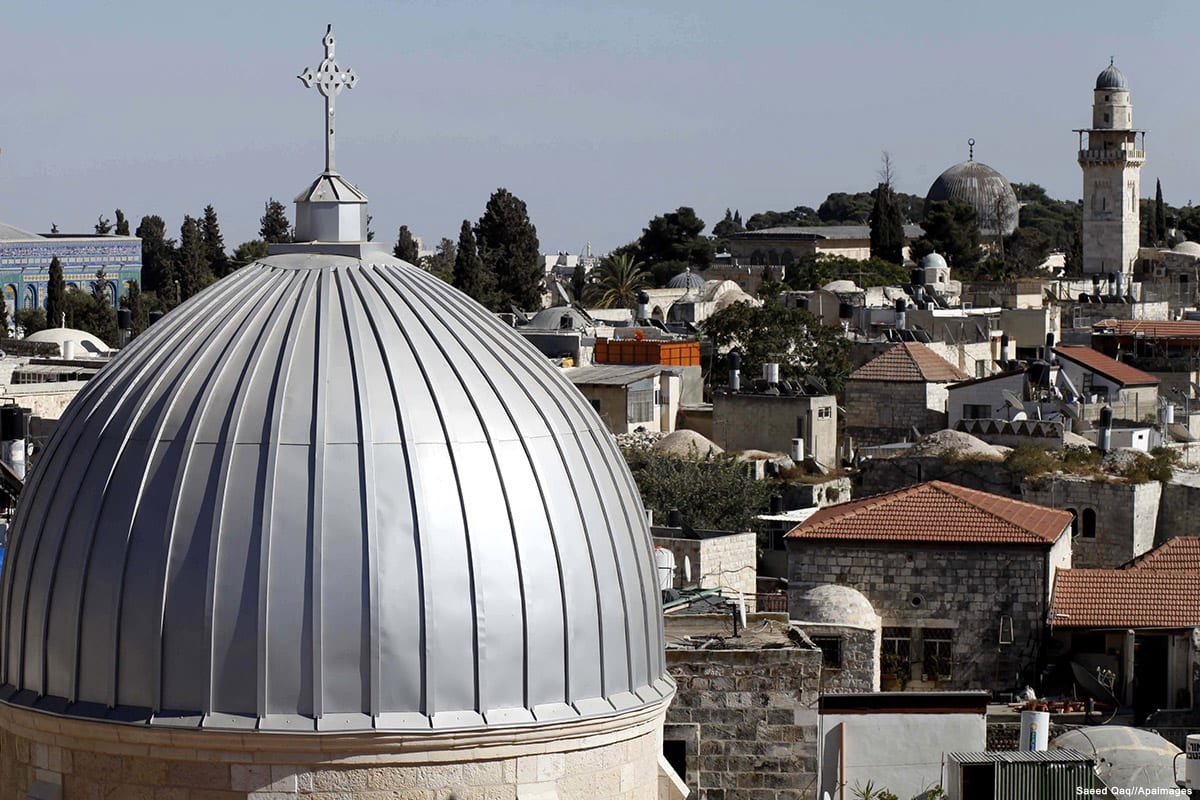 Palestinians speak of complicity with the occupation authorities by some Orthodox officials by handing their properties to settlers for personal gain. Others speak of real corruption within the Church leadership. Russia may not be far from also doing property deals with settler groups.

Russian Christian tourists visit Palestine to see the Orthodox churches, historical properties, and archaeological remains in Jerusalem, Hebron, Jericho and Bethlehem. This may explain Putin's increased interest, even though the PA has no ability to stop the leakage of Christian properties to the settlers because Israel imposes its own sovereignty over Jerusalem.

Palestinian church sources show that one per cent of Palestinians in the occupied territories are Christians; that is around 450,000 people distributed across the West Bank, East Jerusalem and Israel. Of them, 51 per cent are in the Greek Orthodox Church, and the rest are distributed among seven churches, the most important of which are the Roman Catholics and the Protestants.

READ: Who is Archbishop Atallah Hanna, and why does Israel hate him?

The main reasons for the shocking fall in the number of Palestinian Christians living in the cradle of Christianity is their emigration due to the ongoing Israeli occupation, the bad economic situation and their wish to live in a safer country. Putin said last year that the situation of Christians in the Middle East is "catastrophic" and the Russian leader described his October 2015 military intervention in Syria as a holy war to protect the Christians there.

Does this mean that Russia is returning to its pre-Communist Christian roots? In Palestine, at least, religion seems to be used to boost Moscow's influence.

In October, Putin expressed his negativity towards the US "deal of the century", and said that he had proposed negotiations in Moscow between the Israelis and the Palestinians, but to no avail. This was seen by the Palestinians as support for them in the face of US pressure to accept the deal.

The Russian position is that the cause of violence in the region is the failure to resolve the Palestinian issue. Nevertheless, Russia has strong relations with Israel, where 1.5 million Soviet/Russian Jews live.

The Palestinians' support for Russia's recent positions does not mean that they are interested in shifting from exclusive US mediation to Russian mediation. They want international mediation, and Putin's position on the "deal" encourages the Palestinians to continue to reject it. This isolates the US even more and increases its hostility to legitimate Palestinian rights.

Russia's desire to fill the void left by Washington in the Middle East and its use of the Palestinian issue to increase its influence is obvious. The Palestinians can take advantage of the polarisation between Washington and Moscow, by pushing the latter to side with their cause. The Russians are relatively balanced in their positions, though, since they also share strategic interests with Israel.

Even so, the Palestinians welcome partnership with the Russians without turning their backs on the Americans. They wish both to be more equitable when it comes to Palestinian rights. Contacts with Russia mean that the world is not governed solely by the US and help to maintain Palestinian visibility internationally. Such contacts may also help to thwart the "deal of the century" revealed this week in Washington.

READ: Israel's Netanyahu to discuss US peace plan with Russia

Furthermore, Russia is one of the few countries in the world that has links with all of the main Palestinian factions, unlike the Americans, which should make them more representative when seeking to mediate. Israel, though, does not want to use any other country apart from the US to be in its corner, which may block or slow Moscow's progress in this regard.

According to the Palestinians, Russia is pushing the US out of the Palestinian file by using its alliance with regional powers opposed to Washington, such as Iran and Turkey. Moscow also points to its political and military achievements in Syria, which have encouraged it to intervene elsewhere.

As a veto-holding member of the UN Security Council, Russia's positive involvement in the Palestinian arena can help to strike a balance in the face of US bias towards Israel. That's yet another reason why Israel will only deal through Washington.

At the moment, therefore, Russia's role is restricted to receiving political delegations and making diplomatic statements, without translating them into action on the ground. While there are clear Christian dimensions to Russian foreign policy on the Palestinian-Israeli conflict, American support for Israel also has a Christian dimension, notably the strong influence of the Evangelical Zionists who back Israel, right or wrong.

Given the obvious Jewish-Orthodox Christian-Evangelical Christian influences, therefore, it is no wonder that the world rejects any Palestinian attempts to link the conflict with Israel to their own ideological beliefs based upon Islam.