Arab normalisation is another attempt to defeat the Palestinians psychologically 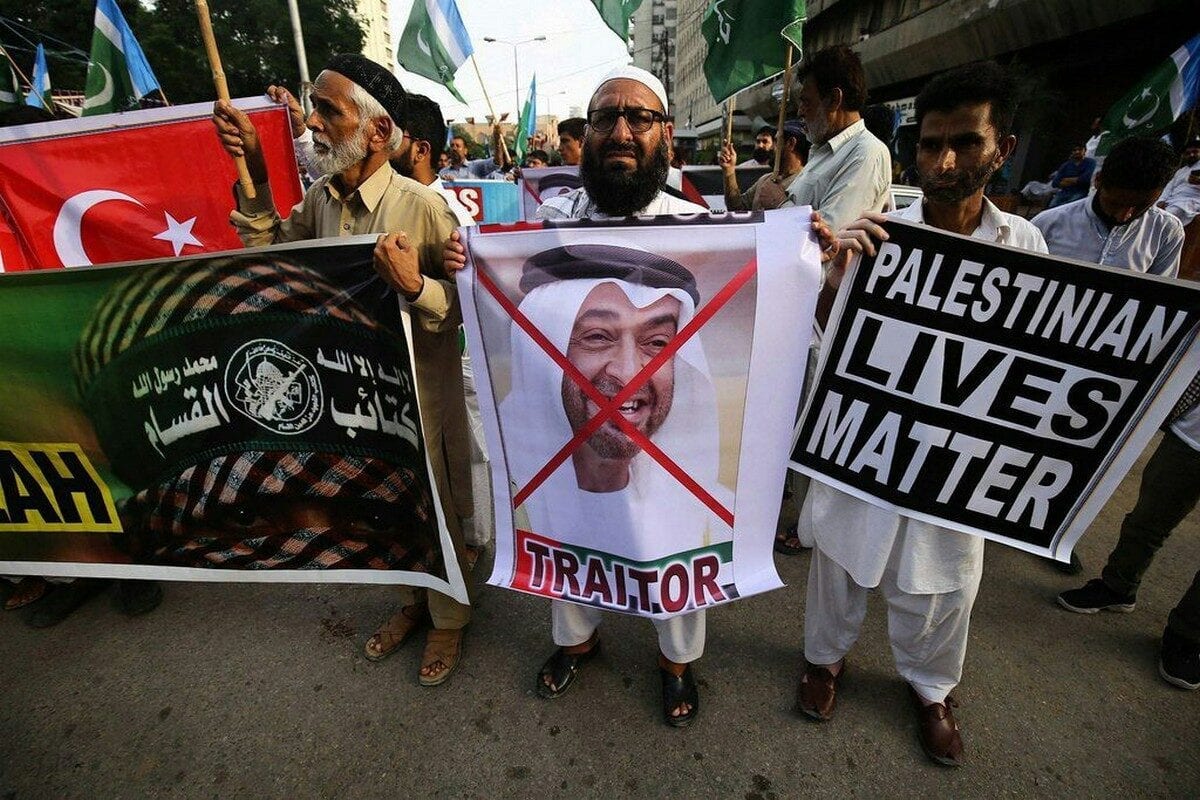 Protest against the normalisation deal signed between the UAE and Israel, 16 August 2020 [mustpakistan/Twitter]

Last week, Israeli Prime Minister Benjamin Netanyahu and foreign ministers representing the United Arab Emirates and Bahrain signed the "Abraham Accords Peace Agreement" in Washington DC which normalises their relations at the expense of Palestinian national and human rights. US President Donald Trump hosted the ceremony and has claimed that these deals are just the beginning and that there will be other countries making similar agreements very soon, ending Israel's isolation in the region and thereby excluding the Palestinians.

The Arab League refused to back the Palestinians and voted down a resolution denouncing the normalisation deals. Earlier, Jared Kushner, Trump's senior advisor and son-in-law, had toured the Middle East to meet with Arab leaders, even those in post-revolution Sudan, which had been promised an end to sanctions and removal from the list of terrorist states if it follows in the UAE's footsteps. By seeking to buy more friends in support of the Israeli occupation and boost his record of achievements, Kushner hopes to deliver more votes to "Trump the peace broker" just in time for the US presidential election in November, all at the expense of the Palestinians.

In order to reduce the cognitive dissonance for the Arab masses, this political process has been synchronised with a public relations and social media campaign promoting a "fascination with Israel". Supporting this effort is the broadcast of stories and films in Arabic celebrating the humanity, beauty and progressive nature of Israel. This discourse completely deletes the Palestinian narrative and the undisputable suffering of the people over many decades. Indeed, it is a campaign that smears the reputation of the people of Palestine, denies Israel's brutal occupation and asserts that Palestinians willingly sold their lands and homes to the Zionist state. This fake narrative asserts that the Palestinians and their complaints are a drain on the Arab world and promotes the hash tag #Palestine is not my cause. All of this is taking place while Israel is demolishing Palestinian homes, killing unarmed Palestinian civilians and arresting Palestinian children in the midst of both normalisation with Arab states and the Covid-19 pandemic.

All Palestinian political parties have condemned the US-brokered accords as a "stab in the back". The Palestinian Prime Minister described them as "black day in the sad calendar" of Palestinian history. They are indeed another attempt to defeat the Palestinians psychologically.

The Palestinian people are undoubtedly outraged by the normalising Arab states and the helplessness of their own representatives. I've seen Palestinians weeping in the streets at seeing the flags of the normalisation countries projected on the walls of Jerusalem. They view the deals as a treacherous betrayal of the Palestinian cause and a belittling of Palestinian and Arab sacrifices over many decades.

I understand that the Palestinian Authority is not against normalisation in principle, but is, rather, against a process of "normalisation" that excludes them as participants. It is one of the ironies of the current process that the Palestinian representatives during the Oslo years have paved the way for Arab leaders to move towards their own normalisation with Israel. Moreover, the PA apprehends that the current normalisation prepares the way for Mohammed Dahlan to replace his adversary Mahmoud Abbas as PA President, being a loyal ally of the US, the UAE and Israel. 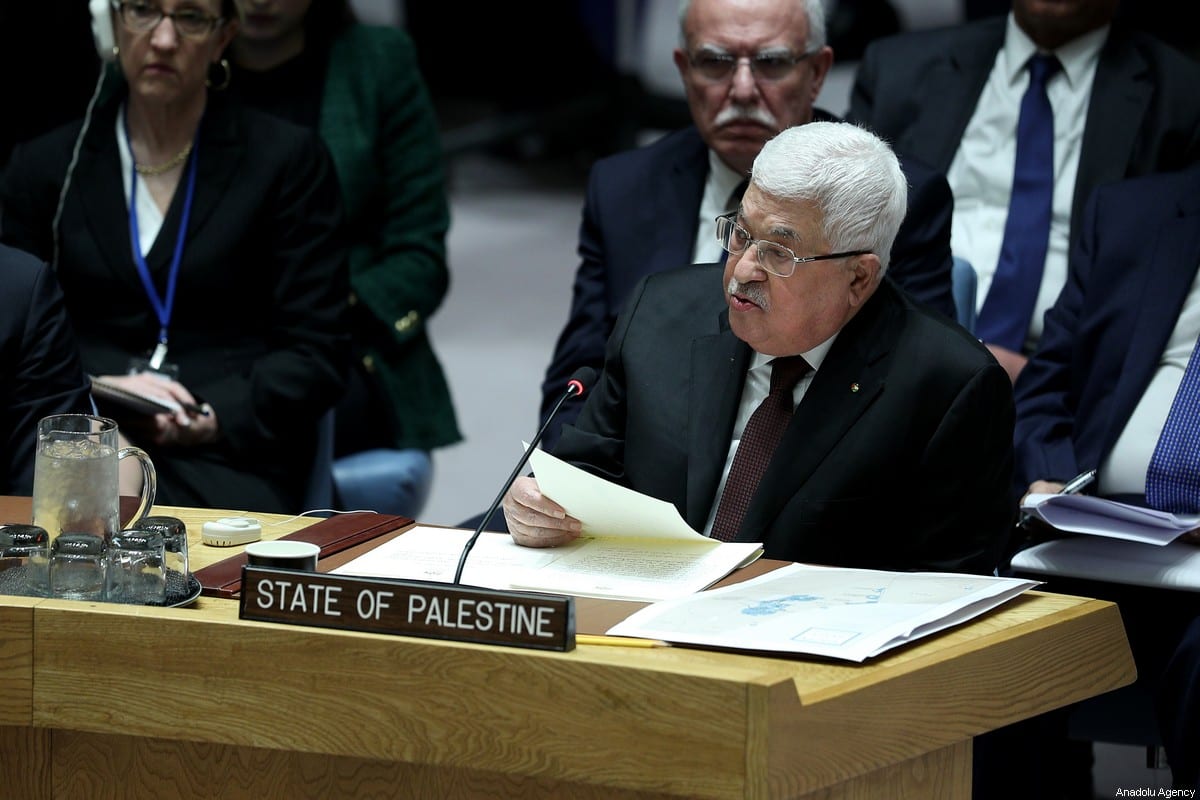 The official call for a "day of rage" on 15 September was not observed by many Palestinians, since many people are fatigued by political hypocrisy and doubt that public mobilisation has much impact on the regional and international world order. Over the Oslo decades, Palestinian representatives — through both conscious and unconscious motivations of their own — have weakened community resilience within Palestine substantially. Legitimate Palestinian resistance was undermined by the absence of democratic processes. Now the Palestinian representatives appear to have recognised that they are powerless within international politics and, as a result, are attempting to revive a Palestinian revolutionary discourse as a means of hiding behind the spirit of the ordinary people.

The very name "Abraham Accords" is misleading and masks the colonial nature of Israel's occupation of Palestine. By presenting it as a religious conflict between the "Abrahamic faiths", Israel erases the political rights of the Palestinians; the occupation is hidden beneath the notion that conflict resolution is about interfaith understanding. The reality is that the enemies of democracy and human rights in the Arab world are realigning themselves in a coalition that tramples Palestinian rights. In doing so, they are destroying the Palestinians' future by withdrawing support from within the Arab world. This process undermines the cultural connection between Palestine and the larger geographical and historical context. Palestinians already feel like orphans; the new normalisation only adds to their sense of abandonment by the bigger "Arab brothers".

READ: This is what the Palestinians need to do to confront Arab normalisation

The ongoing discussion involving yet more Arab countries preparing to announce normalisation with Israel is even more damaging and confusing for Palestine. The Palestinian experience has some parallels with a woman enduring a mass sexual assault; that the crime is done under the protective cover of the group makes the experience even more psychologically damaging.

Nevertheless, let Israel toast its new friends among Arab dictators and enjoy the blessings of the Arab League in the knowledge that these "representatives" do not actually represent anyone, least of all the Arab people. The masses, in fact, remain loyal to Palestine, but are exploited by their regimes that are willing to betray both them and Palestine in return for political and military support from Israel and the US.

When all is said and done, Israel must still deal with Palestinians resisting the occupation at the nominal border fence surrounding the Gaza Strip; at the Dheisheh Refugee Camp in the occupied West Bank; among the Eisaweyeh Jerusalemites; and with others who remain undefeated psychologically. These people and places will remind the Israelis of their unfinished business with Palestinians and the decades of their exploitation of the people and the land. Palestinians have been fighting for their national and human rights for generations and will continue to do so. In a struggle which now takes the shape of a US-European backed but Israeli-led invasion of the Arab world, Palestine remains on the front line in the struggle for justice.